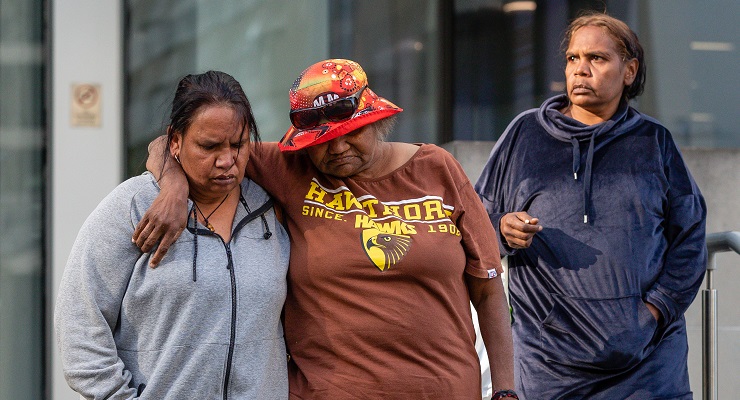 On September 7, 2019 Joyce Clarke was shot by police as she walked down a suburban street in Geraldton. She was carrying a large bread knife in one hand and small pink scissors in the other. Hours earlier, she told her family she was going to die.

At 6.30pm that night, her prediction came true. It took the police officer charged with her murder 16 seconds to arrive at the scene and fire the shot that ended her 29-year life. Last Friday, the officer was found not guilty of murder.

Clarke’s trial was shrouded in secrecy. A suppression order was placed on the officer’s name due to safety concerns for his family. The media was allowed in, but the public was refused entry to the court.

This isn’t the first time the WA Supreme Court has suppressed information over those charged with murdering Aboriginal people. In 2016, the same court issued a suppression order over the name of the Kalgoorlie man who killed Elijah Doughty, a 14-year-old Indigenous boy. The man was eventually given a road traffic conviction.

There were no Aboriginal people on that jury and there were none in the murder trial for Clarke.

Clarke’s family, including her sister Bernie Clarke, maintained their steady presence through the trial, although it was hard for them to hear the final details of her life. During a demonstration of how a taser works, defence barrister Linda Black began laughing loudly. She later told the jury that Clarke was a “walking time bomb” and a person who “needed to be taken down”. In her opening address, Black said the case had “nothing to do with race”.

Seven days before her death, Clarke had called 000 because she wanted to end her life. This was known by Senior Constable Barker on the day she died. He had approached her with his hand out, wanting to “communicate”, when the constable responsible for her death appeared and shot her.

Barker, who was only a few metres away from Clarke, was clear in his evidence that Clarke had not moved in a threatening way. Other officers gave similar evidence that she had not moved when shot — evidence that contrasted with that of a civilian witness who, at some distance, claimed Clarke, arms in the air, had lunged at the officers before being shot.

There’s no doubt Clarke was in a bad way. She had recently been released from the overcrowded Bandyup prison for stealing a mobile phone she believed was possessed by spirits. The prison is known for its appalling conditions, with reports of abuse of Aboriginal women.

Just two weeks after her release from Bandyup, Clarke was admitted to Geraldton hospital following a suicide attempt. She was discharged, and less than a week later was admitted to St John of God Hospital in Perth for mental health issues.

Anne Jones, whom Clarke called mum, asked a nurse not to release her due to concerns she wasn’t well enough to leave. Clarke was discharged because there was no evidence she was still experiencing psychosis.

She left the hospital on Friday, September 13, taking a bus back to Geraldton to stay with relatives. The next Tuesday, in a state of distress, she went to the Wajarri Aboriginal community organisation. She called a relative, warning she was going to die.

A relative called the police to try to get her taken back into the hospital. That was when police arrived — a total of three police cars and eight officers.

The jury took just a few hours to hand down the not guilty verdict, accepting the defence argument that the officer had acted in self-defence. Aboriginal women have long been seen as angry, violent and unworthy of legal protection.

Clarke’s family were distraught. Aboriginal elders began crying outside the court in disbelief that so little had changed. Although police told the defence not to exit the court’s front door, defence lawyer Linda Black did so, telling the family — surrounded by a police barricade — that her client was “sorry” but did what had to be done.