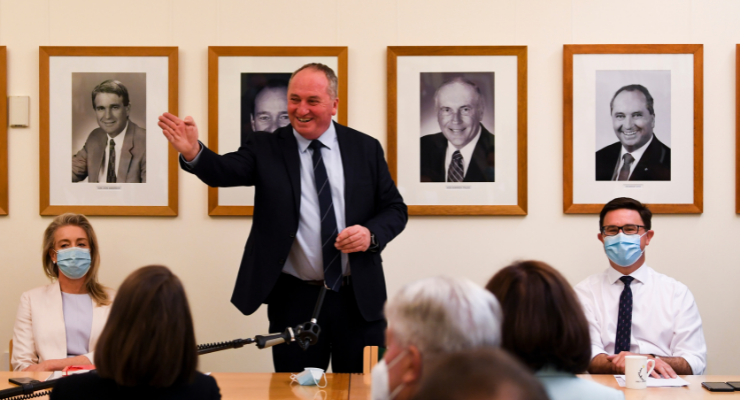 Morrison’s deal comes with a price tag of billions in spending on the regions. We might learn more after the Coalition joint partyroom signs off on the deal. But so far there are a lot of unanswered questions.

What’s in the plan?

“Technology not taxes” is the Morrison government’s team line on emissions reduction. The government has hinted at using “incentives” to reduce emissions in heavy industry, and wants to keep coal running as long as possible.

Expect major investment in clean(er) technologies like hydrogen outlined in the government’s roadmap, as well as investment in electric vehicles. Also expect a lot of spin after the big reveal.

What did it cost the government?

Getting the Nats on board comes with a price tag, but the government has refused to say how much. We know one of their demands has been met, though — yesterday afternoon Morrison confirmed Resources Minister Keith Pitt had been elevated to cabinet. The Nationals now have five ministers in Morrison’s 24-strong cabinet.

In terms of other concessions, broadly expect five-yearly Productivity Commission reviews on the impact of net zero on the regions, big spending on regional infrastructure (including beloved Nationals’ boondoggles like inland rail), a regional futures fund and tax perks for farmers who use carbon abatement.

But how much will it all cost? This morning Finance Minister Simon Birmingham refused to say on the ABC’s Radio National breakfast show just how much, but “billions” has been tossed around. Expect the exact price tag to be covered up as “cabinet in confidence”. Remember: technology, not taxes.

Will it actually reduce emissions?

A few things. First, net zero by 2050 kicks things a long way down the track. Second, some of the technologies outlined by the government in its technology roadmap, like “blue” hydrogen and carbon capture and storage, aren’t particularly effective at reducing emissions.

Then there are the boondoggles. The business case for an inland rail extension indicates it will help increase coal exports. We don’t know how many of the government’s concessions to the regions might help increase emissions by stealth.

Why won’t the government commit to a medium-term target?

Countries like the United States and Britain are heading to Glasgow with more ambitious medium-term emissions reductions targets. The Morrison government refuses to improve on reducing emissions 26% to 28% of 2005 levels, despite promising to meet and beat that target, and all states having committed to a stronger medium-term target.

How will the Coalition deal with the dissenters?

The Nats’ agreement doesn’t end the climate wars in the Coalition. Joyce will go to an election selling a policy he doesn’t believe in. Senator Matt Canavan is still publicly arguing against net zero. And that division could cause the Coalition electoral discomfort in Queensland coal country — Colin Boyce, the LNP candidate for the Central Queensland seat of Flynn, says he’ll openly campaign against net zero.