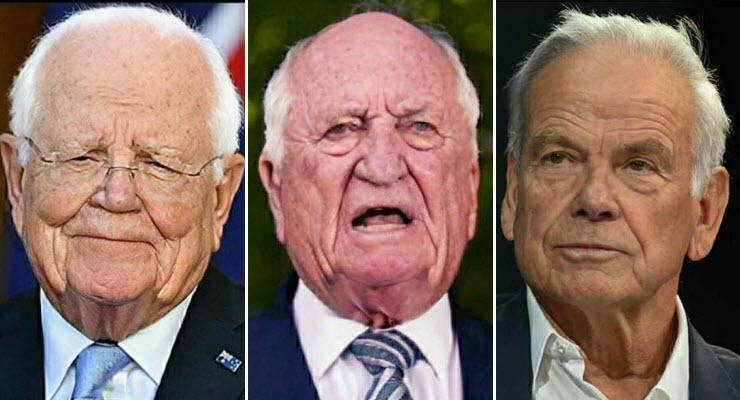 There’s a reason why 2050 is such an attractive target for the Morrison government’s climate plans: none of them will be around to be held accountable.

Scott Morrison will be 82 in 2050, and likely long gone from politics. Barnaby Joyce will be 83 — if he makes it that far, something his complexion and lifestyle would suggest is an open question. Angus Taylor will be 84. Matt Canavan will only be 69, so he may still be adorning the Senate and dressing up as a fake tradie at mid-century. But Keith Pitt will be 81, and Bridget McKenzie will be 80 — her days of pork-barrelling marginal seats well behind her.

They’ll all be enjoying comfortable retirements, perhaps funded by the shareholders of the mining and fossil fuel companies whose boards they may join after public life is over. They’ll be safe from any electoral retribution as Australia succumbs to bushfires, droughts and ever more extreme weather driven by the accelerating global warming they helped enable.

Perhaps they’ll pen the odd op-ed for The Australian — run by 79-year-old Lachlan Murdoch or his sprightly 119-year-old pop — insisting that the devastation inflicted on Australia by global heating is entirely due to natural factors, or that Australia contributed just 1% of the problem, or that no one could have foreseen the damage that would result.

In contrast, 2030 is just three elections away, and one of those is almost due. It’s closer now than the financial crisis is to us; more than a third of the MPs elected eight years ago in the 2013 election remain in Parliament now despite the turnover of prime ministers.

If Scott Morrison harbours Howard-like hopes, he might expect to still be PM in 2030. Certainly, Peter Dutton or Josh Frydenberg, both of whom hope to replace Morrison in the top job, might be thinking they’ll be in the Lodge by then.

And for the large fossil fuel companies that dictate climate policy to the Coalition, 2030 isn’t long-term: major projects decided on now will be hitting their stride in 2030. Santos’ huge investment in the highly emissions-intensive Barossa gas field won’t see any gas piped onshore until 2025; coal-fired power companies are examining the timetables for the shutdown of their plants in the 2030s already.

That’s why a vague target 29 years away is infinitely preferable to actual policies that might have impacts in the next nine years, and for which the current generation of ministers may still be around to be criticised over. Of course, that assumes there’ll be a press gallery in 2030, and one with any kind of institutional memory for what happened five minutes before, let alone in the distant past of 2021.

What might result by 2050, however, is something different. The level of voter outrage at the venal irresponsibility of the current generation of political and corporate leaders, who continued to drive fossil fuels long past the point where it was clear what damage would result, might become so great that those who remain of that generation are hauled from their luxurious homes and held to account.

The climate trials of the 2050s — held amid acrid bushfire smoke on a 50 degree day in Sydney or Melbourne — might provide at least some justice, if little comfort to our children and grandchildren whom we’ve betrayed.