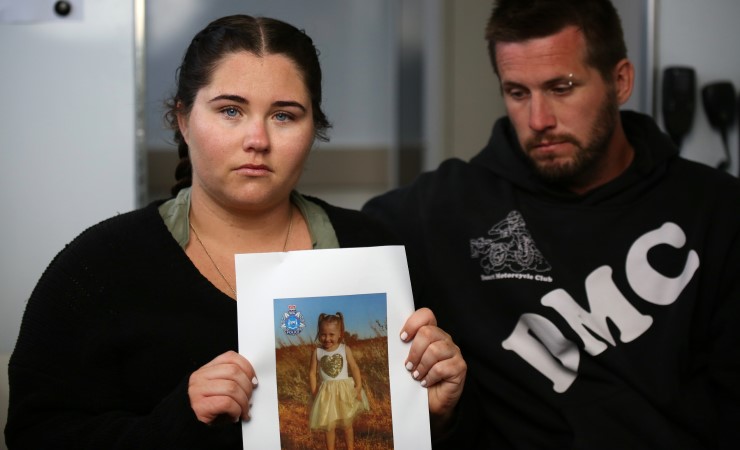 Just over a decade ago, I lost my youngest daughter at a shopping centre. She was in aisle three one moment, gone the next.

I remember racing between aisles, oblivious to the stares. Sweaty palms. Racing pulse. Shallow breathing. Crying out her name so everyone could hear.

Most parents will have a similar story. Your mind goes immediately to the darkest corner: has she escaped to the busy car park? Is she with a stranger? All rational thought is stolen by something heavy that grows in the pit of your stomach before threatening to choke you. Could someone have snatched her?

My four-year-old, with a huge grin, was found hiding in another aisle 15 minutes later, squashed in between cans and boxes in a game of hide-and-seek only she was playing. I hugged her, shaking, until she pleaded with me to stop.

This week that same feeling was palpable. Cleo Smith is four too, and we could all see the distress etched into the face of her young mother, Ellie.

In those first few minutes, Ellie might have wondered if her little princess had wandered off. But now she knows that’s not the case. She was not tall enough to undo the zipper of the tent where she was put to bed.  Besides, if she had wandered off, wouldn’t her sleeping bag have been found?

How could a child disappear from a busy camping ground, metres from the adults who’d put her to bed only hours earlier? How could Cleo, like William Tyrrell in September 2014, just vanish — in his case, still not found seven years later?

When Madeleine McCann disappeared from her family’s holiday rental at a resort in Praia da Luz, Portugal, in 2007, it made world headlines. We all hugged our children a touch tighter, vowing to vet babysitters better, and to keep them close always. We joined millions of others looking for little Madeleine, with that unusual coloboma mark in her eye, in malls across the globe. And we’ve never forgotten her name.

Why is it different with Cleo? Are we trying as hard as we did back in 2007?

Surely policing has advanced since then. Surely CCTV cameras, despite the remoteness of the camping site, are filled with clues somewhere. Surely someone heard something, saw something.

Cleo’s life depends on it.

Police, no doubt, are doing their very best. But can’t we help too? Why aren’t the big corporates digging deep to add to the million-dollar reward, or charter search planes, or offer to fund ground walkers? Facebook says it wants to work for the good of our children. It’s got an almighty opportunity now. And it’s silent.

What technology might help track her movements, or the movements of every single person in the area that evening?
What have we learnt from the William Tyrrell investigation that we might do better this time?

Could our politicians do more, rather than blather on about issues that don’t mean much to any of us?

This nation needs a smile in a news landscape littered with coronavirus and climate change and political horse-trading. Finding Cleo alive is becoming that needle in the haystack.

Someone knows something, and that someone cannot be as clever and as well-resourced as a nation determined to find a little girl who should be home today, playing with her baby sister, Isla.