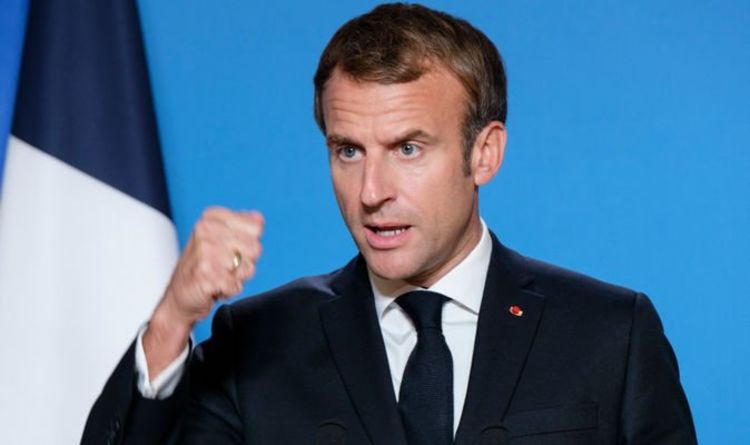 Franco-British relations have reached a new low in a row over fishing rights. But one EU official believes French President Emmanuel Macron is simply “overplaying” the dispute ahead of upcoming presidential elections. The UK recently approved 15 permits for small French fishing boats in UK waters.

In retaliation, officials fear France is planning a go-slow strategy for customs checks on British-bound shipments.

The Sun reports French leaders will introduce more physical checks at the border if they can’t get the support they need from the EU to make Britain concede.

News of the ‘go slow’ strategy was met with criticism on social media.

Nile Gardiner, a former aide to Margaret Thatcher, took to Twitter to say: “This is insane.”

While Robert Sessford wrote: “Time for a full embargo of French goods then.”

Another user, Stanley Walker, wrote: “This is all out war.

“[The] Government must not back down.

“Do Not wait act now by transferring shipments to other countries and ditch French ports for good.”

A European Commission spokesman is reported in MailOnline as having dismissed the claim – made by France’s National Fisheries Committee – that UK and EU negotiators are wrong to review permits at a slow, vessel-by-vessel pace.

“Both sides [are] committed to continue as a matter of urgency to examine the evidence, boat by boat, to find a solution for European fishermen and women, guaranteeing that all who qualify under the terms of TCA (trade and co-operation agreement) can receive their licenses swiftly.”

Another EU official told the paper that Macron is simply playing politics ahead of his country’s presidential election next year.

Macron is said to be worried by the growing popularity among political figures of the EU’s former Brexit negotiator Michel Barnier, who is taking a more critical stance on the EU in the presidential race.

“It looks good for President Macron right now to be tough on the British,” the source said.

One particularly hostile figure in the fishing row is the European Affairs Minister Clement Beaune.

Talking on BFM TV, Mr Beaune fumed about Brexit and said France will disrupt shipments of Christmas goods to Britain if France doesn’t get its way.

He said: “[Britain] failed on Brexit. It was a bad choice. Threatening us, threatening our fishermen, will not settle their supply of turkey at Christmas.”

Because of these threats, Mr Beaune has acquired the nickname “Le Grinch”.

This isn’t the first time France has threatened to play dirty over fishing rights.

Earlier this year, the French minister for maritime affairs threatened to cut power to Jersey in a row over fishing access.

Former Brexit party leader Nigel Farage said: “If the French are prepared to behave like this then thank god we left.”