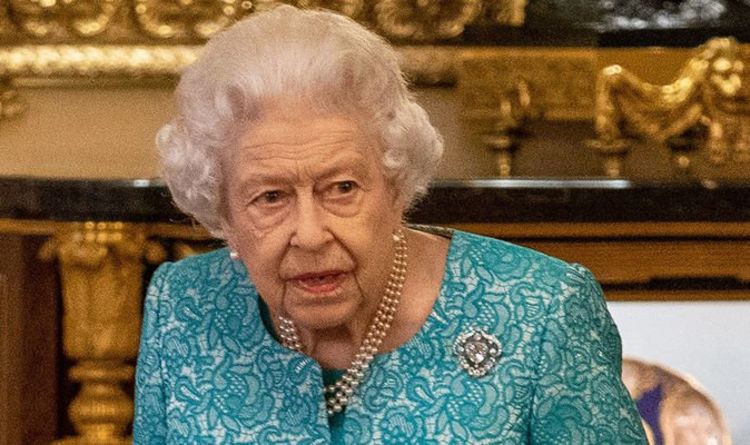 The news comes just days after the monarch’s recent hospital stay. A statement was issued by Buckingham Palace on Tuesday evening to reveal that Her Majesty will not be joining other members of the Royal Family at the climate change summit starting next week.

A palace statement said: “Following advice to rest, the Queen has been undertaking light duties at Windsor Castle.

“Her Majesty has regretfully decided that she will no longer travel to Glasgow to attend the Evening Reception of COP26 on Monday, November 1.

“Her Majesty is disappointed not to attend the reception but will deliver an address to the assembled delegates via a recorded video message.”

News of the Queen’s withdrawal sparked shockwaves across social media, with royal fans and commentators wishing Her Majesty well.

Daily Express royal correspondent Richard Palmer wrote: “In short, the Queen is up to light duties such as reading and signing paperwork and holding virtual meetings but she is not considered well enough to undertake external engagements at the moment.”

ITV News’ Chris Ship tweeted: “The Queen’s decision to pull out of the big UN summit on such an important issue as climate change is a blow.

“She was a big draw for the world leaders. We are told that she hopes no other leader will use her absence as a reason not to attend.”

Other members of the Royal Family including the Prince of Wales, Duchess of Cornwall, and the Duke and Duchess of Cambridge will still attend the climate conference.

The Queen was scheduled to attend a number of events in Scotland as part of a series of royal COP26 engagements between 1 and 5 November, alongside other members of the Firm.

While in Glasgow, she was to greet world leaders from 120 countries including US President Joe Biden.

Royal commentator Richard Fitzwilliams told Express.co.uk: “The Queen will be very sorry not to be there in person, especially given its importance and the Royal Family’s commitment to the environment.

“As she showed with her broadcasts last year, she can convey a message so impressively when speaking virtually. As head of state of the host country, she will undoubtedly do so for Cop26.

“The Prince of Wales, famed for his environmental credentials, will be present as will Prince William, whose Earthshot Prize is a unique contribution to this pivotal issue.”

Mr Fitzwilliams added: “The Queen is a figure of international renown who is universally admired for her dedication to duty. She is doing light duties and conducting engagements virtually at the moment.

“The thoughts of the world leaders who attend the Summit will be with her and she will be with them both in her recorded video address and in spirit.”

On Tuesday afternoon, the sovereign held virtual audiences at Windsor Castle, marking her first engagements after she was ordered to rest by her doctors.

For the virtual audiences, the Queen, 95, donned a bright yellow dress and accessorised with her traditional set of pearl earrings and necklace.

The hospital visit marked her first overnight stay at a medical facility in eight years.

This came after the Queen was advised by doctors against undertaking a royal visit to Northern Ireland.

Prior to this, Her Majesty was last seen in public on October 19, when she hosted a reception for the Global Investment Summit at Windsor Castle.

The Queen was on her feet for over an hour at the evening reception which was attended by Microsoft co-founder Bill Gates and US climate envoy John Kerry among others from the world of business and tech.

The occasion marked one of many in the busy schedule Her Majesty has undertaken since returning from her holiday at her Scottish Balmoral estate.

Two weeks ago, Queen Elizabeth II, who will celebrate her Platinum Jubilee next year, was seen using a walking stick in public for the first time.

She was first spotted using the walking aid at a service marking the centenary of the Royal British Legion at Westminster Abbey.

A few days later, the Queen was also handed the walking stick by an aide as she got out of her car outside the parliament in Cardiff, where she formally opened the sixth session of the Senedd.