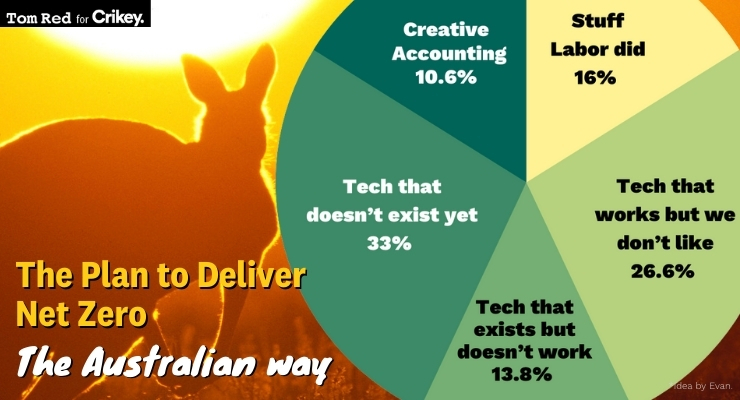 Scott Morrison’s plan for net zero emissions by 2050 is heavy on spin and light on detail, and leaves us none the wiser about the billion-dollar deals struck with the Nationals.

Scott Morrison’s net zero plan is called “The Australian Way”. The name is telling. The pamphlet handed to journalists yesterday containing a series of graphs and diagrams was another sign we’re going our own way on climate.

Beyond the spin and the bluster, the plan (a word mentioned 101 times in the press conference) gave us little new information about how Australia would reach net zero emissions, and left plenty of questions unanswered.

The plan is a nice principle, a sign that even some people in the Morrison government believe climate change is real — if not exactly a priority worth taking seriously. But it won’t be legislated, because legislation is what Labor does. You know the government thinks this is a winner because Deputy PM Barnaby Joyce keeps getting up in question time to accuse Labor of wanting to pass laws.

Exactly how much went unsaid as Scott Morrison announced his plan for net zero? Keep reading.