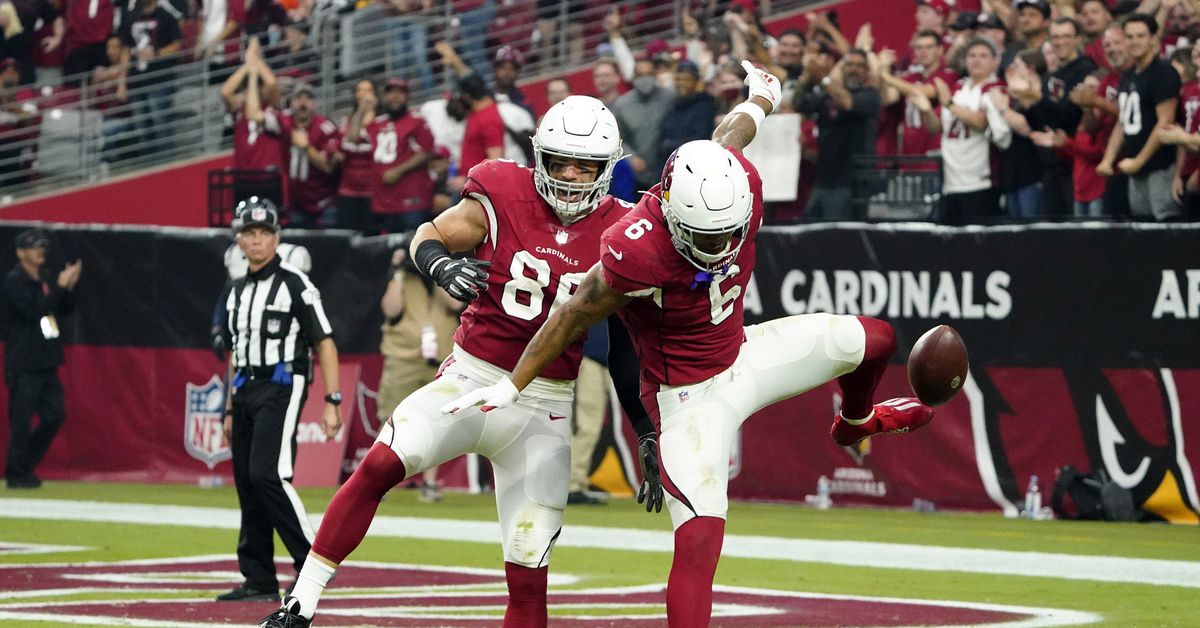 The 2021 NFL season has been one of the most confounding and wonderful in recent memory. Every preconceived notion I had about the year has basically been shattered, and now we’re approaching the midway point with dozens of questions about what will happen down the stretch.

This is parity always desired, but rarely realized in pro football. Almost every division is a tossup, and week-to-week there’s no predicting games outside of obvious, clear locks against teams that have only won a game, or none at all. So this got me thinking, in a year full of surprises, what are the biggest shockers of 2021 so far?

Everything about the Arizona Cardinals

It’s not exactly a surprise the Cardinals are good. I mean, they’ve slowly been trending up ever since Kliff Kingsbury took over. That said, there is a chasm between finishing 8-8 a year ago, to now being 7-0 and controlling the NFC West.

Yes, Arizona hasn’t really played any elite teams on their path to being undefeated — but this is more about how the team is playing that just who they’re playing. We can’t discuss 2021 being a wide open season where everyone is being pushed each week, then retract that and say that the Cardinals just haven’t played anyone good. The fact is they’re succeeding where other teams are struggling, and that’s extremely exciting.

What I don’t think anyone saw coming was how good this team would be at running the ball this season. Arizona still have an excellent passing game, obviously, and are ranking in the Top 10 — but the run game is currently 5th in the NFL, averaging 136.6 yards per game, and barely behind the Baltimore Ravens.

This is a complete football team and wow, what a delight.

How much the rookie QBs have struggled

We’d become numb to the idea that it takes time for quarterbacks to be good in the NFL, and that’s kinda on us. Yes, rookies entering the league are more advanced than ever when it comes to the conceptual understanding of plays and pacing in the pros, but that doesn’t mean everyone is going to be brilliant from the jump.

A lot of this has to do with 2020 when both Joe Burrow and Justin Herbert lit up the league. Neither were as highly regarded as this 2021 crop of passers, so the expectation was that Trevor Lawrence, Zach Wilson and Justin Field would all be immediately phenoms. That has not happened. Lawrence has been middling, while Wilson and Fields have both been largely terrible.

Mac Jones is really the only rookie passer who’s taken significant snaps and not struggled this season. This is less about their abilities as a whole, and more of a “market correction,” of sorts, where we just need to recalibrate how we think about QBs again.

Tom Brady looking better than … ever?

Tom Brady is good at football, water is wet. Here’s the deal though: While everyone knew Brady would be good, I don’t think anyone saw this season coming. The Buccaneers quarterback isn’t just thriving, he’s obliterating the NFL from the pocket in a way we haven’t seen since 2007 when he threw for 50 touchdowns.

Projections are tricky this year because of the 17 game season, so let’s normalize this for a 16 game slate and compare to that record-setting year with Randy Moss.

With the 17th game added in it’s looking like this will be Brady’s best season ever. At 44 years old.

Matthew Stafford has made a huge difference for the Rams

There was a huge disconnect between fan appreciation of Matthew Stafford, and the league appreciation of him. It’s for this reason when Stafford was traded from the Lions to the Rams for Jared Goff it was met with some bewilderment. To many Stafford was a lateral move, perhaps a slight upgrade — while we slowly learned there were numerous teams trying to trade for the Detroit QB.

Now we know why. It’s not a specific knock on Goff, who honestly is playing fine during a rebuilding year in Detroit. Rather it’s a treatise on how much of a difference a quarterback upgrade can mean to a team with elite personnel at every other position.

The Rams are back to looking like potential Super Bowl contenders in the NFC, and that rebound has everything to do with Stafford.

The NFC North is terrible

I absolutely didn’t have this one on my bingo card. Before the season I would have pegged the NFC North as being one of the closest, most brutal divisions in the NFL next to the NFC West and AFC North.

You had the Packers who we all knew would be good (assuming their issues with Aaron Rodgers could be smoothed over), the Bears who were a playoff team a year ago, and the Vikings, perennial underperformers who had all the talent on paper to break out.

Now, seven weeks in, only Green Bay looks legit. The Bears and Vikings are 3-4 and 3-3 respectively, and there’s nothing to really hang your hat on with either team to believe they’re equipped to make a playoff run.

I’ll admit that I was pretty high on Miami after last season. Here you had a team that vastly outperformed expectations, they had a young nucleus, and a treasure trove of draft picks after fleecing the Texans in the trade for Laremy Tunsil and Kenny Stills.

With the right coaching staff in place it felt like the sky was the limit for the Dolphins, and instead they’ve crashed and burned. There’s no one reason you can point to, but rather the fact they’re just playing really awful football.

This is a young team that no longer looks like they have any chemistry on the field. It’s gotten so bad there are now rumors about whether the team could dump 2020 first round pick Tua Tagovailoa and make yet another trade, this time for Deshaun Watson — who might not even be able to play, depending on how the league addresses sexual assault allegations against him.

This team is a mess.

While we discussed the shifting views of quarterbacks entering the league, it’s still widely regarded that rookie receivers do not excel out of the gate overall. Justin Jefferson was a breakout for Minnesota last season, and a complete outlier who broke Randy Moss’ record while held for over 20 years.

Once again, if we normalize to a 16 game season Ja’Marr Chase is projected to finish with 1,723 yards.

Chase’s immediate rapport with Joe Burrow has been the biggest reason for the Bengals’ success on offense. A widely critiqued move on draft night (including by yours’ truly), Chase’s ability was never in question — but rather whether Cincinnati best used its draft capital just to get familiarity in their offense. Now, seven weeks in, we can safely say this might be one of the best picks in the Top 10.

The Bengals have a handcuff that could make them a dominant offensive team for a long, long time.