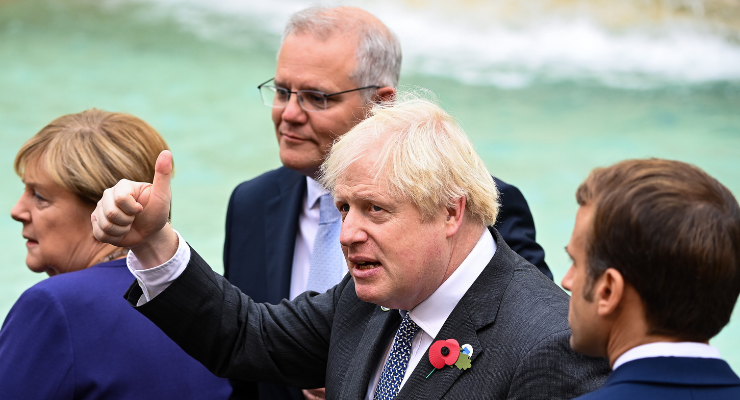 NO PLAN, NO GOALS

The G20 has failed to agree on climate goals after they met in Rome this weekend to lay the groundwork ahead of this week’s UN summit in Glasgow, the SMH reports. Prime Minister Scott Morrison used his final G20 remarks to defend our climate policy amid tense international scrutiny, Guardian Australia says. He also pushed back against mandating action by other countries, the SMH continues, and stressed technology would solve climate change, comparing the mostly as-yet uninvented tech variously to smartphones, silicon chips, and COVID-19 vaccines. He rejected calls to set the date on ending coal-fired power stations.

The G20 countries (plus the EU) make up about 80% of the world’s climate emissions, BBC explains, but the official statement released afterwards didn’t even mention net zero by 2050. Nor was there any target set for phasing out coal — the ABC (via AP and Reuters) reckons it was a “clear nod” to big carbon polluters China and India. British PM Boris Johnson — who is hosting Glasgow’s summit — said the G20 meeting didn’t bode well for the upcoming week, continuing that promises were “starting to sound hollow” and that the commitments were “drops in a rapidly warming ocean”. Johnson actually met with Morrison at the weekend, a confidential talk which cut both of their opening statements short, the SMH continues. Oh to be a fly on that wall.

Victorian shadow attorney-general Tim Smith has resigned from cabinet after he crashed his car while his blood alcohol level was double the legal limit, ABC reports. The Liberal MP was headed home from a Saturday evening dinner with friends in Melbourne when his car hit another car then ploughed into a fence (no one was hurt). Opposition leader Matthew Guy was furious. Guy appointed Smith to the opposition’s top legal gig after being reinstalled as Liberal leader — even though Smith was not a lawyer, Guardian Australia adds. Indeed the Herald Sun ($) called Smith one of Guy’s “most loyal political confidants and advisers”. In a statement after the crash, Guy said he remained “exceedingly angry and disappointed” and implied he had basically told Smith off “in no uncertain terms”, 9News reports.

Smith has lost his driver’s licence for a year, was fined, and could face a court date and conviction. Faceless Liberal MPs told The Age that his safe seat of Kew — “a seat for future premiers” — was probably up for grabs. Under Liberal Party rules, people can be booted during preselection for drink driving offences, and that’s only if Smith doesn’t excuse himself from the race. Just two years ago Smith was a loud voice in calling for Labor MP Will Fowles to resign on Twitter after Fowles kicked a door in.

The travel bubble with New Zealand has officially reopened, Guardian Australia reports, allowing fully-vaxxed Australians in NSW, Victoria, and the ACT to travel across the ditch without needing to quarantine or get an exemption. And our travel bubble with Singapore will be open from November 8, the SMH reports. Prime Minister Scott Morrison and his Singaporean counterpart Lee Hsien Loong finalised the deal on Sunday, allowing fully vaccinated Australians to head over and Singaporeans to come here. Could the next stop be Bali? Morrison also met with Indonesian President Joko Widodo, the paper says, though no deal was confirmed yet. And travel across NSW is now allowed too, news.com.au reports, after being delayed due to low vaccination rates in some regional areas.

In a sure sign of things to come for other states, Premier Mark McGowan has confirmed only double-vaccinated people can go to Western Australia, WAToday reports. The new rule, which comes into action on Friday, affects only Victorians, New South Wales, and the ACT at the moment. But McGowan warned it’ll soon be extended to all Australians, as interstate borders slowly open up across the country in the coming weeks.

If you have a chance today, pop into your nearest Italian cafe and order yourself a Tiramisù, to honour Ado Campeol who has passed at the ripe old age of 93. Campeol was the owner of restaurant Le Beccherie in Treviso, Italy, where the iconic dish was invented in 1972. It was actually created by his wife, Alba, and the restaurant’s chef, Roberto Linguanotto, by combining coffee-soaked biscuits and creamy mascarpone. It was never patented and went on to become perhaps Italy’s most beloved dessert.

But Linguanotto says it began as nothing more than a culinary accident — he was making a vat of vanilla ice cream when a dollop of mascarpone fell into a bowl of eggs and sugar. If you’re thinking “there are eggs in ice cream?!” — well, it depends. Most modern ice cream recipes don’t use eggs, but old fashioned ones do. Anyway — Linguanotto noticed the mixture was delicious, and he called Alba over for a taste test. The excited pair decided to soak some ladyfinger sponges in espresso, smeared the creamy filling on top and finished with a generous layer of dusted cocoa. A star was born. The name Tiramisù actually translates from Italian to “pick me up” — no arguments here.

Hope you indulge yourself a little today folks.

He’s not seeing that any more. He’s seen the Colosseum and the Louvre and he’s changed his mind.

Gesturing vaguely to some fields around him, acting PM Barnaby Joyce said his former colleague Mathias Cormann had gone all Euro on us. The former finance minister — who was a senior figure in the Liberal government that decimated Julia Gillard’s carbon tax — is now calling for a global price on carbon, continuing that such a thing had been his “consistent view” when speaking to Sky News in Rome.

Gladys the fixer looks fixed up

“Berejiklian seems to be treading a very fine line in her evidence between admitting to being in the relationship — the Independent Commission Against Corruption has heard they were in love and had talked about having a child — she is adamant in maintaining it was not of ‘sufficient significance’ to have publicly reported it.

“This distinction is important because the ICAC Act states that all ministers must disclose potential conflict matters that involve a ‘family member’. Under the NSW ministerial code of conduct the definition of a family member includes “any person with whom the minister is in an intimate personal relationship’.”

Voter ID laws come from nowhere, for no reason but to fuel the Coalition’s fightback

“Whatever problems we had with voter fraud in certain inner-city electorates disappeared decades ago, and all the participants are dead (and thus, still voting in ALP internal elections). There has been absolutely zero fuss about voter fraud here, in any sort of significant close result.

“But of course there hasn’t been any serious voter fraud in the US either. The whole thing has been a fiction, built up by the right over the past decade, as it started to become clear that it was being surrounded by new groups of voters — Blacks with higher turnout, Latinos, Asian-Americans, a growing number of the college-educated, a widening gender gap — obstructing the possibility of a Republican majority.”

“As it stands, there is no definitive answer for how unvaccinated people seeking to enter Australia will be dealt with. The conflicting back and forth statements made by Immigration Minister Alex Hawke, Victorian Premier Dan Andrews and Prime Minister Scott Morrison demonstrate that it is far from settled.

“Even if quarantine is on the table for unvaccinated players as Morrison suggested, various players have said they wouldn’t come to Australia again if it was required. And although Djokovic has been the first high-profile case, he’s unlikely to be the last unvaccinated sports star who, by choice or force, will consider skipping a trip to Australia.”

Rivals on world stage, Russia and US quietly seek areas of accord (The New York Times)

Global unity crucial to establishing fair carbon price system — Mathias Cormann (The Australian) ($): “Climate action, to be effective, including any approach to carbon pricing, has to be appropriately globally coordinated, while recognising the different circumstances and the different opportunities in different parts of the world to make their best contribution. That is what I argued in my first speech in the Senate, back in 2007, and that was the message out of the report of the Senate committee inquiry I chaired into the Carbon Pollution Reduction Scheme, and was the underlying principle of my contributions on climate action all throughout my period in the Senate …

“Transparent reporting of climate policy outcomes achieved in different jurisdictions, based on rigorous objectively comparable data, including on implicit carbon pricing — via regulatory measures, subsidies, direct support for technology innovation or other such measures — will help drive better performance everywhere. That is because of the scrutiny it will generate and the platform for evidence-based cooperation it provides.”

Virtue-signalling over substance is why Ardern’s not in Glasgow — Alexander Downer (The AFR): “But Jacinda Ardern, the Prime Minister of New Zealand, has announced she will not bother to go to Glasgow. There hasn’t been a squeak of condemnation from the left. Mind you, given New Zealand poor effort to address climate change, I can’t blame her. Then there is China. When Australia was really looking to its traditional allies for support at the time China imposed sanctions on Australian imports in response to perfectly reasonable suggestions from Australia that there should be an international investigation into the COVID-19 outbreak, New Zealand’s response was to sign an upgraded free trade agreement with China.

“Later, the New Zealand Foreign Minister refused to sign a joint statement with Australia, Canada, Britain and the US — that is, the rest of the Five Eyes partners — expressing concern over China’s behaviour towards the Uyghurs, Hong Kong, the South China Sea and threats to Taiwan. The Foreign Minister said she felt quite ‘uncomfortable’ signing such a statement! No wonder some Australians and Brits say Five Eyes is really four eyes and a wink!”