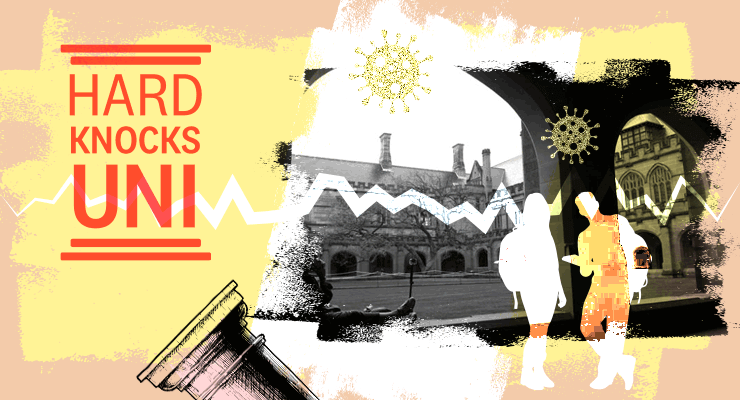 This is part four of the series Hard Knocks Uni: the Crisis in Higher Ed. Read part one here, part two here and part three here.

Never before has Australia relied so heavily on research. The names of the Burnett and Doherty institutes have been burnt into our brains, their modelling guiding us through some of the darkest days the country has faced.

But it’s bodies such as these that could be the ultimate victims of COVID-19 as the crisis sweeping universities hits research funding the hardest.

About a third of all university research is paid for by universities with income primarily derived from international students who have largely disappeared. Even when (if?) foreign students come back next year en masse, there is a multibillion-dollar hole filtering through our most important institutions.

And although the government has gone some way to help prop up ongoing research, academics say this is barely enough to keep the lights on, and many fear they are being pushed towards more industry-funded research at the expense of independent, peer-reviewed inquiry.

The question is: how will Australia conduct vital research in future, and what does this mean for universities as a whole?

It’s almost impossible to answer that without first asking: what are universities for? And what will they stand for after the pandemic?

The answer depends on who you ask. Academics are more likely to believe universities are centres for the pure pursuit of knowledge, but others see them as a necessary gateway to jobs that fuel the economy.

“The idea of what a university is in Australia has always been quite diverse,” higher education expert at ANU Professor Andrew Norton says. “They’ve always had to have multiple purposes for multiple constituencies.”

Unlike many parts of the world where universities are seen as a universal good, Australian universities have also long held a vexed position — they’ve been far more vulnerable to politicisation, leaving them at the mercy of endless culture wars.

With decades of funding cuts, they’ve wrestled back some autonomy by more or less turning themselves into publicly owned businesses.

But this awkward structure faces the ultimate test, with the loss of billions of dollars in foreign student fees and a government that has withheld wage support for university staff. (The complex nature of university funding arrangements means research is funded primarily through international student fees.)

It’s an incongruous situation that the universities find themselves in. Never before have they been so entrenched in Australian life. According to the Australian Bureau of Statistics, more than 35% of Australians have a bachelor degree or higher qualification, and that figure is rising after decades of reform made higher education within reach of not just the rich. Yet the caricature of the musty, out-of-touch institution persists.

At the same time, funding has been halved since 1990, forcing unis to turn to the private sector and international students. Observers say this created an identity crisis which has been exacerbated by the pandemic.

“There’s this uneasy, unstable relationship between those two aspects of the institution now,” historian Judith Brett said. “Sometimes they’ll argue when they’re defending the ridiculous pay of their VC, ‘This is pegged to the corporate sector,’ but other times they’ll be forced to point to the important public functions of the university.”

This might also explain why there has been so little public outrage about the Coalition’s decision to let universities fend for themselves during the COVID economic shock. Not only did it exclude universities from JobKeeper, it introduced the Job Ready Graduates package which doubled the cost of humanities and social science degrees.

“That’s part of the reason why they’ve had a hard time defending themselves,” Brett said. “They’re actually quite unstable as institutions.”

What will universities look like after the pandemic? Some senior insiders fear they could end up with the same inequities as the high school system — the major sandstone institutions will maintain prestigious liberal arts degrees and marginal universities will be left out in the cold to focus on vocational studies or left to wither.

Even those with the most disdain for Australia’s ivory towers would agree that outcome threatens the very idea of “universal” education.

Concerns over the sector’s future are compounded by the fact the crisis is being overseen by a government that has shown outright contempt for higher education and academia through endless culture wars. This seems unique to Australia. In the UK, for example, conservative Prime Minister Boris Johnson has generously supported universities throughout the pandemic. Like American universities, they have been spared from the politicisation that universities in Australia have suffered.

“It’s privatisation by stealth,” Adam Lucas, senior lecturer in science and technology at the University of Wollongong, said. “They suck more and more money out of the sector, making it more reliant on external funding.”

University leaders blame the government, especially in the short term. They worry the long-delayed return of international students — due to start arriving in pilot schemes from the end of the year — won’t bring stability to the sector. Industry leaders like University of Sydney vice-chancellor Mark Scott have warned that without clarity over entry requirements, Australia would struggle to retain foreign students in the longer term. Already the border closures have done immense damage to Australia’s reputation among Indian international students.

What is clear is that for universities to be saved it will require a massive shift in politics and the mindset of a sector that has struggled to fight for its rightful place in Australian society.

Whatever happens, we should remember how we relied on university-based research to help guide us through one of our darkest chapters — not just through economic and health modelling but through the invention of life-saving vaccines.