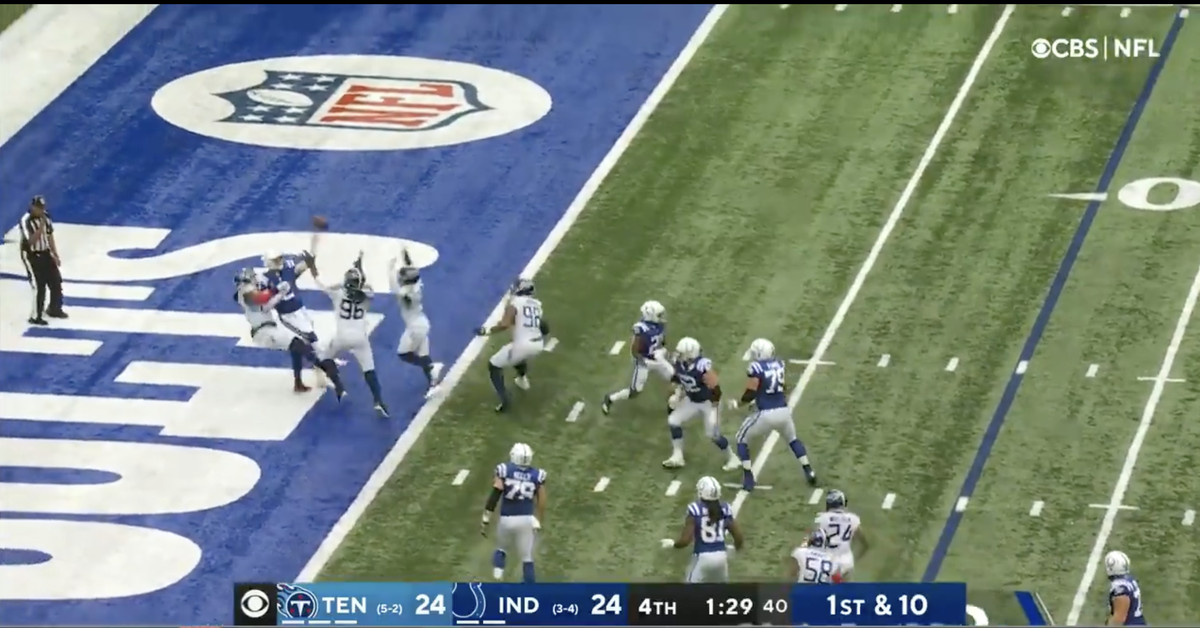 Carson Wentz was having a nice game for the Indianapolis Colts against Tennessee Titans in their Week 8 matchup on Sunday. Wentz had already thrown three touchdowns with zero turnovers and had Indianapolis tied with the AFC South-leading Titans late in the fourth quarter. A win would have lifted the Colts to .500 on the season.

After a Titans punt, Wentz and the Colts got the ball back at their own 8-yard-line with under two minutes to go in regulation and the score tied. That was the beginning of the end for Indy.

On the first play from scrimmage, the Colts tried to run a screen pass. That’s not a great idea when you’re pinned back in your own territory. The Titans’ pass rush came in full force. Wentz was desperate to avoid a go-ahead safety. He chucked the ball with his left hand to avoid the sack, and it ended up in Elijah Molden’s hands for the go-ahead touchdown.

Wentz would have 1:04 left in regulation to redeem himself. He was able to do it thanks in large part to a 42-yard pass interference penalty called on Tennessee that put the Colts on the one-yard-line. From there, Jonathan Taylor scored to send the game to overtime.

The Colts and Titans each punted on their first possession in OT. Wentz got the ball back on Indy’s 15-yard-line for his second possession. A few plays later, disaster struck again. Wentz was intercepted by Kevin Byard, whose return put the Titans in field goal position.

The Titans barely needed to move the ball to boot a 44-yard field goal to win the game. Wentz’s afternoon went from encouraging to catastrophe over the course of a few minutes of game time.

Wentz had only thrown one interception all season, way back in Week 2, before throwing two picks to essentially lose Indy the game. Even as he’s taken care of the football, Wentz ranks outside the top-20 in yards per game and isn’t much better in yards per attempt. The Colts probably don’t want to surrender a first round pick for that type of production, but it’s likely there will be a first rounder going back to the Philadelphia Eagles for the Wentz trade.

The Titans got some horrible news in the win with word that superstar running back Derrick Henry may be out of the season with a foot injury. The Colts now have to dig themselves out of a 3-5 hole if they want to make a playoff run in the AFC. Wentz really wishes he had those two throws back.