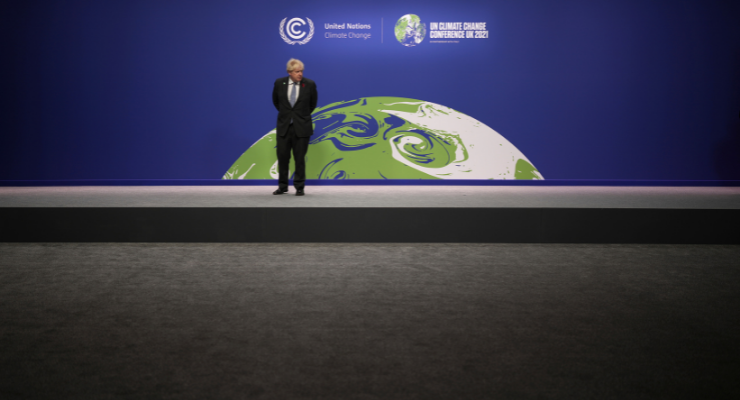 UK Prime Minister Boris Johnson told more than a hundred heads of state that the world’s at “one minute to midnight on the doomsday clock”, ABC reports. Johnson, as the Glasgow climate summit host, has one goal: getting a global commitment to net zero emissions by 2050, as AFR reports. Only 12 of the G20 leaders have committed so far. His motto is “coal, cars, cash, and trees” — end coal-fired power, end petrol-run cars by 2035, get $132 billion a year for the climate, and plant a trillion trees. Johnson did not mince words — he said if the planet warms just four more degrees, whole cities like Miami, Alexandria, and Shanghai would disappear beneath the ocean, as CNBC reports.

UN secretary-general António Guterres said that, since the 2015 Paris Climate Accord, we’ve clocked the six hottest years on record, Reuters reports. He put it plainly: either we stop climate change, or it stops us. Naturalist David Attenborough added that he had seen a horrible decline in nature during his lifetime. “In yours”, he implored perhaps the world’s most powerful people, “you should witness a wonderful recovery”, as BBC reports.

In some good news overnight, Prime Minister Scott Morrison has announced he’ll give $2 billion in climate investment to the Indo-Pacific, doubling our five-year pledge, The Australian ($) reports. It’ll see $700 million go to South Pacific nations who are being “aggressively wooed by Beijing”, the paper adds.

Jilted French President Emmanuel Macron says Prime Minister Scott Morrison lied to him about the sunken $90 billion submarine deal, the SMH reports. Morrison defended himself, saying he expressed concern about the submarine deal’s sluggish delivery, cost blowout, and declining suitability several times before he dumped the French. He named a private dinner between him and Macron at the Elysée Palace in June as one instance where he insinuated he wasn’t happy, The Australian ($) says.

But he admitted Macron was not told beforehand that the French deal was over so we could instead join AUKUS, our British-American security threesome, ABC reports. Morrison said Macron “wasn’t available” for a call prior to the announcement of AUKUS — he implied Macron was screening him to avoid bad news about the contract. It seems Macron really was in the dark about it though: The Daily Telegraph ($) published a text message from Macron to Morrison just three days before the AUKUS bombshell dropped that read: “Should I expect good or bad news for our joint submarines ambition?”. But acting PM Barnaby Joyce basically told Macron to get over it. “We didn’t steal an island, we didn’t deface the Eiffel Tower, it was a contract,” Joyce said, as AP reports.

Queensland Liberal Gerard Rennick has told Scott Morrison he’s going to withhold his vote in the Senate until the government scraps vaccine mandates, Guardian Australia reports. Rennick’s list of demands also includes ending plans to vaccinate children, ending his state’s border restrictions, and getting a better compo scheme for people who have health or employment issues after receiving the vaccine, The Australian ($) continues.

Tellingly, as The New Daily reports, Rennick’s Facebook fans have nearly doubled in the past week, and even though he says he’s not an “anti-vaxxer”, he’s clearly tapping into the highly conspiratorial community. The TGA says only about two in every 1000 people had an issue after the jab, and the “overwhelming majority” of them were fine within a few days. Further, there’s no doubt the vaccine has already saved many hundreds of thousands of lives, as The Conversation delved into.

So is Rennick’s threat worth worrying about? As it stands the Coalition would need four of the five crossbenchers to side with them if Rennick sits out votes — assuming no one from Labor and the Greens vote affirmative either. There are a few big ticket bills coming up though: a federal integrity commission bill, a religious discrimination act, cyber security laws and the controversial voter ID laws, as ABC explains.

It’s an average day in Istanbul and Boji is boarding a metro with other hurried commuters, on the way to one of the Turkish capital’s docks to board a ferry. As the doors close on the carriage, Boji curls into a ball on the floor. Several passengers scratch his head affectionately, and one or two take a selfie with him. Boji is a dog — perhaps Istanbul’s most famous — known for travelling up to 30km a day via public transport. Getty photographer Chris McGrath followed him around for a day and was blown away by Boji’s nous for travel.

He seemed to know where he wanted to go and how to get there, McGrath marvelled — Boji knew exactly where the doors open onto the platform when the trains come to a stop and even has a preferred ferry route — tossing up boarding the one destined for Eminönü but ultimately ducking under the turnstiles for his usual jaunt to Beşiktaş, where the fish market is (McGrath has no idea how he knew). Once aboard, Boji headed to the sunny side of the ferry to soak in the rays with his fellow commuters. He has become so well-known that he has an Instagram and Twitter, and the local government is even creating posters about Boji for the transit system, to provide guidance on how to interact with the worldly pooch. But the fame hasn’t gone to his head, McGrath said. “He just wants to do his own thing and travel around, and he’s quite content doing it”.

Wishing you the wanderlust of Boji today, folks.

The prime minister claimed his French counterpart Emmanuel Macron had slurred Australians when accusing Morrison of being a liar. Actually, the French president said he had a lot of “respect and friendship” for Australia and Australians and continued that it was Morrison’s own decision to renege on the French contract that put Australia’s credibility and trustworthiness at risk on the world stage.

“Lying to domestic audiences is one thing. That merely degrades democracy and the quality of civil discourse. It’s up to voters to punish that, if they wish (the media certainly won’t). But lying to a major international power, one we claim we’re an ally of, to which we are looking for cooperation against hostile interests in our own region, is deeply damaging to Australia’s strategic interests.”

Gladys wrong all over. Ex-premier breaks all the rules of being a witness of truth

“That’s called pre-empting the question; it’s the most common, and worst, mistake a witness can make. It makes them look calculating, and distracts them from their one task: to listen to the specific question and answer it. Berejiklian fell into this trap constantly.

“That’s just a sampling of the forensic reasons why Berejiklian’s testimony was a train wreck. Whether she was telling the truth — whether her evidence should be accepted — is a question for McColl to determine. My observation is only that, if she was a witness of truth, Berejiklian did herself no favours in the way she went about demonstrating it.”

“A satirical post by The Chaser skewering NAB’s lending to fossil-fuel companies has been pulled by Facebook for an ‘intellectual property violation’, with a warning that the group’s Facebook page could be deleted for future posts.

“Last week The Chaser and environmental advocacy group Market Forces took the liberty of rebranding NAB to ‘NOB’ to highlight the $2 billion lent to Australian companies expanding their fossil-fuel operations … Shortly after the administrators of the page were shown a message saying that its post was reported for breaching Facebook’s intellectual property rules.”

Sophia calls it the ‘alcopops of finance’. How do you avoid the buy now, pay later debt trap? (ABC)

He brokered apartheid’s end. Can he save South Africa’s liberation party? (The New York Times)

Luton man left shocked as his house is ‘stolen’ (BBC)

First a child like Cleo Smith disappears — then psychics pounce — Gary Nunn (The SMH): “Why do police give them oxygen? Three main reasons: they’re alert to psychopaths making a coded murder confession under the guise of being a psychic to play games or absolve guilt (not that this has been suggested in any of the cases referred to here); families of missing people urge them to; and simply because there are believers in the police.

“Amanda Berry’s story shows how sinister this can get. Psychic medium Sylvia Browne on the Montel Williams Show told Amanda’s mum her daughter — who’d been missing for 18 months in Cleveland, Ohio — was dead. You can see it in her face when she’s delivered the ‘news’: she’s devastated. That month, she packed up Amanda’s room. That year, she stopped buying Amanda gifts. Six months later, she was dead, sources say, of a broken heart. Amanda was alive the whole time, held hostage in Ariel Castro’s basement.”

I just turned 60, but I still feel 22 — Margaret Renkl (The New York Times): “Thanks to that immense, unwarranted luck, I have lived long enough to be surrounded by the truest possible friends. Sixty years have given me time to learn that true friendship comes not from proximity — attending the same schools or belonging to the same church or having children the same age or voting for the same political candidates. Friendship is forged across time, through good fortune and tragedy alike, and true friends are those who keep on loving one another even when it isn’t convenient, and even when they don’t always agree.

“I have lived long enough to have learned, too, that what is beautiful and joyful is almost always fleeting and must never be squandered. That rejection rarely bears any relationship to worth. That whatever else might separate us, sharing a love for Ted Lasso is enough common ground to start the harder conversations. That life is too short to wear uncomfortable shoes.”