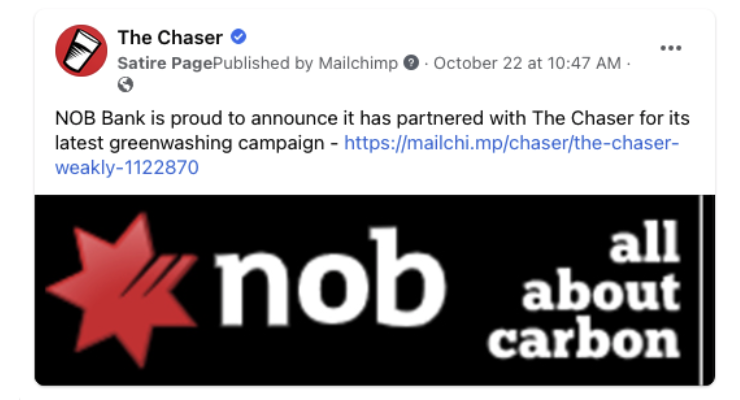 The National Australia Bank was obviously unimpressed with being scoffed at. But The Chaser reckons any publicity is good publicity.

A satirical post by The Chaser skewering NAB’s lending to fossil-fuel companies has been pulled by Facebook for an “intellectual property violation”, with a warning that the group’s Facebook page could be deleted for future posts.

Last week The Chaser and environmental advocacy group Market Forces took the liberty of rebranding NAB to “NOB” to highlight the $2 billion lent to Australian companies expanding their fossil-fuel operations.

“When it comes to climate action, NAB really are behaving like nobs,” campaigner at Market Forces Christian Slattery said. “Pouring money into expansion of the fossil-fuel industry while pretending to support climate action is about as bad as greenwashing gets.”

As part of the campaign, The Chaser posted to Facebook an altered version of the bank’s recognisable logo along with the text: “NOB Bank is proud to announce it has partnered with The Chaser for its latest greenwashing campaign.”

Shortly after the administrators of the page were shown a message saying that its post was reported for breaching Facebook’s intellectual property rules.

“We received notice that this content infringes intellectual property rights, which often means posting someone else’s work without permission or using someone’s brand in a way that is misleading,” the prompt read.

“Clearly we managed to ruffle some feathers at NAB, so it looks like the post worked way better than we’d ever dreamed,” The Chaser’s Charles Firth told The Shot.

“We’re not too worried about a lawsuit either. While NAB may have endless money to throw at lawyers, we have about $10 in the bank and assets totalling to about four outdated computers. So they’re more than welcome to sue us for all we’ve got. Plus the press coverage would be amazing.”

According to Facebook, only “an intellectual property rights owner or their authorized representative may report a suspected infringement”.

This comes after AGL tried unsuccessfully to sue Greenpeace for a satirical campaign that used its logo as a breach of trademark law.