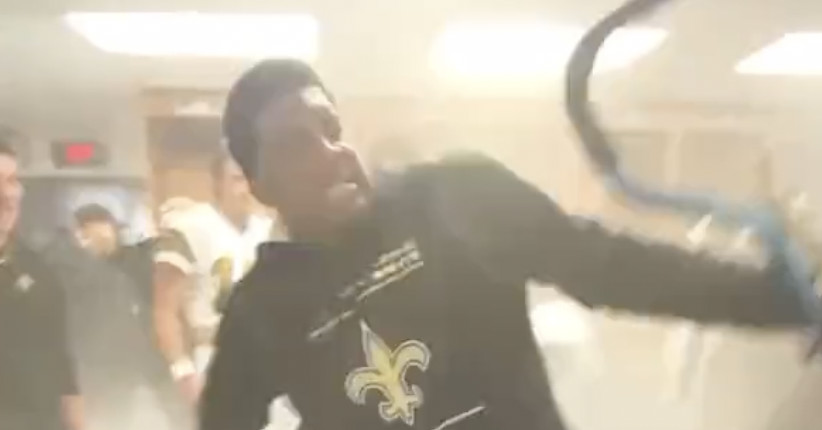 The New Orleans Saints suffered their biggest loss of the season as they won their biggest game of the year on Sunday afternoon against the Tampa Bay Buccaneers. The Saints took home a heart-pounding 36-27 victory over the reigning Super Bowl champs that was marred by a knee injury to starting quarterback Jameis Winston. Winston’s injury is feared to be season-ending, but that didn’t stop the QB from dancing on crutches in the locker room after the win.

Winston was injured early in the second quarter on a horse collar tackle from Tampa Bay linebacker Devin White. Trevor Siemian replaced Winston at quarterback and led New Orleans on five scoring drives. The real MVP for the Saints was the defense, which forced Tom Brady into three turnovers including a game-sealing pick-six late in the fourth quarter.

With the Bucs trailing by two points and under two minutes left in regulation, Brady threw an interception to PJ Williams who took it 40 yards for a touchdown. Watch Williams’ interception here. As the final buzzer sounded on the Saints’ win, everyone awaited a post-game injury update on Winston. Instead, there was the injured quarterback dancing with his crutches in the locker room while his leg was in a bulky cast.

This screen shot feels like it would be a meme if it happened under better circumstances:

Winston exited the game after being dragged down by White by the collar after a short scramble. The QB struggled to walk off the field before heading to in the medical tent on the sidelines. He would eventually take a cart to the locker room.

Winston has an ACL injury, and potentially an MCL injury as well, according to insider Ian Rapoport. Here’s a look at the play he was injured on.

The Saints likely didn’t need any extra motivation in a game against a division rival, but they got some anyway after Tampa Bay cornerback Antoine Winfield Jr. used Winston’s signature celebration to taunt New Orleans following an interception. Winfield’s interception was eventually called back for a roughing the passer penalty. After he made the play, Winfield was seen “eating the W,” which Winston famously created while playing with the Bucs earlier in his career. He did this after Winston was already out with the injury.

White said he and Winston are close, and that he’s praying the injury isn’t serious.

Winston’s injury is obviously a brutal blow for a Saints team that improved to 5-2 in the win. The Bucs fell to 6-2 with the loss.

Winston was off to a great start in his first year replacing Drew Brees as New Orleans’ starting QB. He had 13 touchdowns to three interceptions on the year at the time of the injury. Hopefully this isn’t a season-ending injury, and Winston can return to the field soon. At least he looks like he’s in good spirits after dancing in the locker room.