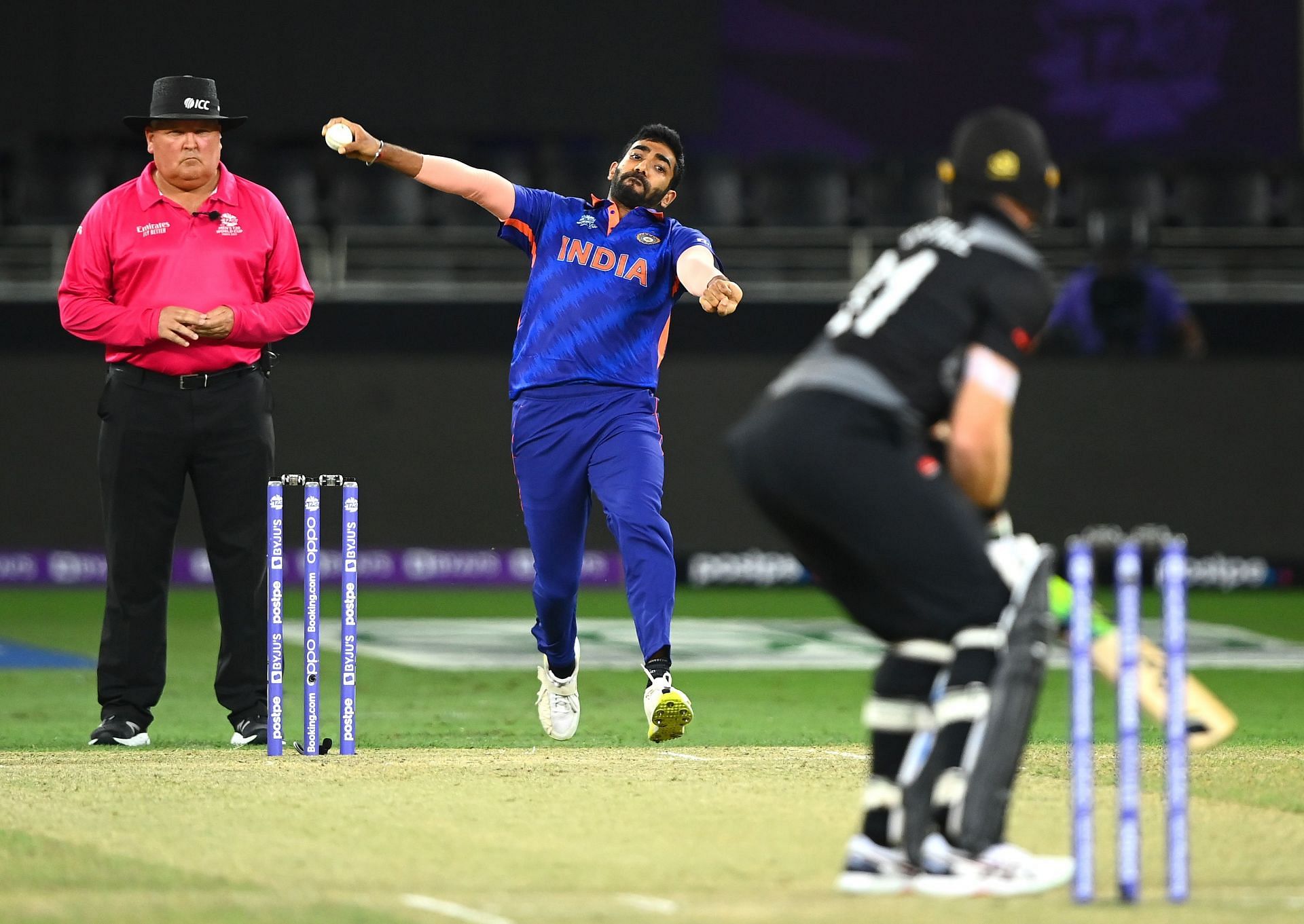 Team India pacer Jasprit Bumrah has stated that his side’s batters made a conscious effort to play more strokes against New Zealand so that they could provide the cushion of extra runs to the bowlers. However, Bumrah lamented that the approach did not come off as stroke-making was rather difficult in the first half.

Sent into bat after losing the toss in a must-win T20 World Cup 2021 clash in Dubai on Sunday, India could only accumulate 110 for 7 in their 20 overs. New Zealand chased down the target in 14.3 overs to strengthen their chances of making the semis.

Speaking after the match, Bumrah explained that the batters’ plan was to try and score some extra runs, keeping the dew factor in mind. At a post-match press conference, Bumrah elaborated:

Bumrah, who was India’s best bowler on the day with figures of 2/19, conceded that batting became a lot easier in the second innings compared to the first. He stated:

“When we bowled length balls in the second innings, it wasn’t holding in the pitch. But, in the first innings, as you must have seen, the pick up and pull shots weren’t coming off and shot-making was really difficult.”

The 27-year-old further revealed that the team had a discussion over how to approach batting in the first innings after dew impacted their first match against Pakistan. Bumrah specified:

“We had a discussion over the fact that in the last game as well the wicket got better in the second innings. That’s why we wanted those extra 20-25 runs so that we could cover for the change in conditions and bowlers could get some margin. The toss became a very crucial factor and that’s why we were keen on scoring as many as we could.”

India could never get going with the bat and had lost half their side for 70 by the 15th over. Cameos from Hardik Pandya and Ravindra Jadeja ensured they crossed three figures.

Bumrah admitted that bio-bubble fatigue does tire the players mentally at times, but added that there was nothing the players could do about it. Bumrah emphasized:

“Absolutely, sometimes you need a break. You miss your family sometimes, you have been on the road for six months. All of that, at times, plays on the back of your mind. But, when you are on the field, you don’t think about all of those things. You don’t control the scheduling. Obviously, staying in a bubble for such a long period of time does play a role on the players’ minds. But this is the time we are living in, there’s a pandemic going on. We try to adapt but sometimes bio-bubble fatigue does creep in. It is the way it is, you cannot control a lot over there.”

Following losses to Pakistan and New Zealand, India only have a mathematical chance of qualifying for the semi-finals. Their next game will be against Afghanistan on November 3.