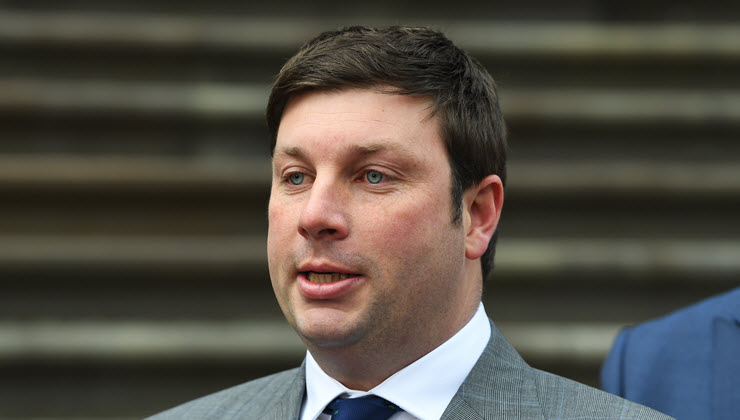 Victorian MP Tim Smith in a very short time became one of the great friends of this column. But, alas, never again shall we be able to call him the man who “calls to mind a kind of Freaky Friday body switch between a small town mayor and a Year 12 student who wears a blazer on free dress days”.

Over the weekend he was like an idiotic Icarus who, rather than flying too close to the sun, drove too close to another car and then a fence. Given the level of alcohol in his blood was more than twice the legal limit, he’s extremely lucky that his role in the shadow cabinet is all he lost.

Smith managed to parlay calling Victorian Premier Dan Andrews “lurch” and a “friendless loser” into a role as shadow attorney-general (despite his lack of any legal qualifications), chummy profiles and a reputation as a possible future Victorian Liberal leader.

And how did he get to this privileged position? Let’s reminisce.

It may be his peak, combining shallow sniping and incompetence like a raspberry swirl. He put together a Facebook poll on whether Andrews should resign — one of those which uses the various emoji reactions as a voting mechanism (“thumbs up to vote yes, love heart to vote no, angry face to vote undecided” etc) — only he’d amusingly rigged it so there could be only one outcome … or so he thought.

Smith had forgotten the “care” react (which looks like a hugging emoji). It came to account for the vast majority of responses he received, thus making him, as we pointed out at the time, the first man to be conclusively trounced in his own rigged push-poll.

The Victorian Libs went hard on Andrews for much of 2020 about the number of COVID deaths in the state. So when Andrews posted a picture of a doughnut to celebrate the state’s first zero-case day for several months, Smith wasn’t about to stand idle. He said the premier really ought to reflect on the following:

After the predictable response — not everyone saw the above as signifying the 800 COVID-19 deaths the state had by then experienced — Smith was unrepentant: “If others see anything else but the figure 800 that is a reflection on them not me.”

In some ways, his last attempt at some weird sniping summed it up. Both his Facebook page and Twitter feed shared photos of stormy conditions: “Great weather for outdoor retail and dining Daniel Andrews?”

Remember: over the past two years, Melbourne has spent more time locked down than any other city in the world. State Labor has just been hit with a series of mucky revelations at the Independent Broad-based Anti-Corruption Commission. Many are concerned about the powers the Andrews government has given itself after the pandemic. In the midst of all that material for an effective opposition to use, our shadow attorney-general decided to see if he could get us mad at the premier because it was raining.

It’s worth noting that while he’s vacated the shadow cabinet, he’s still paid more than $200,000 taxpayer dollars every year to remain on the backbench.

He’s not left politics just yet, though his colleagues would like him to. And, as furious as Liberal leader Matthew Guy reportedly is, he’s provided Smith with a template. If his choice of dinner guests and the fact that he has already led the Liberals to a disastrous election result on the back of some extremely mucky racial politics, who’s to say Smith won’t be back?