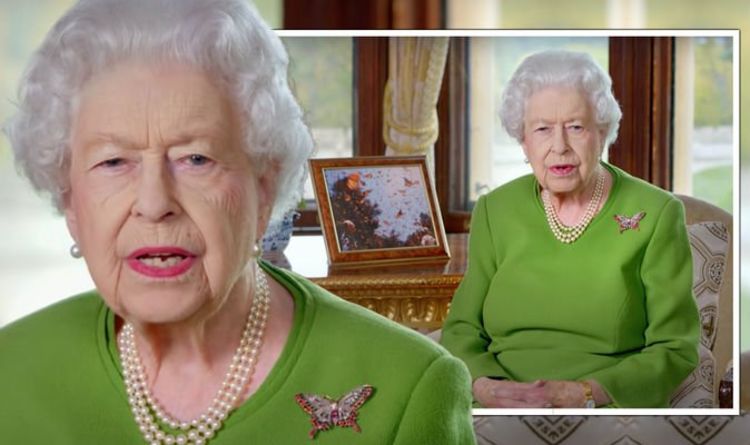 In a pre-recorded video from Windsor Castle, Queen Elizabeth, 95, appeared to acknowledge her own mortality when she warned delegates at the COP26 summit the world needs to act now to tackle the climate crisis. The monarch had been due to attend Glasgow’s summit in person alongside Prince Charles, 72, Camilla Parker-Bowles, 74, Prince William, 39, and Kate Middleton, also 39.

However, the Queen “regretfully decided” to pull out of the event last week after she was told to rest by her doctors following an overnight visit to London’s King Edward VII Hospital on October 20.

Speaking in the 252-second video recorded in Windsor’s White Drawing Room, Her Majesty said: “Of course, the benefits of such actions will not be there to enjoy for all of us here today.

“None of us will live forever.

JUST IN: Royal Family slated for not marking Black History Month – ‘It would have made sense’

The head of state also added: “I, for one, hope that this conference will be one of those rare occasions where everyone will have the chance to rise above the politics of the moment, and achieve true statesmanship.

“It is the hope of many that the legacy of this summit – written in history books yet to be printed – will describe you as the leaders who did not pass up the opportunity; and that you answered the call of those future generations.

“That you left this conference as a community of nations with a determination, a desire, and a plan, to address the impact of climate change; and to recognise that the time for words has now moved to the time for action.”

The Queen’s message was played before delegates at a reception of world leaders at the United Nations’ event in Glasgow.

The monarch said: “I remember well that in 1969, he told an academic gathering ‘if the world pollution situation is not critical at the moment, it is as certain as anything can be, that the situation will become increasingly intolerable within a very short time…

“If we fail to cope with this challenge, all the other problems will pale into insignificance’.”

The Duke of Edinburgh, who had been married to the Queen for 73-years, passed away in April at the age of 99.