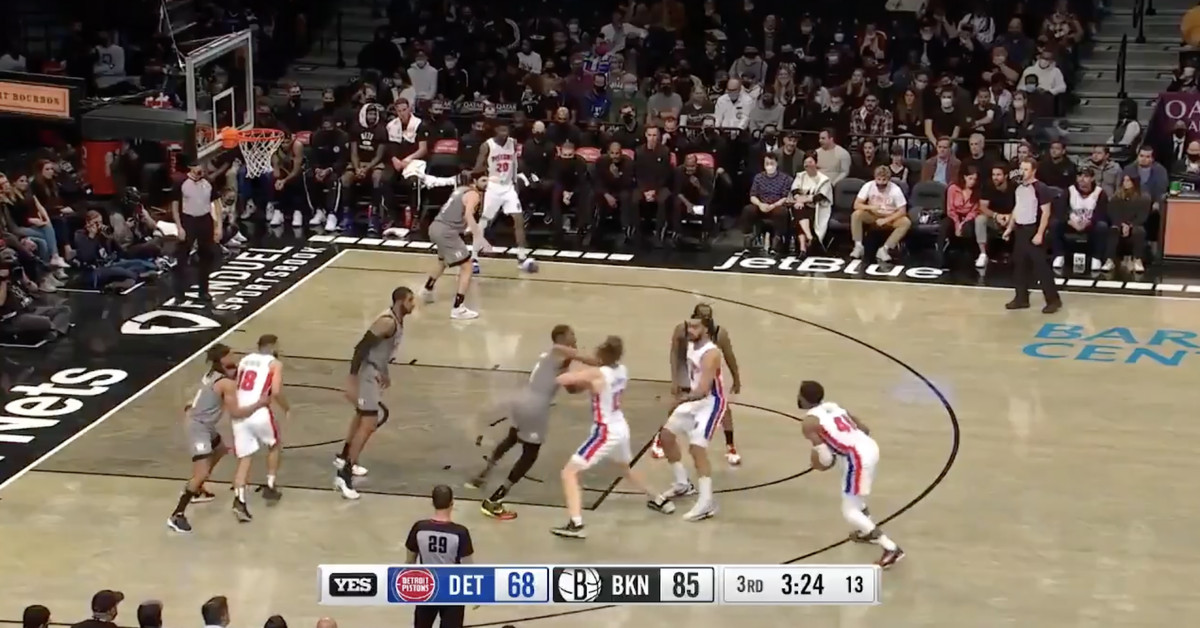 The Brooklyn Nets entered the 2021-2022 NBA season as the heavy favorites to win the championship, but the start of the year has been rougher than expected. Kyrie Irving is out indefinitely after he refused to take the Covid-19 vaccine. James Harden has gotten off to a slow start as he learns to navigate the league’s new rule changes and continues to work his way back from a hamstring injury. Kevin Durant has also been visibly upset at times during Brooklyn’s 4-3 start.

Durant was fined $25K after he threw the ball into stands against the Indiana Pacers on Friday. Two days later, Durant was ejected in the third quarter against the Detroit Pistons for elbowing Kelly Olynyk in the head as he fought through a screen.

Here’s a look at the play. Durant was given a flagrant two foul, but Brooklyn would go on to win anyway, 117-91, over the Pistons.

Here’s another look at the play:

This really should have been Durant’s second straight ejection. The league rulebook says “any player who throws or kicks the ball directly into the stands with force, regardless of the reason or where it lands, will be assessed a technical foul and ejected.”

Instead, Durant was allowed to stay in the game vs. Indiana on Friday. Pacers coach Rick Carlisle couldn’t believe it.

Carlisle on Durant throwing the ball into the stands, but staying in the game after: “That was shocking. … At this point it doesn’t matter because it’s not going to change the outcome, but it’s something that is a significant thing that just can’t be missed.” pic.twitter.com/0Yq6BsP0RG

Durant was on fire against Detroit before the ejection. He still ended the game with 23 points and five assists on 10-of-13 shooting from the field. The better news for the Nets is that James Harden had a triple-double and is starting to look like himself again.

Even after a slow start, the Nets are still going to be a problem.