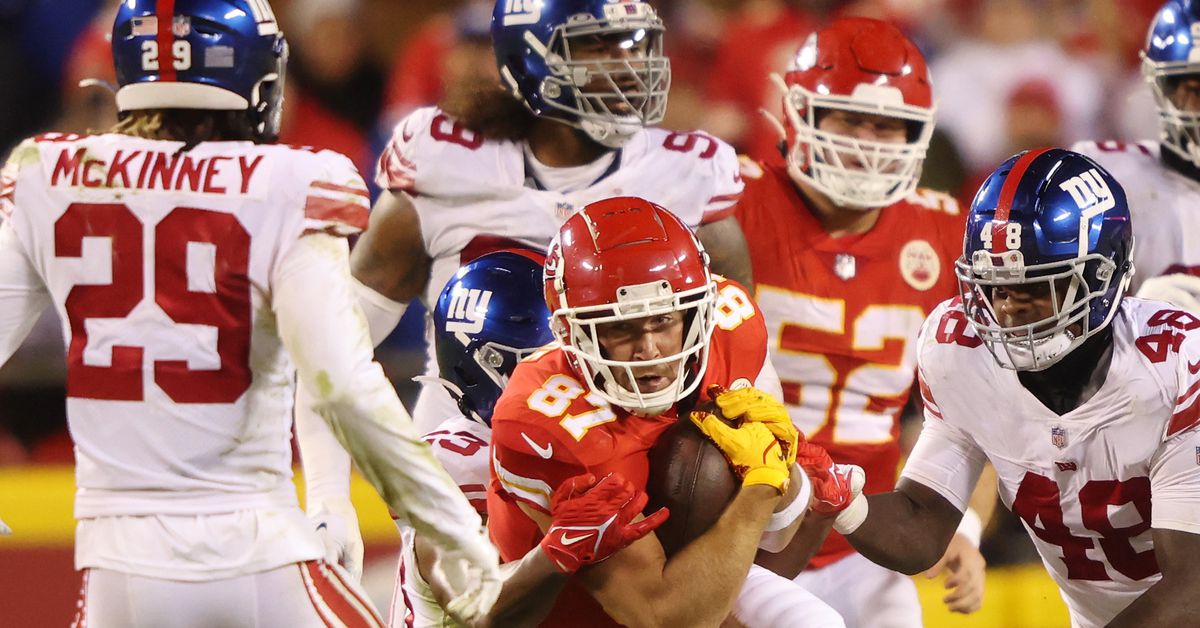 In case you didn’t have a grip on how the mighty have fallen, Monday Night Football had you covered. The Chiefs, perennial AFC powerhouses, are now struggling to beat the New York Giants, a team that entered Week 8 with a 2-5 record and not much to show for it.

This isn’t supposed to happen, not for Kansas City, and it really underscores how lost this team is. I don’t care that their record is now 4-4, that they could easily make a run and find their way into the playoffs — it just feels like a lackluster, middling season from a team that should be achieving so much more.

The Chiefs’ biggest issue, as it has been as season, is defense. It’s a testament to how good their offense is that this team can somehow still compete at all while giving up 27.5 points per game (24th in the league), 269.8 yards through the air (24th) and 121.8 yards on the ground (21st). There is no defensive area this team is competitive in, yet their keep hanging around.

That was an ugly, bad game on Monday. Kansas City was bailed out by mistakes from New York, and still only won by three. I have no faith in this team.

THE COWBOYS DIDN’T HAVE DAK PRESCOTT! I’m opening today with major emphasis, because this whole situation deserves it. Now, if you think that means I’m about to extol the virtues of Dallas, a team that firmly looks in control of the NFC, well you’re only partially correct.

There is no doubt that the Cowboys are really, really good — that goes without saying. You can’t walk into a primetime game, without your franchise QB, and still win, all while shutting down a top-tier offense without the ability to go all the way. I’ve discussed just how good Dallas is before, so consider that a win, and we’ll move on.

The real story of Sunday Night Football is the hapless Vikings, who just can’t get out of their own way — and haven’t been able to for years now. The issue is there seems to be absolutely no accountability from the Minnesota front office to try and correct these issues, and even as someone with no dog in that fight, it’s maddening.

When you look on paper the Vikings have one of the most talented rosters top to bottom in the NFL. Kirk Cousins is oft maligned, and i’ll admit he’s not my favorite quarterback, but he’s good enough to win games. The offense also has one of the best running backs in the NFL in Dalvin Cook, and two of the best starting receivers with Justin Jefferson and Adam Thielen. On the other side of the ball we have a defense that’s recorded 22 sacks this season, making Minnesota one of the top pass rushing teams in the NFL.

In literally any other organization this would all be a recipe for success, not a team falling to 3-4 in a nationally televised game to a backup quarterback. This is the Minnesota Vikings experience, and this is what’s marred the organization for so much of the Mike Zimmer era.

Failure to execute, penalties that show a lack of discipline, needlessly conservative play calling, and consistently playing up and down to opponents have been the hallmarks of the Zimmer era. It’s like Minnesota never plays their own brand of football, but rather relies on whoever they’re against to set the tone — like a child on a leash being led through Disney World. When talented players finally show the ability to break free, Zimmer pulls them back in to walk at a snail’s pace in a league where everyone else is sprinting.

Vikings fans know this exquisite pain, and can point out dozens of examples from the past — but let’s just look at this season to witness this phenomenon. This team has played some of the best in the NFL. They played the Cardinals close, took the Bengals to overtime, beat the Seahawks when Russell Wilson was playing.

They also lost to Browns, were pushed to the limit by Detroit, needed overtime to beat the hapless Panthers. Now they’ve dropped a game to a talented Dallas team, but led by a veteran undrafted free agent who had been cut and re-signed by the team he just led them to victory.

This kind of inconsistent, up and down play, “good against the good, bad against the bad” play is inexcusable in the NFL. It’s led to Zimmer and his staff coaching scared, typified by their love of third down screen passes that nobody in the stadium thinks will pick up a first, and rarely ever do.

Most egregiously is how the Vikings staff never seems to trust their football players to make plays. Take a look at Cousins’ passing chart from Sunday night, courtesy of NFL Next Gen Stats.

Those are 35 pass attempts, TWO of which were 20 yards or more through the air. Against the Cowboys more plays were drawn up that had Cousins throw behind the line of scrimmage (11) than 10 yards downfield (7). I don’t care if you’re the biggest hater of Kirk Cousins in the world, that is absolutely asinine to have any team trust their offense so little.

At least Justin Jefferson is still excelling in spite of his offense, not because of it — because these routes from Week 6 against the Lions are laughable for a 6’1 receiver with 4.43 speed.

We are witnessing extremely talented players withering and dying in this sad, broken Minnesota system. This team will never excel with coaching in place that trusts “system” so much more than players that athletes never get to perform in service of an ideal.

I know it’s punching down, but at this point I’m not even sure Jacksonville knows how to play football — or how many players should be on the field.

12 men on the field.
Twice in a row.
In the middle of the season.
After a bye week.

This is absolutely on Urban Meyer, though I’m sure he’ll find someone to shift the blame to. Any excitement over this team’s win in Week 7 was washed away by getting blown out by Geno Smith.

This has been the year of Geno Smith, and by that, I mean — a year in which we remember Geno Smith is still in the NFL. Russell Wilson’s injury has given us the delightful upshot of getting to see Smith again, and it’s always nice to feel young again.

Smith got his first NFL win since 2014 in Seattle’s victory over the Jaguars, who were nice enough to oblige Geno by refusing to play any effective defense. Smith finished 20-for-24, 195 yards and two touchdowns, with another on the ground. It was a great game in its own right by Smith, and a great story.

Loser: Whatever the hell Carson Wentz was trying to do here

We all have the odd brain fart from time to time, but this was incredible. Wentz wasn’t awful on Sunday, but goodness was he terrible when it mattered the most. This interception unquestionably cost Indianapolis the game.

The only bright spot was Colts mascot Blue, who couldn’t even on the missed kick in overtime.

there have been some classic “mascots standing under the upright and getting really upset about field goals” moments over the years but I think this might be an all-timer pic.twitter.com/lE44dvSGN9

Loser: My faith in the Bengals

What the hell was that? I mentioned last week that I’ve felt like a death knell to teams as soon as I start buying in. Heck, I even actively avoided gushing over Cincinnati to stop them falling fate to this.

“To save myself the embarrassment once again I’ve chosen NOT to give Cincinnati props, which honestly Bengals fans should thank me for. I am a kiss of death.”

Then y’all come out and lose to the Jets. Credit to New York, because obviously Robert Saleh knows how to coach and is the right man for the job. His team keeps playing hard even with the season effectively being over, but still I don’t think anyone had “beating the Bengals” on their Week 8 bingo card.

I have absolutely no idea who to buy into when it comes to the AFC. The Bills are the lazy answer, but I mean, they struggled way too much against the Dolphins and have yet to really play a top tier team except the Titans, who they lost to — and the Chiefs, who are frankly a mess this season.

Cincinnati was supposed to be that magic unicorn to come out of the AFC North and teach me how to trust and love again. Now that’s all in tatters.

Beating the Lions isn’t exactly the kind of monumental achievement that deserves to have epic poems written about it, but still that ground game deserves some major props.

Nobody stuffed themselves, but everyone ate. The perfect buffet if you ask me.

Obviously injuries suck, but you best believe Cam Newton was sitting at home a happy man knowing that his phone should ring this week. Unquestionably the best quarterback sitting at home right now without a team, Newton could easily land on the Saints this week and be part of the playoff push, which might be extra sweet considering the Panthers are struggling and Sam Darnold left during Carolina’s win over Atlanta with a concussion.

Newton has the potential rare joy in life of not answering a drunk dial from an ex dying to have you back, then post on Insta with the hottie you’re with now. Keep in mind that the Panthers and Saints have a game left on January two which could be for a playoff spot, and hoo boy do I like that drama.