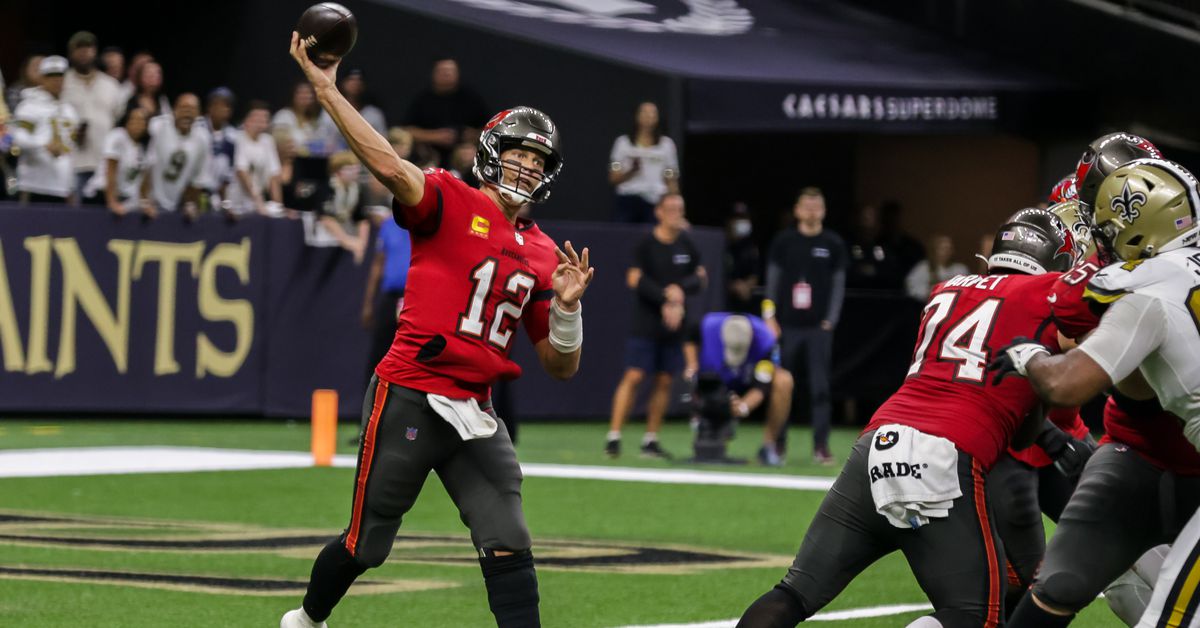 The new 17 game NFL season is turning the league on its head in numerous ways. We’re yet to see how it will effect standings and the playoff picture, but one area that’s really standing out right now is how many records could topple with an extra game added.

Today we’ll look at which NFL records are on pace to fall when the season wraps up. One that we now know will be safe is the single season rushing record. Derrick Henry’s injury will keep Eric Dickerson’s mark of 2,105 yards safe another season, but there are PLENTY of others that are likely to fall.

It’s been a monster year for Brady, but he still would have fallen short in a normal season. Brady projects to 5,300 passing yards in a 16-game season, which would put him third on the all-time list, however with an extra passing game his number swells to beat Manning’s record by almost 200 yards.

Odds it will happen: 80 percent

It would take a serious regression for Brady not the reach the mark considering the teams the Buccaneers face down the back stretch. The only team remaining on their schedule with a top-tier pass defense is the Bills, while also facing Washington, the Jets, Colts and Falcons.

This should be a new NFL record.

I don’t think anyone would have mistaken Cooper Kupp for the greatest receiver of all-time, but Kupp has emerged as Matthew Stafford’s No. 1 target in one of the most potent offenses in the NFL. Kupp has almost eclipsed his 2020 receiving total, now he’s on pace to potentially break the league’s all-time receiving yards record.

Odds it will happen: 50 percent

This is a really close one. We’re talking about margins within half a yard, so obviously it’s tight. The flip-side of this is that Kupp is getting even more targets and opportunities the longer the season progresses. Over the last three weeks he’s caught 26 passes for 401 yards, an average of 133.67 yards-per-game. To break Johnson’s record he needs to average 116 yards per game over the remaining nine games. It’s possible for sure.

Myles Garrett is having a phenomenal season that would translate to almost record-breaking in a normal year. With the extra game he’s on pace to at least tie Michael Strahan’s phenomenal mark.

Every week is like clockwork with Garrett, and it feels like he’s getting a sack every single week without much trouble. All he needs is another 13 in nine games to take the record, which is possible — as ridiculous as that sounds.

Odds it will happen: 30 percent

It’s a brutal back nine for Garrett to achieve this mark, and honestly I’m struggling to see where the sacks come from. Two games against the Bengals will definitely help, but there are other opponents like the Ravens, Patriots and Packers — all of whom protect their QB well, or have quick releases that leads to them not being sacked often. Still, it’s a chance.

We never, ever get to talk about the single season interception record, and for good reason. Dick ‘Night Train’ Lane set the mark back in 1952, and single players just don’t get the opportunity to pick off as many passes anymore. Opposing offenses tend to scheme away from ball hawk corners and ensure they don’t turn over, which leads to nobody standing out as much as Lane did in ‘52.

Case in point: The most interceptions a player has recorded in the last 20 years was Champ Bailey in 2006, and he finished with 10.

It’s a testament to just how ludicrous Trevon Diggs’ season has been that he has seven interceptions already on the year, and keeping that up in the second half of the year seems impossible.

Odds it will happen: 10 percent

This is absolutely not a knock on Diggs, I just think it’s high unlikely teams will keep throwing at him and giving him chances — especially if he records a few more picks. Is it possible? Absolutely. Likely? No.

The Chargers kick A LOT of field goals. An often struggling red zone offense has led to their kicker stepping up over, and over, and over again — almost four times per game on average. Hopkins has kicked 25-of-29 on the season so far, and only needs another 20 field goals in nine games to break the all time record.

Odds it will happen: 90 percent

Unless the Chargers change their offensive identity I see no reason to believe Hopkins won’t be able to cruise to the all time field goal record in a season. He’s on pace to kick nine more than the previous mark, and only needs to average 2.22 a game to make it happen. In the first eight games Hopkins averaged 3.12 field goals per game.

This record is as good as shattered.

How will league records in a 17-game season be received?

As we move forward it’s going to be interesting to see how fans perceive and appreciate record set during the first 17-game regular season. Will there being asterisks attached, either real or imagined? How will we define records that came before, or will we just forget them?

It’s fairly certain that with a 17 game NFL season we will see every major record fall at some point in time, and that’s a bit of a shame — but also incredibly exciting as we see new names added into the annals of legends. Now it’s on fans to see whether they will hold someone like Cooper Kupp or Myles Garrett with the same reverence as Calvin Johnson or Michael Strahan.