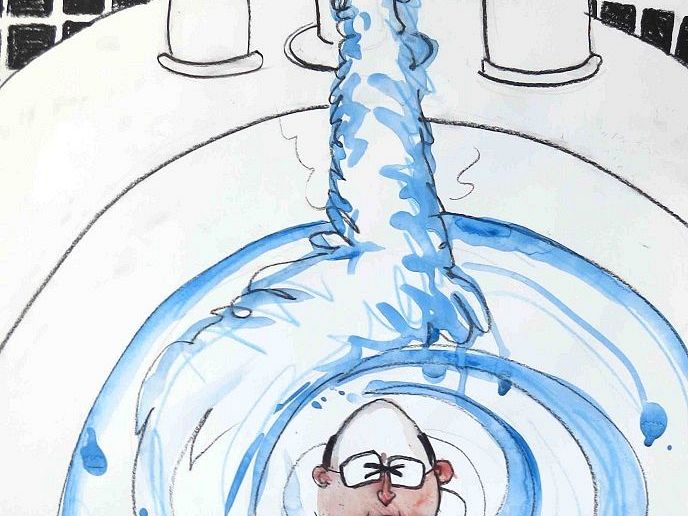 Former NSW Premier Gladys Berejiklian has had her time in the ICAC chair, denying and forgetting as much as possible in an effort to avoid the truth.

This reminds us of the time in 2014 when former Senator Arthur Sinodinos gave a similar performance under ICAC investigation, covered in this article by investigations editor Ross Jones.

ON THURSDAY 3 April 2014, the golden dreams of Senator Arthur Sinodinos were strewn to the four winds in a mist of green fairy dust — the colour of greed, jealousy and money.

Newspaper reports are one thing, the transcripts better, but witnessing the Senator’s discomfort live was discomforting in itself. Beautiful body control, calm hands, a flash of irresistible smile, perfect manners. AO badge.

(Daily Telegraph cartoonist Warren Morris, predictably, penned a cartoon of Arthur being “tapped” on the head. It was a memory/water joke.)

But it was a tic Arthur couldn’t conceal. He even ran his finger around the inside of his collar a few times. Smooth operators on their game do not do that.

ICAC is not a court. Court rules do not apply. It is an inquiry where all the players – witnesses, counsel, the Commissioner – speak into mics, the transcripts to be pored over at the Commissions’ leisure. And pored over they will be, the inconsistencies explored for possible DPP referral. When I say possible, I mean really possible. Big time.

That’s why so many witnesses had apparent memory failure. There is no law against forgetting.

Arthur’s apparent loss of his upstairs facilities has been well documented and is, by now, widely known. Several times, the audience guffawed into laughter in sheer disbelief; Arthur pressed on, sipping air and trying to beam at the Commissioner.

These things go to the heart of the Liberal-National Coalition.

Peta Credlin, whose political nose cannot be denied, made sure Sinodinos only cracked Assistant Finance Minister to Mathias Cormann even though he can smile more readily, knew John Howard and is, according to Tony Abbott, an “honourable man”.

But they knew this guy was off when they hired him.

He was hanging with Nick Di Girolamo and Paul Nicolaou, both former Liberal Party fundraisers. Everyone knew them and what they did for a quid. And who they doled out the quids to; the North Sydney Forum, a Liberal fundraising operation in Joe Hockey’s electorate, which accepted $33,000 from Australian Water Holdings (AWH) before the stench became so strong they sheepishly returned the tainted funds.

Sinodinos was hired by Abbott for the same reasons AWH hired him — as a door opener. He’d been Howard’s Cardinal Richelieu and was seen as an electoral asset in the restoration of the ancien regime.

The ordeal of Arthur will be long and mediaeval. Blackadder to Baldrick, not in one fell swoop, but exquisitely drawn out. If he was telling the truth to the commission – and let’s hope he was – then he falls a little behind the desired standard of your modern chairman, what with the diligence responsibilities and all.

So, you would think, that’s it for a serious, heavy-duty business career. Maybe a trucking company in Bargo, but Collins Street, probably not.

Politics? Hard to see with the Obeid taint. Ride out his term maybe, then bye-bye if worse hasn’t happened in the meantime.

Back in February 2013, Arthur made a mea culpa speech in the Senate for failing to disclose five – count them – directorships in what he described as an administrative oversight.

In the same speech, he claimed he had no knowledge of the Obeid’s involvement in AWH:

“I became non-executive chairman of AWH on 3 November 2010. I was not aware that, at around this time, the CEO of the company had negotiated what has been reported as a personal loan agreement with members of the Obeid family, secured against shares in Australian Water Holdings. I believe that there should have been such a disclosure made to me.”

It might have been reported as a personal loan agreement secured against shares, but in the Obeids’ accounts, it was booked as a direct loan to AWH. Moses Obeid swore blind this was a “typo”.

There’s an awful lot of information presented to ICAC and, frankly, I’m not sure where the reporting boundaries lie. But based on what’s happened so far, you’d be shocked if criminal prosecutions with meaningful gaol time didn’t follow.

Investigations editor Ross Jones is a licensed private enquiry agent and the author of ‘Ashbygate: The Plot to Destroy Australia’s Speaker‘. You can follow Ross on Twitter @RPZJones.