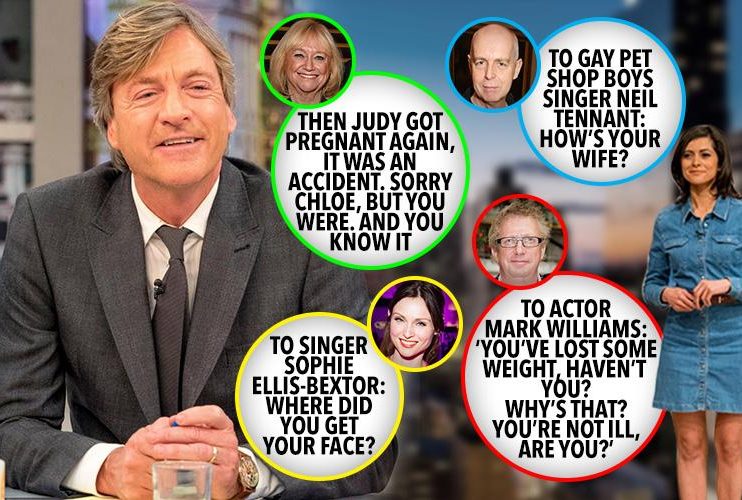 RICHARD MADELEY has been confirmed as Good Morning Britain’s new host and it seems viewers could be in for a lot of laughs if his past exploits are anything to go by.

The presenter, 65, often dubbed “the king of cringe”, has got into trouble a number of times over the decades for his dodgy dad jokes and cheeky gaffes.

Some have compared the father-of-two’s blunders to those of Steve Coogan‘s fictional character Alan Partridge.

However, others have defended the TV stalwart and feel he brings a much-needed giggle to stuffy news formats.

As Madeley gears up to join Susanna Reid as part of a reported £300,000-a-year deal, we look back at some of his best lines.

Confusing continents for countries while talking about the Covid vaccine rollout: “It’s not just loading these boxes onto planes and flying them out to countries like Africa.”

After appearing a suspicious shade of dark mahogany on GMB: “What happened was at three in the morning I put my daughter’s fake tan on, I was doing a Donald Trump.”

Reflecting on his culinary skills: “Remember that soup I made last week? Absolutely horrible, had to throw it in the garden.”

On assisted suicide: “At that point where you just need a little push to go over the edge, I wouldn’t give a twopenny f*** if there was a risk of being prosecuted.”

To John Lydon: “If we could throw a fishing rod into the corridors of time and reel you in, you’d throttle you wouldn’t you?”

After a woman remortgaged her home to save her dog’s life: “Is there a point where you just say, ‘Too expensive, the dog has to die?'”

On Gazza: “He suffers for us. He bears our pain in the most public way possible… Perhaps this has always been Paul Gasgoine’s destiny.”

“I hope when I’m reincarnated I come back black because you age better!”

After an emotional man saved by paramedics met his heroes: “Stop crying! This is supposed to make you happy.”

To Faye Tozer from Steps and Russell Watson: “I always thought both of your music was a bit c**p but this is quite good.”

“So are you telling me elephants are not born evil?!”

While discussing sinking sand: “You look at the beach and you think, ‘Ahh, pretty pretty, lovely golden sand, that’s safe.’ Not in certain parts of the country… quicksand!”

“There’s not many better things than seeing an older woman skipping!”

To GMB weathergirl Lucy Verasamy after revealing fears her dress would shrink in the rain: “I think you should pop outside at once and test it out!”

To a young child with leukaemia: “Hello baldy.”

Interviewing Keira Knightley: “Can we get Keira looking like a crack whore, she’d make a good crack whore.”

To a psychiatric patient: “So, Jane, when did you first realise you were quite clearly mad?”

Using the toilet in a  squat: “You are not filming me urinating. You can listen.”

To an  actor playing a bisexual: “Would you prefer to have sex with me or Judy?”

“When we were trying to conceive, I would douse my balls in icy water before intercourse.”

“There’s not many better things than seeing an older woman skipping.”

To squatters: “What’s your supermarket skip of choice then? I myself like Waitrose.”

“Remember when you had thrush, Judy? You had a terrible time of it.”

To a male weatherman: “My daughter fancies you, by the way.”

“Then Judy got pregnant again, it was an accident. Sorry Chloe, but you were. And  you know it.”

On another segment about quicksand: “Yes, what an awful way to die.”

To an anorexic teen: “Five stone? Wow, that’s concentration camp thin, that is.”

To cross-dressing artist Grayson Perry: “You’re just humming with sexual energy. Is it the fabric?”

To dwarves: “Do you find that people patronise you? That means that they talk down to you.”

“Women lie about sex. It doesn’t matter how many partners she says she’s had before you. She’s lying.”

To singer Sophie Ellis-Bextor: “Where did you get your face?”

On listening to a recording of a viewer snoring: “Don’t worry, we’ve got much funnier ones.”

To ex-President Bill Clinton: “I was in a similar position. I was accused of shoplifting. Unlike you, I knew I was innocent.”

On Viagra: “It makes everything last much longer and return, you know, swiftly.”

To a guest struggling to control a stutter: “You looked as if your head was going to come off.”

To mindreader Derren Brown: “Can we have petroleum   and a rope? We are   burning you at the end of the show.”

To a novelist: “If you were going to write an autobiography, who would it be about?”