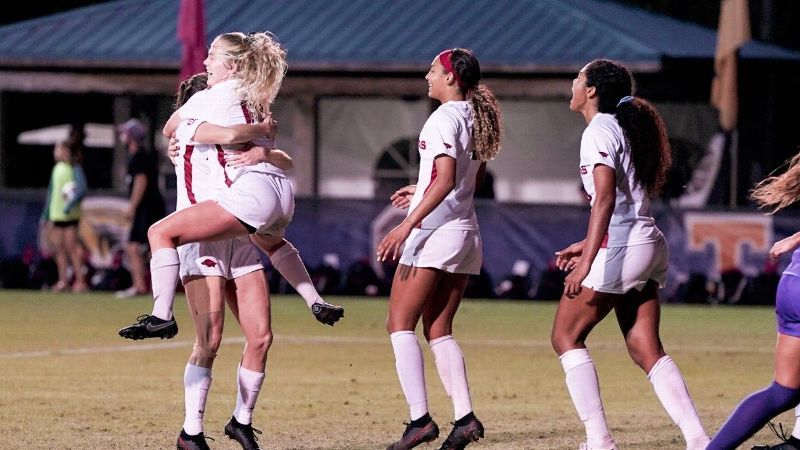 ORANGE BEACH, Ala. – Top-seeded Arkansas (15-3) opened postseason play with a victory over ninth-seeded LSU, 2-1, in the SEC Tournament quarterfinals. Forward Anna Podojil provided the offense, recording her third brace of the season.

It took 18 minutes for the Razorbacks to get on the board. Defender Haley VanFossen flipped the field after a free kick near the Arkansas penalty box, finding Reagan Swindall for a header to senior Parker Goins. Goins flicked it to Podojil, where the first teamer created space inside the 18-yard box, beating the LSU goalkeeper Mollee Swift for her 12th score of the season.

The Razorbacks outshot the Tigers 8-3 in the first half.

The Hogs struck again in the 61st minute. Goins took a corner kick from the far side that met the head of Swindall, where she sent it on frame. Podojil found it near the goal line and knocked it in off her ankle, between the legs of the Swift.

The opponents got on the board after a goal from defender Shannon Cooke with 40 seconds remaining in the match.

The Hogs SEC Tournament record improved to 15-12-2 and they have taken six of the last eight matches against LSU.

Hear It From Coach Hale

“Credit to LSU. Every match in the conference tournament is a battle. They have some dangerous players and I thought we defended much better today. We probably could’ve scored a few more goals but we are pleased with the win.”

The Razorbacks will face the winner of Auburn in the semifinals, set for Thursday, Nov. 4 at 5 p.m. CT on the SEC Network.