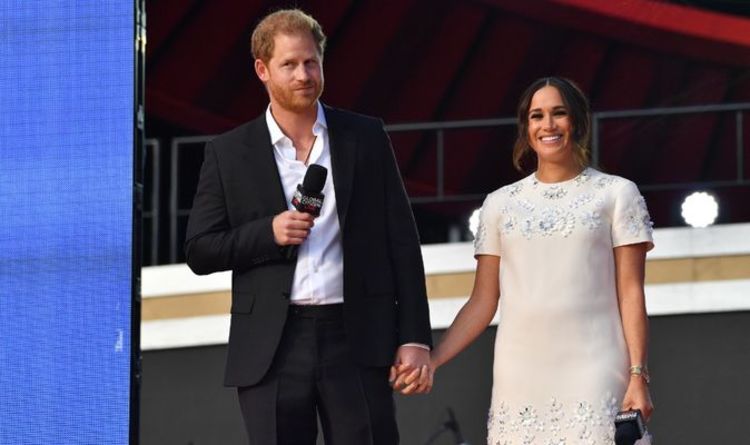 Royal commentator Richard Fitzwilliams told Express.co.uk that the couple’s pledge to reach net zero, announced earlier this week on the Archewell Website, is “likely to receive little attention” as a result of the focus that is being placed on the senior royals. Mr Fitzwilliams told Express.co.uk: “Harry and Meghan have often spoken out on environmental matters and their statement, timed to coincide with COP26, continues this.

“They have listed some of their aims in it. However, this is likely to receive little attention.

“The Queen has participated in COP26 in a beautifully worded pre-recorded video, Prince Charles has made an important speech and Prince William has just launched the Earthshot Prize and his and Catherine’s attendance at various events in Glasgow is obviously of very considerable significance.”

This comes after Harry and Meghan made a statement pledging to reach Net Zero by 2030.

However, the presence of senior royals at COP26 has attracted a lot of media attention, leaving Harry and Meghan on the sidelines.

William and Charles have both given speeches at the summit, with Charles addressing delegates at the opening ceremony, calling on world leaders to approach climate change on a “war-like footing”.

He used his well-positioned speech to tell world leaders that the time to save the planet had “quite literally run out.”

Speaking about Meghan and Harry, Mr Fitzwilliam said: “If the Sussexes had actually attended, this statement would have carried more weight as there would also have been so much interest in their appearance.

“They are indeed high profile, certainly in the opinion of Time Magazine who put them on one of their recent covers, but not at the moment!”

The Duke and Duchess of Sussex were named by Time magazine as two of the world’s 100 most influential people, appearing on one of the magazine’s covers in September this year.

In reference to their new environmental goals, a statement published on the Archewell foundation’s website said: “As global leaders convene for COP26 to commit to solutions for our climate crisis, all of us at Archewell, led by The Duke and Duchess of Sussex, share our pledge towards a more sustainable future by becoming net zero by 2030.

“Our co-founders, Prince Harry and Meghan, The Duke and Duchess of Sussex have a long-standing commitment to the planet, both together and prior to their union, with global projects and partnerships dating back over a decade.

“While we have actively made choices to offset and balance this carbon footprint, now, with the tools provided by partner organisations, we know that we can all do better. We can be Net Zero, and this is what we pledge to do.”

By 2022, the foundation will implement a new plan which takes guidance from a number of environmental organisations, including the Greenhouse Gas Protocol – a company that helps private and public sector companies to measure their greenhouse gas emissions.

The couple said they will offset any remaining emissions by investing in high-quality carbon removal projects.

The Duke and Duchess of Sussex’s announcement came just a day after the Queen praised Prince William and Prince Charles for their environmental campaigning, but failed to mention Prince Harry.

The 95-year-old monarch said: “It is a source of great pride to me that the leading role my husband played in encouraging people to protect our fragile planet, lives on through the work of our eldest son Charles and his eldest son William.

“I could not be more proud of them.

“Indeed, I have drawn great comfort and inspiration from the relentless enthusiasm of people of all ages – especially the young – in calling for everyone to play their part.”

It aims to fund and promote innovative ways to repair the planet by awarding five, £1million prizes each year for the next ten years.