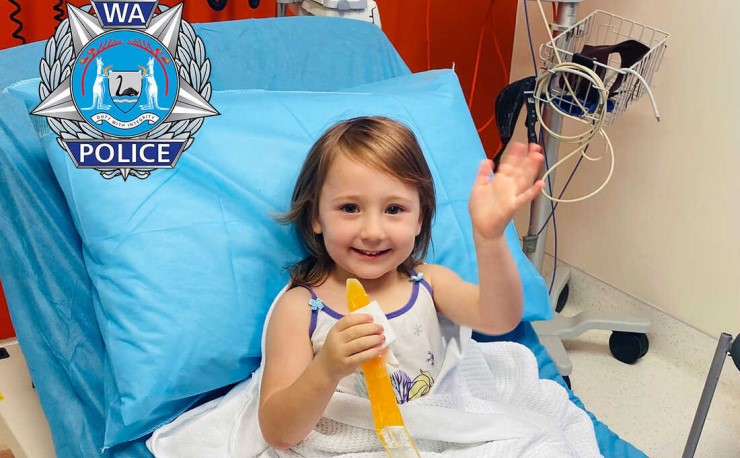 There simply isn’t a number big enough to measure the joy felt around Australia today.

You don’t know any of us, but we have been dancing merrily and honking our car horns and smiling at strangers and pointing out little girls as they skip carefree down the street.

We’ve been charging our glasses to the police officer who found you — and to your parents, who last night surely had their first restful sleep in weeks.

For 18 days, so many of us across this big nation searched for you. We looked at passing cars and in shopping malls, we looked around school pick-up zones and the playgrounds of local parks.

We knew you were special. The heartbreak that clouded your mum’s face told us that, almost three weeks ago.

We all know your mum as Ellie now. We know how she’d wrapped you up at 8pm, as snug as a bug in a rug, and put you to bed. When you woke at 1.30am, she gave you a drink of water and, no doubt, lay awake beside you until your sweet dreams lured you back to sleep.

Like mums and dads everywhere, Ellie and her partner Jake wanted you to wake up the next morning, under big, blue West Australian skies, and embrace the adventure of camping in the great Australian outdoors.

Except when they woke, you were gone. Vanished. Disappeared. Gone.

That was the morning Australia first heard your name. Cleo Smith. What a strong and lovely name, and you lived up to it yesterday when Detective Senior Sergeant Cameron Blaine asked you your name.

Your mum introduced us to you on the morning she couldn’t find you. She was paralysed, Cleo. Powerless. Panicked. For four years, you’d woken up beside her — to question her, challenge her, brighten up her world. That’s what four-year-olds do.

But on this morning, there was a big hole in her heart. You weren’t there to snugly cosy into that space, and she didn’t know what to do. Neither did we. We hoped. We feared. Then we got angry. Some people — they’re usually called trolls but I’d rather call them something much meaner — even sent nasty messages to your folks, claiming they might have known where you were.

We are so sorry for that, Cleo. So sorry that some people were so cruel and unkind to your mum and Jake.

And that’s what happened yesterday.

That’s when many of us laughed and danced and cried with joy. Early in the morning, even before the sun started lighting up the sky, phones beeped and pinged across the nation.

And when we saw that photograph of you in hospital — an ice-block in one hand, giving us the royal wave with the other, sassy and strong — we all fell even more in love with you.

We know, for your mum and Jake and your dad, that yesterday was better than winning the lottery. While we didn’t see your mum, we know that as she held you the smile wouldn’t leave her face. Your family was whole again.

In my house, it was my 20th wedding anniversary. I saw my husband read the news you’d been found, and weep with joy and relief.

We have daughters too — a bit older than you but just as precious. And knowing you had been found was a gift, the best either of us could have received.