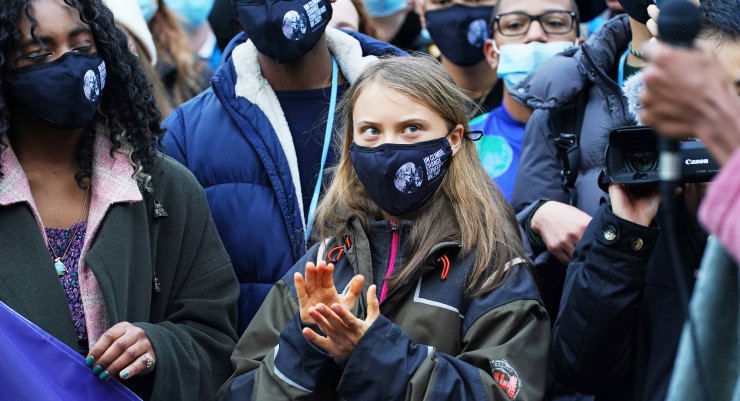 World leaders and fossil-fuel companies have come together to decide on the fate of humanity at COP26 in Glasgow. But that’s not the full story. As always, there are two sides to the conference of the parties (COP).

There’s the official side you’re meant to see: men in suits, shaking hands and posing for photo ops. Then there’s the other side: the activists who have come to disrupt the proceedings; plenty of local colour; Greta Thunberg being the only adult in the room; and the other young leaders who aren’t shying away from calling out the rank hypocrisy on display.

Thanks to social media, we now get a behind-the-scenes view of that other side of COP26. This is what it looks like.

The irony of world leaders converging on Glasgow to discuss net zero in their fuel-guzzling private jets is a bit of a theme on social media, although it’s a hypocrisy that sits quite comfortably for many — along with coffee, pens, and charging stations branded with fossil-fuel company logos.

One thing that is very hard to get past, though, is Jeff Bezos delivering a speech about his realisation (on his recent and completely unnecessary jaunt into space) of how fragile the planet actually is. Amazon’s founder has told delegates of his trip: “Looking back at Earth from up there, the atmosphere seems so thin. The world is so finite and so fragile.” He then went on to pledge $2 billion — less than half of what he blew to spend just four minutes in space — to “restoring nature and transforming food systems” affected by climate change.

US climate activist Ayisha Siddiqa pointed out the hypocrisy of the “surrogate father of modern-day capitalism” speaking at a climate conference, and how it served as a reminder that “the future of humanity is in the hands of the few”. Here’s her thread where she outlines the reality of a very disconnected COP26.

One person who is managing to connect is Greta Thunberg. While US President Joe Biden’s armoured vehicles gave him the appearance of a rockstar, the real star in Glasgow was the 18-year-old Swede, who arrived by train. Despite not being officially invited to the summit, Thunberg was mobbed by fans and photographers as she left the train station on foot. TikTok user @izazkhan7553 got footage of her moving slowly down the street protected by swathes of uniformed police officers. Someone in the background asks who it is, and someone else responds “Greta! Greta Thunberg!” (delivered in the tone of “Harry! Harry Potter!”)

Many media outlets are focusing on Thunberg’s use of adult language instead of the 1.5 million and counting signatures she and fellow young activists Vanessa Nakate, Dominika Lasota, and Mitzi Tan have gathered on their online petition calling on world leaders to face up to the reality of the climate emergency. The climate activist has been caught on film in Govan chanting “you can shove your climate crisis up your arse”, and she also gave a speech to a crowd of protestors where she said “We say no more blah-blah-blah, no more exploitation of people and nature and the planet. No more exploitation … No more whatever the fuck they are doing inside there.”

You’d think we could excuse her for getting as angry at world leaders from being wilfully blind to the destruction of the future as your uncle gets at the footy when the ref makes a bad call.

Thunberg also used her huge social media following to draw attention to the obvious greenwashing at the summit:

The climate summit is always the site of in-person protests, and this year is no different. Global environmental movement Extinction Rebellion has been causing havoc, staging a sit-down protest just yards away from where world leaders gathered, and later bringing the streets of Glasgow to a standstill:

But much of the activism this year is happening online — as travel is harder at the tail end of a pandemic, individual activists and organisations have embraced the global power of social media.

UNHCR Goodwill Ambassador Emtithal Mahmoud (scientist, slam poet and former refugee from Sudan) asked TikTok users to share their stories about why they’re worried about the climate crisis, and she started it herself by talking about how “back home, over 7,000,000 people are suffering because of intense flooding, while thousands more have been forced to flee their homes and are without access to food and water.”

Prominent US meteorologist and climate activist Eric Holthaus has handed over his Twitter account — with almost half a million followers — to youth climate activists from around the world, such as 16-year-old Alexandria Villaseñor, who has lost no time in highlighting a few things wrong with the proceedings, including Australia hosting Santos in our pavilion.

As well as the fact that none of the opening speeches brought up the idea of phasing out fossil fuels.

It wouldn’t be a globally important event in the UK if locals weren’t grumbling about the rain and the traffic. Social media is awash with images of Glasgow looking like a ghost town as police cordon off huge chunks of the city, Glaswegians grumbling about the traffic, and videos of US President Joe Biden’s monstrous motorcade of 20-plus vehicles (which apparently got flashed by a “large, naked Scottish man”).

But a feature (or bug) of the summit that has caught people’s eyes is the soaring prices for a pillow to rest your weary head after a hard day of summitting. TikTok user nick_ponty scrolls through the skyrocketing prices on booking.com to find an apartment on Wallace Street, South Glasgow for 70,000 pounds for nine nights. It does have a “superb” rating but, as he points out, it also has a red leather couch, so it’s nothing special. The last apartment to sell on Wallace Street sold for 130,000 pounds, he says — not a bad investment.