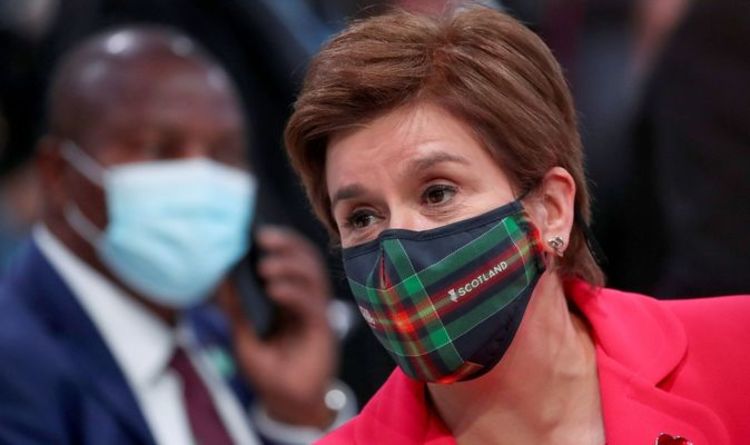 The theme of the fourth day of the UN climate change talks in Glasgow is energy. The Scottish First Minister will make the case for Scotland’s renewable energy industry at an offshore wind business breakfast.

It comes as countries will set out efforts to bring about the end of coal power with the focus on energy for Thursday’s COP26 talks.

On Wednesday, Ms Sturgeon was forced to defend Scotland’s ambitious targets to reduce emissions by 75 percent by 2030 at a COP26 event.

Chief executive of the committee of climate change Chris Stark said the Scottish Government may have “overcooked its emission reduction targets, particularly the 75 percent number” in an interview with BBC Scotland last week.

During an interview at the New York Times (NYT) climate hub at COP26 yesterday, the SNP leader was asked if Mr Stark’s comments were a “fair criticism”.

In response Ms Sturgeon admitted the targets were “ambitious” and “among the toughest in the world”.

She added: “In a context of too much under-ambition, if I am going to be criticised on the climate challenge, I’d rather be criticised on being over ambitious than under ambitious, because, even if our determination is to meet that 75 percent target by 2030, but say we only get to 70 or 72 or 73, that’s probably further than we would have got had we only set a target of a 60 percent reduction let’s say.

“I think the whole world needs to challenge itself to get to where we need to be much quicker and to go much further.

READ MORE: Nicola Sturgeon LOSES IT in interview when asked about life beyond politics

The Scottish First Minister has refused multiple times to voice opposition to the plans.

“Cambo got a licence about 20 years ago that, unlike new licences, doesn’t have to go through any climate assessment, and it absolutely should as a minimum, it can’t just be given the green light.”

She added: “Our current reality is that we are dependent on oil and gas for our energy needs.

“We need to make sure when we move away from oil and gas, that we look at renewable alternatives and that we are not just simply replacing domestic production with imported production – that would be counterproductive in the point of view of the environment.

“We also need to make sure that we are able to create new job opportunities for the 100,000 people, in Scotland, whose jobs depend on oil and gas.”