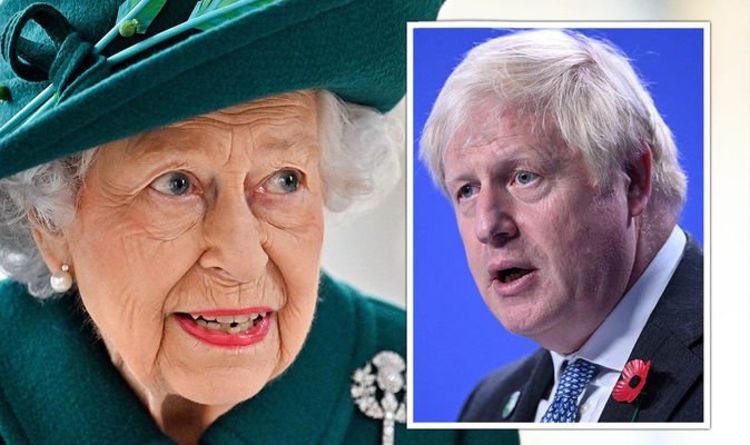 The Queen is abiding by her doctors’ advice as she continues to carry out only light duties at Windsor Castle. These include dealing with the Government’s daily red boxes and held virtual audiences.

On Wednesday, Her Majesty also held a phone call with the Prime Minister, according to the Court Circular which records every official engagement undertaken by senior royals.

The entry, with date November 3, read: “The Rt Hon Boris Johnson MP (Prime Minister and First Lord of the Treasury) had an audience of The Queen via telephone this evening.”

What is discussed during the weekly audiences between the monarch and her prime ministers is strictly confidential.

But it is likely this week Mr Johnson will have spoken to the Queen about COP26, the climate change summit currently taking place in Glasgow.

The monarch was meant to attend Monday’s evening reception at the summit alongside Prince Charles, Prince William and the Duchesses of Cornwall and Cambridge.

But last Tuesday Buckingham Palace announced she had “regretfully” taken the decision to remain at Windsor following her doctors’ advice to rest.

The Queen made up for her absence by recording a speech in which she urged decision-makers to rise above the politics of the moment and take steps to save the planet for generations to come.

Over the past two weeks the sovereign, who was taken to King Edward VII Hospital on October 20 to run “preliminary tests”, has reportedly not attended Sunday service at the All Saints Chapel near the castle.

Moreover, she hasn’t been spotted walking her dogs.

However, she lifted the spirits of royal watchers worried for her health earlier this week, when she was photographed driving herself around in her private estate.

And today it has been reported the sovereign was helicoptered to her residence in Sandringham, where she will spend her first weekend away from Windsor since October.

A royal source told the Mirror: “The Queen had been hoping she would still be able to spend the weekend at Sandringham and was delighted her doctors gave her the all-clear to travel.

“Her Majesty is very much looking forward to hosting her family at her Norfolk home for the Christmas holiday and there is much preparation to be done in time to accommodate everyone who has been invited.

“The Queen has many happy memories of being at Sandringham with the family over Christmas and was in the firm belief that she was far better off being there in person to oversee everything as much as possible.

“But she travelled on the understanding with her doctors that she continues to rest as advised.”

The publication recorded the Queen’s trip to Norfolk will be used to make plans ahead of Christmas.

The monarch started spending her Christmas holidays in Sandringham with her extended family three decades ago.

In 2020, for the first time in years, she was forced to remain at Windsor Castle in the company only of her husband Prince Philip due to the Covid restrictions in place.

However, this year she is said to be “totally committed” to host her loved ones in Norfolk as per royal tradition.

This coming Christmas will be particularly poignant for the Queen, who lost her husband aged 99 in April.

Following her short trip to Sandringham, the Queen will return to Windsor, which became her main residence with the beginning of the pandemic in March 2020, early next week.

She is expected to continue with her light duties at least until November 13, when she will miss the annual Festival of Remembrance at the Royal Albert Hall.

However, the palace said last week the Queen has firm intention to attend in person the National Service of Remembrance at the Cenotaph on Remembrance Sunday.