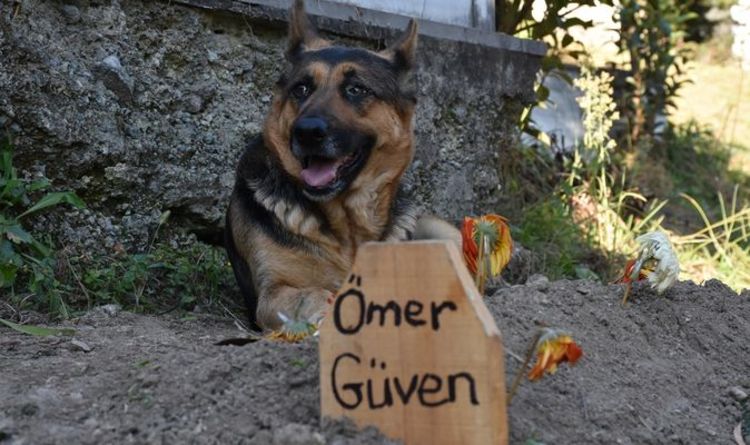 The dog Fero has refused to move from his owner Omer Guven’s grave since he died a week ago. After Omer’s wife died some 12 years ago, he moved to the district of Kaymakli in northern Turkey.

Here he began to take care of stray cats and dogs, according to the news site Olay53.

Mr Guven was widely respected and regarded as an animal lover by the people around him.

Around 11 years ago, he began taking care of a German Sheperd puppy, whom he named Fero.

Sadly, last month, Mr Guven fell ill and was taken to hospital where he passed away at the age of 92.

According to reports, Fero kept watch over the coffin until the burial the following day and has since been lying on its owner’s grave.

Witnesses have said Fero refuses to be moved and is seen rubbing his head in the soil.

“He also had an incredible love for my father.

“Fero came to the village as a stray dog.

“He adopted Fero and loved him very much.”

“Fero was devastated when he passed away.

“We even saw tears flowing from Fero’s eyes.”

This story hails back to the story of Greyfriars Bobby in Edinburgh.

The legend has it the Skye Terrier spent 14 years guarding the grave of his owner until he died in 1872.

The dog was buried just inside the gate of Greyfriars Kirkyard, in Edinburgh, not far from his owner John Gray.

According to experts, dogs who wait at their humans’ graves may be waiting at the last place they detected their humans by scent.

Some suggest they may be able to detect the scent of their humans’ bodies even after they are buried.

Stanley Coren, a psychology professor at the University of British Columbia, said dogs do not understand death is final.

He told DogTime: “I hate to say this – but in some respects, they may have it better than we do, because at least they still have that glimmer of hope.”