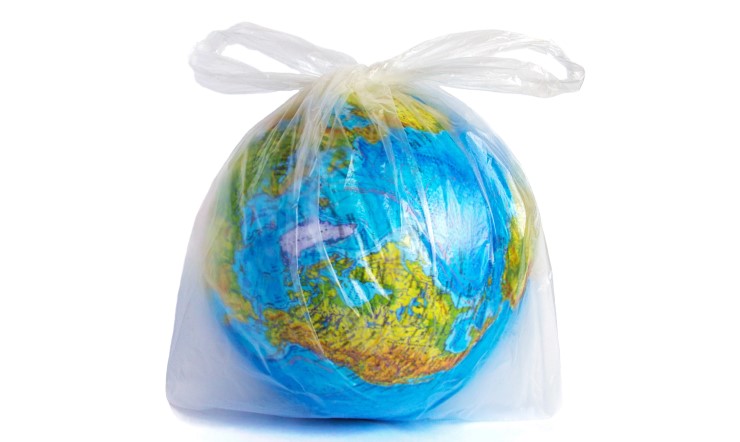 In a famous passage, the labour organiser and folk singer Utah Phillips identified our whole planet as a crime scene: “The earth is not dying, it is being killed, and those who are killing it have names and addresses.”

That’s clearest when we look at the immediate post-war era, when atmospheric carbon dioxide, ozone depletion, species extinctions, loss of forests, and other measures massively spiked.

The period — known to scientists as “the Great Acceleration” — did not come about by accident. It was imposed from above — and often against the wishes of ordinary people.

At the end of World War II, many politicians feared the United States might slip back into depression. Without the need for bombers or tanks, or for that matter military cars, what would happen to the new assembly lines?

Americans, the corporate leaders concluded, needed to use up resources more quickly so as to create the demand that kept the assembly lines rolling. Bedevilled by overproduction, they decided that, as Vance Packard quipped in The Waste Makers: “The way to end glut was to produce gluttons.”

Marketing consultant Victor Lebow stressed the importance of what he called “forced consumption”. In The Journal of Retailing, he explained that the productivity of the economy required consumption to become a way of life: “We need things consumed, burnt up, worn out, replaced, and discarded at an ever-increasing rate.”

This was the era of planned obsolescence and the fully disposable commodity, with factories creating an array of products (such as nappies, razors, and cooking utensils) designed to be used once and tossed away. Single-use items proliferated so quickly that the company Stan Pak (“Standard Packaging”) could adopt the slogan: “Tomorrow, more than ever, our life will be ‘disposable’.”

Disposability rested, in particular, on the rise of plastic, the production of which tripled in the US between 1940 and 1945.

From the very start, manufacturers recognised that given the speed at which plastic could be created, the creation of a surplus posed an obvious problem, especially since synthetic resins could take up to a thousand years to break down. Accordingly, at the 1956 conference of the Society of the Plastics Industry, a speaker urged “low cost, big volume, practicability, and expendability” on his fellows.

“Your future is in the garbage wagon,” he told them.

To rally ordinary people behind this unlikely slogan, plastics producers immediately ran a major educational campaign to sell consumers on the virtues of their new substance. Looking back from the vantage point of 1956, the editor of the trade journal Modern Plastics acknowledged that “not a single solid market for plastics in existence today was eagerly waiting for these materials”. On the contrary, each new plastic product faced “either fearsome competition from vested materials or inertia and misunderstanding in acceptance, all of which had to be overcome before plastics gained a market”.

Take the plastic bag. By 1958, makers of polyethylene film had sold a billion of the new bags, which were particularly embraced by the dry-cleaning industry. But that year and the next, a rash of newspaper reports documented the role of polyethylene in the suffocation of as many as 80 children (as well as multiple suicides of adults).

The public hostility was immense, and was reflected in the tenor of the media coverage. One reporter described plastic bags as “murderous”; the New York Journal complained that “an almost invisible peril hangs loosely over the helpless heads of the nation’s infants”; and the San Francisco News urged the nation to “ban the bags”.

Even as the Society of the Plastics Industry protested that there was no “mysterious built-in danger” to bags and that they did not “literally reach out to ensnare children”, calls for legislative action proliferated. Plastic bags were only saved by a major publicity campaign by the SPI and extensive lobbying of state and local lawmakers explicitly to prevent restrictive regulations.

“Our job was and should always be open plastics markets and keep them open,” the SPI’s lawyer said.

Crucially, infants were able to choke on the bags because people intuitively recycled them, just as they’d done with cloth or other containers in the past. In fact, the practice of reuse was initially taken for granted, even by the industry.

In 1956, for instance, The New York Times told readers how clear plastic bags should be cleaned inside and out with a few dabs of a sudsy sponge. “Dry the bag promptly, and it will stay lovely for many seasons to come,” it explained.

Du Pont might have protested that these lovely bags were actually “made and costed to be disposable”, but it took some time before ordinary people could be induced to discard them as quickly as the manufacturers wanted.

This was a general phenomenon. In the late 1950s, Modern Plastics was still bemoaning its customers’ tendency to reuse plastic drinking cups. Yet it consoled its readers that “it is only a matter of time until the public accepts the plastics cups as more convenient containers that are completely discardable”.

That promise proved utterly correct. Today, best estimates suggest that some 500 billion plastic cups get used annually — and almost none are recycled.

Similarly, plastic could replace the previously ubiquitous paper bags in American supermarkets in the 1976 only after the industry stared down the initial widespread hostility of shoppers. To facilitate the introduction of plastic, the “bag companies reached out directly to stores with educational programs to help grocers overcome shoppers’ distaste for the bags”. The common narrative about a lazy public choosing plastic with no consideration for anything else bears little relationship to historical fact.

With plastics, as with many other examples, a tiny coterie used every weapon at its disposal to cajole, coerce or persuade the rest of us to accept environmentally destructive practices we never wanted and often resisted.

We’re often fed an environmental narrative in which the public are presented as innately lazy, greedy and stupid, willing to wreck the planet in their lust for comfort.

But there’s another history — a true history — that doesn’t defame ordinary people, one in which the villain isn’t humanity per se so much as a particular set of social and political structures that didn’t exist in the past and needn’t exist in the future.

People aren’t the problem. They’re the basis for hope.

This is an edited extract from Crimes Against Nature: Capitalism and Global Heating by Jeff Sparrow (Scribe, $29.99). Out now.

Get our Lies book FREE and 50% off Crikey

You don’t need to rely on foreign leaders to call out our PM’s lies and falsehoods.

We called him out long before President Macron did.

That’s why our first ever Crikey Read, a new book written by Bernard Keane, combines our eye-opening dossier of Scott Morrison’s documented lies with Keane’s scathing take on why deceivers dominate in the new era of politics.

Get your hands on your copy for FREE and SAVE 50% on your first year of Crikey when you subscribe in the next 48 hours.