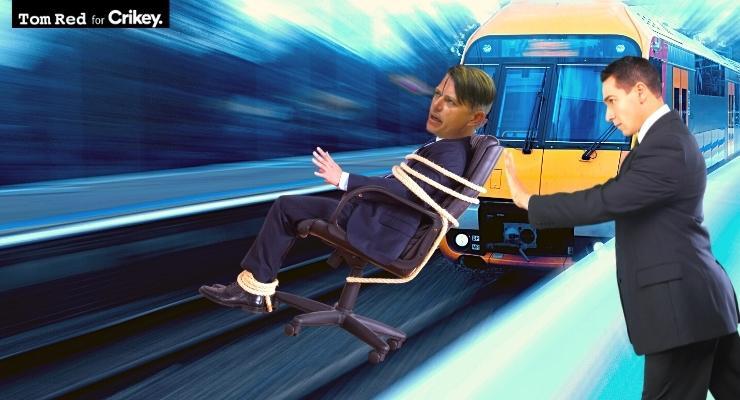 When called to give testimony to the powerful NSW public accountability committee yesterday, the former KPMG partner blew the lid on how consultants really operate — telling a client what it wants to hear, not necessarily the truth.

Lyon told the inquiry he had been pressured to subvert his independent analysis of the state’s troubled rail assets by senior members of the state government.

The bombshell claims were backed up by equally explosive emails that laid out clear interference of KPMG’s work by department officials, including Treasury secretary Michael Pratt.

Lyon said senior public servants subjected him to “professional, ongoing attacks” and Pratt had called for him to be sacked.

He said KPMG’s report was more about ensuring Treasury was told what it wanted to hear rather than the truth: “I had to choose between my own professional ethics and my partnership at KPMG.”

Lyon left KPMG in June and now runs his own consulting firm.

Lyon’s testimony is a rare insight into what happens when the public service is outsourced to private consulting firms, something that has ramped up to record levels in the past two years.

In emails, Pratt called on Lyon to “either correct the errors or remove all references to Treasury’s model”, to which Lyon responded: “I’m sick of being bullied by you. Grow up or tell the truth.” Pratt then wrote to KPMG’s senior partners saying Lyon was “out of control” and “refusing to take counsel”.

Lyon described senior public servants as a “Tahenista hit squad” (a play on the Transport Asset Holding Entity — TAHE — the body it was analysing, which controls $40 billion of NSW public rail assets) who were pressuring him and his team. He described multiple calls from senior public servants saying KPMG had gone “beyond [its] scope” and that identifying problems was not KPMG’s job.

He said giving Treasury what it wanted to hear would attract a high reputational cost for the firm.

Lyon was highly critical of KPMG partners, testifying that it was embarrassing that they “didn’t have the moral strength” to say no to a client.

Light in the darkness

An investigation by Adele Ferguson and Matt O’Sullivan in the Nine papers in June revealed how the NSW government attempted to cover up how it artificially inflated the state’s budgets by tens of billions of dollars by shifting the rail network’s costs on to a corporation (the TAHE) that hadn’t been able to properly operate six years after it was launched.

KPMG was at the time conducting two separate reports about TAHE for the government — one for Treasury and the other for Transport for NSW. In the middle of all of it, Transport for NSW secretary Rodd Staples resigned with little explanation.

Lyon’s testimony is not only important in helping expose the grubby details of the TAHE. It also comes at a time when outsourcing public sector work to consultants reaches record highs and is rightfully back in the spotlight.

Since the start of the pandemic, more than $1 billion has flowed out of the public service and into the hands of the world’s seven biggest consulting firms. It’s a trend that has seen Australia become one of the most outsourced governments in the world. But there is little transparency over what taxpayers get for their money.

Now, thanks to Lyon, there is some light in the darkness.

Get our Lies book FREE and 50% off Crikey

You don’t need to rely on foreign leaders to call out our PM’s lies and falsehoods.

We called him out long before President Macron did.

That’s why our first ever Crikey Read, a new book written by Bernard Keane, combines our eye-opening dossier of Scott Morrison’s documented lies with Keane’s scathing take on why deceivers dominate in the new era of politics.

Get your hands on your copy for FREE and SAVE 50% on your first year of Crikey when you subscribe in the next 48 hours.