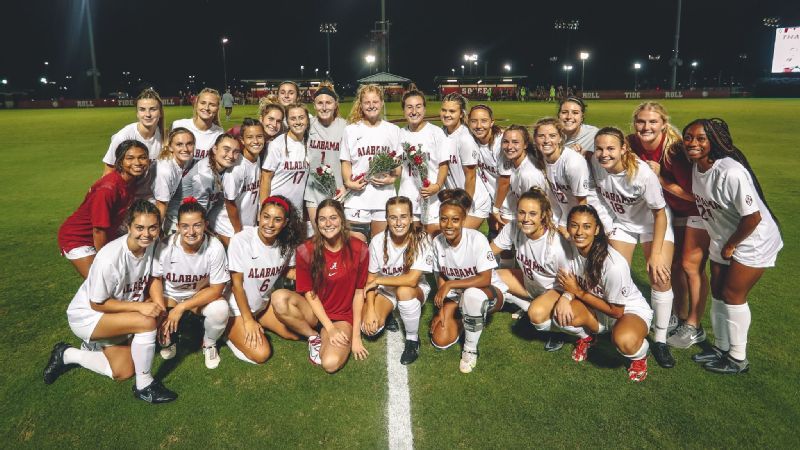 BYU jumped out to an early lead as Cameron Tucker received a through pass from Mikayla Colohan in the fourth minute of play. Colohan netted a goal of her own in the 20th minute after a foul in the box led to a penalty kick. Despite the early goals, Alabama provided pressure in the attacking third firing off six shots and tallying five corners, but was unable to find the back of the net. As the two teams prepared for halftime, BYU found a third goal from Colohan who put a pass from Addie Gardner into the bottom left corner.

Alabama found its opening in the 65th minute after the Cougars’ goalkeeper was unable to secure a shot from the left side of the box from Riley Tanner. Felicia Knox capitalized on the loose ball to send it into the lower left corner of the goal. BYU responded as Colohan scored her third goal of the game from the top of the box off a pass from Tucker in the 74th minute.

The Crimson Tide concluded one its best seasons in 20 years, which included making its first-ever appearance in the Second Round of the NCAA Tournament and recording its first NCAA win with a 1-0 victory in the first round against Clemson. During the postseason, Alabama earned a first-round bye in the SEC Tournament and earned a berth for the NCAA Tournament for the fourth time in program history. Alabama set a program record for most home wins in a single season with 10 and topped two top-25 opponents in No. 19 Auburn and No. 24 LSU. The Tide held seven team scoreless throughout the season including No. 19 Auburn, No. 24 LSU and Clemson.

“That’s a good team. Easily one of the best attacking teams we’ve seen this season. Despite the three-goal deficit at half, we felt like we were still in the game. We knew we would be able to create chances. We had a couple big ones in first half that we just missed. Loved our response in the second half. At 3-1 down, we had a great opportunity that we just put over the bar. We score that, who knows what happens.

“Overall, I’m proud of the fight and effort we showed tonight and all season long. This program took a huge step forward this season. We’ve got a great foundation to build on. Every player on the team is eligible to return next season. Plus we get Riley Mattingly back from injury and are adding some very good freshmen next fall. Should be an exciting team. I can’t wait to get started. We really appreciate the overwhelming support we’ve received from our fans this year. They’ve been awesome. Can’t thank them enough.”

BEHIND THE BOX SCORE