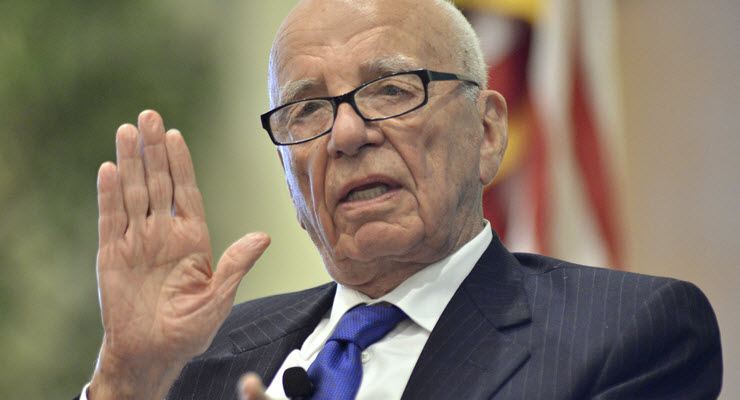 Like most old men, 90-year-old control freak Rupert Murdoch isn’t getting any more tolerant when it comes to accepting criticism or breaking old habits.

Indeed, the old master of shutting down AGM debate has been at it again over the past two weeks, pulling numerous shifties to minimise discussion, avoid questions and discourage shareholders from attending his public company meeting, let alone engage in debate.

When you consider that Murdoch men have used their voting gerrymander to vote themselves salaries and bonuses of more than $1.5 billion from public companies since 2000, you would expect proxy advisers, institutional investors and retail investors would be storming the barricades to protest these insider rip-offs.

Indeed, as this list of past protest votes and this list of hostile shareholder resolutions demonstrates, the persecuted minority shareholders have been objecting for years. But the family, which owns about 14% of News Corp and Fox Corp, continues to use its gerrymandered 40% voting stake to retain complete control and run the businesses like a family concern.

The Murdochs have got AGM minimisation down to such an art form that few people bother to turn up any more because the meetings rarely last longer than 30 minutes.

Let’s start with Fox Corp, owner of Fox News. It held its physical AGM on November 10 in Los Angeles, with no accompanying online option for its tens of thousands of retail shareholders in Australia alone.

Sure, there was a 33 minute audio webcast, which will be taken down in 90 days, but you could only listen online rather than ask questions. This broadcasting company didn’t bother to offer a video of proceedings, let alone slides to accompany the six-minute formal address by executive co-chairman and CEO Lachlan Murdoch. Rupert never said a word and presumably wasn’t even physically in the room.

The audio cast opened with what sounded like a security guard with a megaphone urging residents to get into their bomb shelters as he screeched out the rules of the meeting, including that:

Each speaker … will be recognised once, regardless of the number of shares the speaker owns or proxies he or she represents … Speakers are limited to one question which should be no longer than one minute in length … The use of cameras, recording devices and other electronic devices is prohibited at the annual meeting.

There were 12 items of business including two shareholder resolutions proposing governance improvements. US law requires that sponsors of shareholder resolutions be given a reasonable opportunity to speak to their resolution, and this is what delayed the general debate at the AGM until 26 minutes into the 33-minute meeting. The proposal to force Fox Corp to disclose its full lobbying activities was supported by a clear majority of independent shareholders as can be seen in these voting results.

As for general questions from the floor, only two Fox Corp shareholders had bothered to go through the rigmarole of attending to ask a question. Both were right-wing fans of Fox News. It remains puzzling why US progressives, Democrat voters or media competitors miss the opportunity to grill the Murdochs over Fox News year after year at the AGM.

Meanwhile, the hybrid AGM model, where shareholders can ask questions either in the room or online, is emerging as best practice in Australia — but the Murdochs are having none of that. Yesterday’s News Corp AGM, in contrast to Fox Corp’s, was 100% online. No one had the opportunity to see Rupert Murdoch in action in New York.

This time Lachlan was the silent one as Rupert delivered the first of two formal addresses which made headlines: advising Donald Trump to “move on” from rigged election claims, and taking another self-serving swing at Google and Facebook.

Yesterday I set a world record by asking a total of about 80 questions across seven online AGMs, but News Corp’s 7am (AEST) start wasn’t among them. This is because they inserted the sneaky requirement (see page 74 of the AGM proxy statement) that shareholders had to email the company before November 12 to secure a 16-digit control code to ask questions at the online meeting.

That’s our Rupert. It’s all about control.

It probably didn’t matter much that I was shut out of proceedings — last year only two of my nine submitted questions were read out anyway.

Rupert was twice as generous as Lachlan, offering News Corp shareholders each a limit of two questions over two minutes, but it was hard to gauge if the brief 10-minute Q&A session at the end of the 26 minute meeting accommodated this generosity. The shareholders lodging online questions to be read out by company executives weren’t named.

At the end of the day, public company AGMs are primarily about announcing the results of annual corporate voting processes because nothing much changes on the day. However, News Corp doesn’t even do that, preferring to only disclose proxy votes hours after the meeting had finished.

At the moment, News Corp directors can only be removed from office if a majority of all voting stock on issue supports such a move. In Australia, it would only require a majority of voted stock. And with the Murdoch family sitting on 40%, you’d think they wouldn’t bother with additional minority shareholder suppression tactics.

As for supporting free speech, open debate and fair democratic processes, don’t expect to hear any of the Sky News dancing bears point out the hypocrisy of their founding family’s AGM actions any time soon.

If they did, their microphones would be quickly turned off, just like the shareholder trying to ask a second or third brief question.