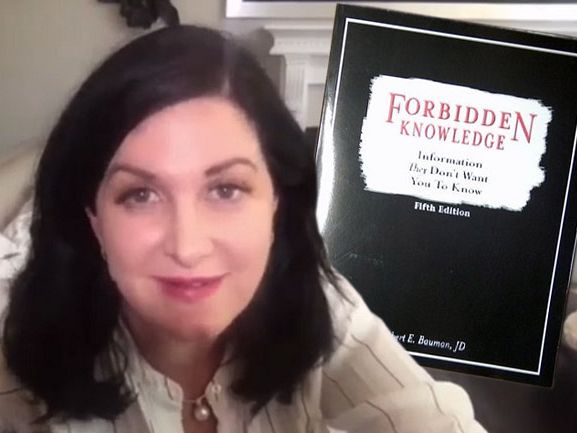 A self-help booklet written by self-professed finance and law maven Dominique Grubisa bears more than a striking resemblance to a book written in 2010. David Donovan reports on this blatant literary rip-off.

IN 2017, Dominique Grubisa produced a booklet entitled ‘Forbidden Knowledge’. It runs for some 46 pages and set out strategies to pursue freedom. Those strategies include obtaining citizenship of a second country, how to plan an emergency escape and how to hedge your bets with offshore accounts and storing wealth in tax havens.

One section is dedicated to Panama. Hang on… Panama? This is a document published in 2017. In 2016, the Panama Papers led to the Australian Tax Office investigating 800 Australians.

Where did Dominique get the inspiration for this treasure trove of knowledge?

Well, a quick Google search of the terms “Forbidden Knowledge” and “tax haven” brings up a book of that name written by former U.S. Congressman and sovereign citizenship type Robert E Bauman.

Mr Bauman was elected to the House of Representatives in a special election in August 1973. The devout Catholic married father-of-four had his political career cut short in 1980 when while running for re-election he was charged with soliciting sex from a 16-year-old male prostitute.

After politics, he became co-founder and legal counsel for the Sovereign Society, a group that referred clients to Mossack Fonseca, the law firm caught up in the Panama Papers scandal. Mossack Fonseca shut its doors in 2018 as a result of the damage inflicted by the Panama Papers leak. The partners of that firm are the subject of international arrest warrants by German prosecutors.

Dominique’s ‘Forbidden Knowledge’ is ripped straight from the pages of Mr Bauman’s book.

Dominique seems to share Bauman’s doom and gloom prognosis in Bauman’s sixth edition of the book published in 2010. She says: ‘higher taxes, inflation and economic collapse seem all but inevitable.’

Exactly what Bauman opined in 2010.

Occasionally Dominique adds a little bit of flair to the words of Bauman. Bauman did not say ‘neither Party – Labor or the Coalition – seem to have their house in order and they are all chasing their tails and bickering like a bunch of children’.

Dominique is dramatic when she rips off the words of Bauman saying:

‘Common sense dictates that you should have in place an escape plan for your family and your assets.’

Very dramatic, Dominique. No doubt there will be millions queuing at Tullamarine and Kingsford Smith airports to flee Australia to save their lives.

Bauman explains to his audience how any number of unanticipated events could make it necessary for you to leave your home country — government corruption, violence, adverse law changes.

‘In many countries, a court is the last place to expect justice!’

Dominique, a lawyer and officer of the court, goes in hard:

‘In Australia, a court is sadly the last place to expect justice.’

Bauman warns about mutual legal assistance treaties (MLATs). So does Dominique. What are they? Bilateral agreements between countries for the purpose of gathering and exchanging information to enforce criminal and other laws.

Bauman warns that according to an article in Forbes magazine in 1997, there are over 3,000 federal crimes in the U.S. including 1,700 that cover minor or regulatory matters.

Of course, Dominique translates that into:

‘In Australia, according to one report, there are well over 3,000 federal crimes, including 1,700 which cover minor or regulatory matters.’

Bauman tells his readers: ‘at least for now, for safety’s sake, you or some part of your wealth need to escape from America’ to protect yourself against a weakening American banking system. Dominique follows suit advising their clients they or some of their wealth need to escape from Australia. Setting up an offshore bank account can provide peace of mind against a weakening American (I mean Australian) banking system to Dominique.

The document contains some very dodgy advice that will no doubt be of concern to the ATO and other regulators.

Bauman advised purchasing an offshore variable annuity. He says this is one of the easiest routes to investing in foreign funds without having to pay immediate U.S. taxes.   Dominique is quick to advise her clients to do the same, claiming you won’t have to pay immediate Australian taxes.

Dominique says if you go bankrupt in Australia, they will seize your passport. She claims you are effectively under “house arrest”. She says they have the right to do this as you are a citizen of Australia and they control your movements in that respect. But they have, she claims, no power to control you in your capacity as a passport holder of another country.

Those who are sucked into the nonsense spruiked by Dominique are given the details of a few reliable contacts to help them with their offshore journey. Again, this is ripped straight out of Bauman’s book. Except unlike Bauman, Dominique provides only one supposedly reliable contact — a Jack W Flader of Hong Kong. Mr Flader is one of Mr Bauman’s trusted contacts mentioned in his book.

Who is Mr Flader? Perhaps Dominique should have done a Google search before copying and pasting his details into the document she plagiarised from Bauman.

Jack Flader was involved in the collapse of Trio Capital, described as the largest superannuation fraud in Australian history. A matter that became the subject of an Australian Senate Inquiry in 2012.

In its report, the Committee noted:

‘The key figures responsible for the Trio collapse appear to have escaped any criminal or other sanctions. The evidence suggests that the “mastermind” was Mr Jack Flader, an American citizen, at one stage resident in Hong Kong and believed to live in Thailand. The Committee heard evidence that he has a history of involvement with securities fraud.’

The Committee also noted that, in total, $123 million in Australian superannuation funds had not been able to be redeemed from Mr Flader’s offshore funds and that in 2011 it was reported that Mr Flader sold his business, Global Consultants and Services Limited, to two Liechtenstein businessmen.

It was Mr Flader and Global Consultants and Services Limited that Dominique was promoting in her 2017 book given to clients. Mr Flader was long gone by then.

If you want to plagiarise, it’s still worth doing the occasional Google search.

As with all things related to Grubisa, buyer beware!