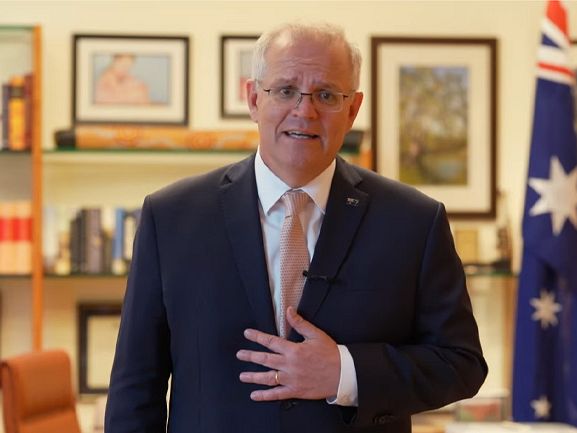 I NEVER RAN for school captain. Much to the malign of family and teachers, the idea never appealed to me. I do remember, however, on a spring day in 2018, crammed into the cornucopia of sweat, cheap perfume and poorly masked cigarette smoke which was our performing arts complex, watching on as my peers put their cases forward to represent the interests of our cohort.

For an hour and a half, I heard my classmates and some close friends recycling the same tried and true speech structure, quoting Mandela, Obama and the Dalai Lama and making promises they knew they couldn’t fulfil.

Much like a secondary school captain speech, Prime Minister Scott Morrison presents himself to an audience of onlookers, all of which are implicated in the issues he presents. This auditorium of public opinion, however, carries higher stakes and a catastrophic future for Australians and the planet if not addressed appropriately.

It’s a shame the Australian PM never ran for school captain at Sydney Boys College. Based on his presentation at COP26, he would’ve performed favourably in the polls at any high school election.

You see, Scotty is the cool, calm and collected one. Never shy of a joke and if his support of his beloved Cronulla and Australian Cricket Team is any indication, he’s always in touch with the common man. Scotty is the brave figure of reassurance Australia needs in uncertain times. Vote 1.

Instead of promising cheaper Traveller pies and real soft drinks at the school canteen, Scotty’s job is to provide Australia with vaccines and an adequate response to an unprecedented global pandemic.

Instead of encouraging school spirit at sports days, Scotty’s job is to ensure that Australia remains a reputable and trustworthy ally to our trade partners.

And instead of planning the school formal, Scotty’s job is to develop and present a coherent and efficient climate policy to prevent a catastrophic future for his grandchildren.

In Glasgow, Scott Morrison had an opportunity to set himself aside from previous Australian leaders – or previous school captains – with a coherent, appropriately researched and all-around efficient climate action plan. An opportunity for his “Australian way” to provide direction for climate action in the developing world and amend the failures of his predecessors.

Instead, similar to the public speaking competition of high school elections, Morrison’s address at Glasgow was a well-constructed and presented ramble of inadequate promises, fact-twisting and blame-shifting.

COP26 was a culmination of indolent and lacklustre climate policy at a federal level in Australia, for as long as the climate crisis has developed. The 2008 Garnaut Climate Change Review – put before the Federal Government as a landmark report – anticipated the 2020 bushfire crisis as the finale of decades of damaging climate change. Billions of dollars and dozens of lives were lost. Homes and livelihoods were destroyed. And all that this reassuring presence could offer was forced handshakes and holiday photos.

Regardless of his underwhelming response to Australia’s worst bushfire season on record, Morrison’s actions regarding climate during his tenure are nothing short of laughable. To name but a few; flaunting a piece of coal in Parliament like he’d uncovered the Holy Grail, funding and continuing to consider funding gas and fossil fuel projects as recently as the week of COP26 and confabulating a public narrative surrounding the country’s 2020 Kyoto targets.

As a sweeping statement, Morrison’s climate policy performance is an impeccable display of school captain qualities. He’s spoken well, shook hands with the world’s leaders on climate action and is consistently a model student always in touch with the common man.

Unfortunately for Scott, his performance as Prime Minister of a developed nation has been deplorable. With an election fast approaching and the lethargic response to the COVID-19 pandemic now in the rear-vision mirror, Morrison’s climate policy will be increasingly under the microscope and no amount of tuckshop discounts can reverse the damage.

Sam Leckie is a keen follower of sports, politics and economics. He is currently in his second year of an undergraduate degree in Journalism at the University of Queensland, majoring in Political Science and Peace and Conflict Studies.