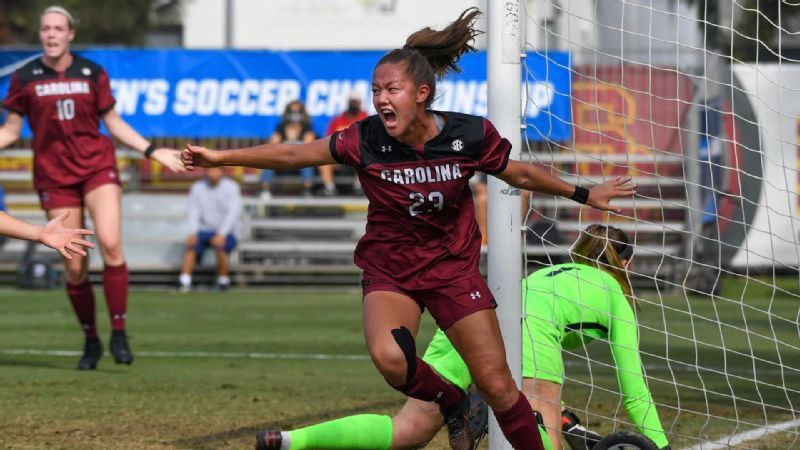 “It’s always wonderful to win at this stage of the game,” head coach Shelley Smith said. “We’re thrilled and I’m so happy for this team, especially this senior group. To keep the shutout, I’m really proud of our team. They put the goals in we needed to win the game and finish it off.”

Samantha Chang had a career day, as she contributed to all three goals, being credited with a goal and two assists. Her four points are a career-high and her two assists are also a career-high. The Gamecock defense held the Hofstra offense scoreless, after they entered the match the 21st ranked offense in the country. The South Carolina offense was also rolling as the three goals were the most allowed by the Hofstra defense, which came into the contest second in the nation in shutouts and third in goals against average.

After an early shot on goal in the second minute by Hofstra, the Gamecock defense was able to hold the Pride without a shot on goal through the rest of the first half.

South Carolina put home the only goal it would need in the 22nd minute. A free kick by Lauren Chang found its way into the box. Catherine Barry put her head on it and Samantha Chang finished it off from close range. It was Sam Chang’s second goal of the season, Lauren Chang’s 10th assist, and Barry’s third.

“I think the goal was really important for us to get ahead early,” Chang said of her goal. “It was a textbook play for us. When I saw Cat headed the ball back across, no one was marking me, so I just had an easy tap in.”

Holding the lead at halftime, Hofstra came out attacking as they attempted nine shots in the first 20 minutes of the second half. The Gamecock defense held strong as goalkeeper Heather Hinz recorded three saves during that stretch.

In the 77th minute, Barry looked to score on a breakaway, but Hofstra’s Krista Gostinello grabbed her jersey and pulled her down, receiving a yellow card in the process. The foul fueled Barry as she promptly scored her eighth goal of the season, crossing up her defender inside the box off a pass from Sam Chang.

The Gamecocks cemented the victory in the 87th minute. Sam Chang played a long ball down the middle of the field and found Ryan Gareis on a breakaway. Gareis out-ran her defender to the ball and beat the Hofstra keeper with a shot just under the crossbar. The goal was Gareis’ fourth of the season.

Hinz earned her sixth shutout of the season as she finished with a career-high six saves.