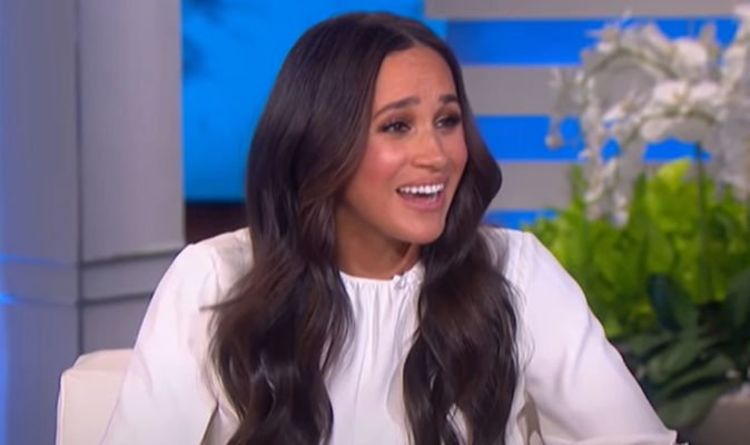 During the interview with the US TV host, Meghan, 40, recanted her children’s charming Halloween outfits this year. While Archie, two, dressed as a dinosaur, Meghan happily told the audience her daughter, Lilli, five months, chose to be a skunk. Although Meghan told the host of her two children, royal commentator Camilla Tominey questioned why there was no mention of Harry during the anecdote.

Writing for The Daily Telegraph, she wrote: “Now it was Meghan’s turn to tug on the audience’s emotions by telling touching tales about Archie dressing up as a dinosaur for Hallowe’en and ‘Lili’ as a skunk ‘like Flower from Bambi.’

“There was sadly no mention of what fancy dress aficionado Harry wore or indeed the whereabouts of the Windsor One, who was last spotted juggling in the background of another one of Meghan’s A-list speed dates with Melissa McCarthy.”

During the interview, Meghan revealed her youngest child had now begun to teeth.

Speaking to DeGeneres, Meghan begged for anything to help relieve the teething of her second child.

The US TV host then suggested using tequila, to which Meghan replied: “That’s Auntie Ellen for you.”

She also revealed how her son loves being a big brother to his sibling.

Meghan also added how she and Prince Harry, 37, love having two children.

She also revealed the difference between having one child and two.

JUST IN: Royal Family LIVE: Meghan and Harry set to miss out on happy reunion

While the pair are preparing for their second Thanksgiving in the US, it is unclear whether the pair will return to the UK over the Christmas period.

The Queen, 95, is yet to meet her latest great-grandchild.

Speaking on the Royally Obsessed podcast, Rachel Bowie said: “I’ve seen some early reports about a Sandringham Christmas this year, I think Hello! had that story.

“Whether it’s true or not, there’s conversations about the family being together, who that includes I have no idea, there were no details but that the Queen would like to host it at Sandringham.”

Her co-host Roberta Fiorito continued: “I am holding out that Harry and Meghan and Archie and Lilibet will be there, I think it’s time for them to introduce Lilibet to her great-grandmother.