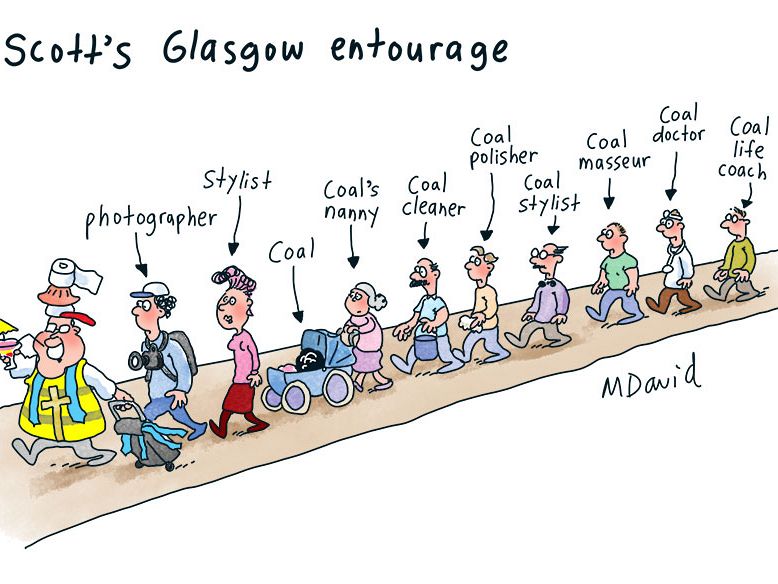 The Morrison Government is fobbing us off with a tissue of lies, a wink, a nudge and a glossy pamphlet, writes managing editor Michelle Pini.

IF THE PLAN is to do nothing and look both idiotic and criminally negligent on the world stage while doing it, then the Morrison Government’s latest climate policy plan, which is optimistically being referred to as “The Plan”, is the most successful document conceived by this Government so far.

If the plan is to accept millions in secret donations while creating an administrative and communication fortress that no member of the public can penetrate, then the members of this Federal Government and the public servants employed to assist them have excelled.

And if the plan is to stay in power at any and all costs, accepting vast sums of money from undisclosed sources and making secret deals, even if the mechanisms of democracy are destroyed, then the Morrison Government should be congratulated.

Recent events combined to form yet another stellar episode in procrastination and hyperbole from what must surely be the most incompetent Government ever to hold power in this country — and we’ve had some doozies.

First, former Attorney-General, then Industry Minister and now backbencher Christian Porter refused to disclose details of the so-called “blind” trust that gifted him (approximately) $1 million in exchange for as yet unknown agreements/services. The money was ostensibly used to fund his personal legal action against the public broadcaster for revealing information pertaining to historical rape allegations against him.

This resulted in Porter’s resignation from the Cabinet, but not from Parliament — a hitherto unheard-of outcome for a member of parliament following the acceptance of political donations, particularly for such a large amount from undisclosed benefactors.

Then we had the Government voting down the establishment of an inquiry into this magical incarnation of said funds — once again, an unheard-of outcome, until now.

This was followed by the PM’s deputy secretary – or more accurately, someone meant to be a non-partisan and impartial servant of the people – Stephanie Foster “winking” at Finance Minister Simon Birmingham and company during Senate Estimates, as if it’s all just a bit of fun. The now-famous wink was captured on camera while Ms Foster was being questioned about Porter’s anonymous donations and the timeline of internal discussions regarding whether or not these complied with parliamentary standards.

Hopefully, Ms Foster has sought medical advice to establish if her “involuntary” tic was caused by some underlying and hitherto unknown condition — or hair in her eye … or an unconscious greeting at a friend … or a reflex.

Winks that make you go hmmm… while Scott Morrison’s deputy secretary was answering questions about the secret $1 million donation to Christian Porter for his legal fees. pic.twitter.com/aTaOpHGNu0

And then we had Australia’s chief coal cheer squad – whose members also moonlight as National Party MPs – holding our democracy hostage over emissions targets. The siege took place in the Nationals’ party room where, no doubt, deep and intense discussions ensued.

The “We represent farmers” slogan failed to disguise the party’s ignorance and ill-informed babble, however, as the party’s homage to recycling, Nationals’ Leader and Deputy PM Barnaby Joyce, insisted that the Nats would not be rushed into a decision on climate policy and:

“…zealots from both sides really just need to bugger off.”

After all, it’s barely over 100 years since climate change was first discovered in 1896. We’ve only had global scientific consensus on the fact of global warming since the 1980s — 40 odd years. And the Coalition have only been in power since 2013 — a mere eight years of inaction! What’s the rush?

And so heavy thinkers and famous climate deniers comprising Joyce, Matt Canavan, David Littleproud and co drew out their 15 minutes of infamy on the world stage as long as humanly possible, making us the butt of jokes the world over.

Nonetheless, a “deal” between the factions that make up the Nationals part of the Coalition was reached.

And Joyce – the man who said “Australia committing to net-zero by 2050 would make no difference whatsoever” –  emerged from the hostage deliberations looking suitably pleased that his party, the one that managed 5.4 per cent of the vote at the last election, was able to extort whatever it is it managed to extort.

These secret demands to which we are not privy, apparently allowed the Nats to arrive at a “consensus” with the factions of the Liberal Party part of the Coalition — that’s the part led by Morrison, the man whose parliamentary coal-waving antics are still ridiculed by everyone, everywhere.

The details of this “consensus” are secret and sealed, of course, probably until 2050, or until the world ends, whichever comes first.

And so ‘The Plan to Deliver Net Zero: The Australian Way’ (The Plan) was born — printed in the form of an underwhelming pamphlet. The pamphlet contains vague intentions and the repetition of ‘existing policies‘, and offers no actual plan or commitment for action on climate change, or even the modelling on which the pamphlet was based. Democracy at work!

As if to confirm our fears that The Plan is, in fact, a collection of small ideas put together by small minds, even the pamphlet in which the supposed climate action plan is contained appears smaller (note below image) than the climate policy document released by the Abbott Government back in 2013.

Nonetheless, this is the document our Prime Minister will take to Glasgow.

Finally, the Morrison Government set about trolling us with The Plan, mentioning it more than 100 times during the press conference at which it was unveiled.

While we may never know this Government’s many well-kept secrets, one thing is certain: the Morrison Government clearly believes we can be fobbed off with a tissue of lies, a wink, a nudge and a glossy pamphlet.

The modelling of the federal government’s plan to reach net zero by 2050 hasn’t been released. @AngusTaylorMP says there’s no secrecy around the modelling. But cannot confirm when it will be released.

“The detail of the modelling will be released at an appropriate time.” pic.twitter.com/51UBh37Y9S

“Enough is enough, something has gone wrong with this Government. I’d say that it’s time for this Government to go.” Former Counsel Assisting the NSW ICAC Geoffrey Watson SC on the Christian Porter scandal. pic.twitter.com/MJdSq91hr7