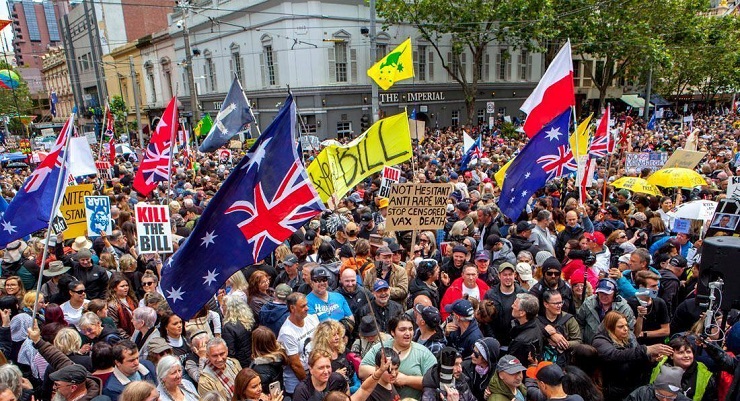 Please note: this post includes interactive elements that work on desktop, not mobile.

People around the world are growing increasingly frustrated with government pandemic powers, limited economic support and ongoing restrictions. Protests over COVID-19 are nothing new — and as recent cases in Melbourne and Europe show, they have not slowed with the ease of lockdowns. In fact, quite the contrary.

Crikey has collated some of the most-attended protests throughout the pandemic to show how spurts of dissent have erupted at different times across the globe. Of course, many occurred in countries where citizens have the right to protest — or where a free press means data on protests are publicly available.

Back to the start: Protests erupt as governments struggle to respond

To say the world wasn’t prepared for COVID-19 — and didn’t understand it — in early 2020 is a massive understatement.

A global shutdown began around March last year. In some regions like NSW, it lasted weeks; others experienced months of lockdowns. Some countries avoided harsh restrictions altogether — much to their detriment, like Sweden — while some bounced in and out of lockdown, like Melbourne.

Almost immediately, dissent began. Many governments hadn’t prepared or didn’t have the resources to help citizens survive once the economy ground to a standstill. Tensions had been high across Latin America due to high inflation and food shortages, with major protests taking place in Chile and Brazil in March, as well as the Philippines.

The US led many of the protests. In April, an estimated 20,000 people protested in Michigan by parking their cars on major roads around the State Capitol building, causing an eight-hour gridlock and causing staffing issues at the nearby hospital.

In Brasilia, Brazil, protesters camped in front of army headquarters demanding a military intervention into the government’s pandemic response, while in Paris riots took place, with many in poorer neighbourhoods arguing their cramped living conditions meant they couldn’t live safely.

Global leaders began discussing how long economies could survive lockdown. In May, officials in the UK and Italy warned the world shouldn’t wait for a vaccine to reopen. Italy, which at the start of the pandemic had been one of the worst-affected countries, allowed restaurants, bars, shops and churches to open.

Australia soon followed suit, with restrictions wound back. As much of the northern hemisphere entered spring and summer, COVID-19 cases around the world started to drop.

Outbreaks continued to bubble along across mid-2020 and into early 2021. Residents in Thailand, the Philippines, Belarus, Argentina and Germany protested against new policies across June and July that gave governments too many powers, lockdown and face mask mandates, political corruption and the economic fallout.

In Africa, a food crisis impacted millions. Protests erupted in Kariobangi, Kenya after the government destroyed 7000 homes and a market to curb the spread of the virus, with others told they would have to pay what was essentially a ransom to leave hotel quarantine.

After 112 days in lockdown, Melburnians took to the streets in September. National coordination saw protests erupt across Germany and other parts of Europe and again in Melbourne in November, ramping up at the start of 2021 as new restrictions were implemented after Christmas travel saw a surge of COVID-19 cases. By February, nationwide protests erupted across Australia, with many protesting against Australia’s vaccination rollout.

Many world leaders conceded that Delta was different — while some regions, such as the US and UK were well into their vaccination rollouts, coverage wasn’t high enough to stop a surge of cases.

In July 2021, a wave of protests once again emerged, with residents taking to the streets in Malaysia, Australia, the UK, US and Canada. In France, many of the protests were against vaccine mandates and COVID-19 certificates with up to 250,000 people protesting across over 200 locations in August.

These protests have continued through to November: fatigued with curfews, lockdowns and restrictions, and the promise vaccines would end the pandemic, high case numbers in the Netherlands, UK, France and Germany have seen riots erupt.

Australians too have voiced concerns about state pandemic bills. Victoria is debating a new pandemic bill that would replace the current state of emergency powers. This has seen a wave of protests in Melbourne and violent threats to government officials. But the protesters don’t have a unified motive: some are against vaccines altogether, others are members of violent, extremist groups and others are simply fighting for “freedom”.

While the pandemic appears to be dissipating in some regions, without a global booster program — or even adequate first and second doses in many nations — protests are likely to continue.