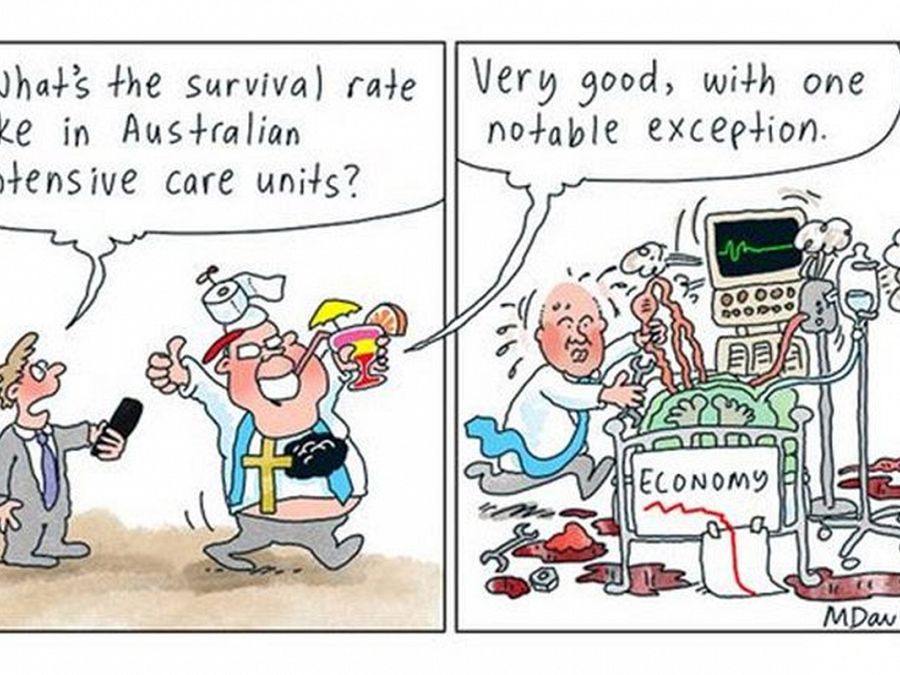 Scott Morrison’s latest scare campaign claims interest rates and inflation will be worse under Labor than the Coalition, but the historical data refutes that, writes Alan Austin.

THROUGH THE LAST financial year, Australia’s inflation was among the worst in the Organisation for Economic Cooperation and Development (OECD). Of those 38 developed countries, Australia’s 3.85% inflation hike ranked 31st. The only economies with higher inflation rates were Iceland, Poland, Hungary, the United States, Mexico and Turkey.

Australia’s history with inflation exposes Morrison’s claims of disaster under Labor as nonsense. Labor’s record is much better than the Coalition’s.

Under Labor, Australia led the world

The World Bank helps us here with inflation records for all developed countries going back to the early 1970s.

From 1971 to 1990, Australia’s inflation rate fluctuated wildly. But that happened everywhere. Inflation reached 15.4% in 1974, which helped sink the Whitlam Labor Government. But the OECD average that year was 32%. Australia’s economy under Gough Whitlam was actually one of the world’s more successful.

Australia’s OECD ranking on inflation remained pretty much in the middle – between 13th and 21st – for most of the period 1971 to 1990.

Then came the radical restructure during the Hawke years driven by reformist Treasurer Paul Keating. The World Bank’s data validates Keating’s 1991 claim that he had “snapped the stick of inflation”. By 1991, Australia’s inflation rate had fallen to 3.2%, which ranked fifth lowest in the OECD. The next year it was just 1.01%, which was the developed world’s lowest.

The Coalition lags behind Labor badly

Examining global rankings through the last 40 years shows Coalition outcomes are consistently worse than Labor’s. A simple exercise is to observe the average ranking in the OECD throughout that period. This takes into account prevailing global conditions, which varied greatly.

Australia’s inflation rankings rose steadily through the Hawke period, which saw improvements in all economic outcomes as Keating’s reforms took effect. The best inflation outcomes by far were in the Keating years, when Australia was in the top ten countries by low inflation four times, including 1992 when it was lowest. Next best were the Rudd and Gillard Labor governments, which most independent commentators accept delivered the world’s best economic responses to the Global Financial Crisis.

Next best – or second-worst – were the Howard years, where inflation remained low worldwide, with deflation appearing in Japan and Sweden. In 1997, Australia again had the OECD’s lowest inflation rate, and in 1998 was fourth lowest, confirming the stick stayed broken for quite a while.

Things deteriorated thereafter, however, and most of Howard’s last eight years saw Australia languishing outside the OECD’s best 20.

Poorest rankings for inflation historically, by far, have been through the Coalition years since 2013, with the financial year just ended the worst on record. Ranking 31st is the lowest ever. Fortunately, inflation improved slightly in the September quarter, but not by much.

This adds to the long list of recent economic outcomes which have been worst ever or worst for a very long time.These include, but are not limited to:

The role of the press to distort and deceive

The Australian mainstream media routinely falsifies economic outcomes to reinforce the perception that the Coalition is better at economic management than Labor. They have done this over the years with inflation.

The website mediacloud.org enables us to track media coverage of topical issues. The chart, below, shows inflation was seldom mentioned by Australia’s national media before 2006, when an earlier scare campaign against a resurgent Labor Party began. Coverage of inflation – primarily asserting that it would escalate destructively under Labor – increased as the 2007 Election approached and continued throughout the Labor period, despite inflation being lower under Rudd and Gillard than under Howard. As soon as the Coalition was returned to its rightful place in government, the media lost interest.

Given the mainstream media’s constant distortions, it is no wonder the latest Resolve poll shows the Coalition leading Labor on better economic management 45% to 23%. But with the rise of the alternative online media correcting the record, is this now starting to shift?

Alan Austin’s defamation matter is nearly over. You can read the latest update here and support the crowd-funding here. Alan Austin is an Independent Australia columnist and freelance journalist. You can follow him on Twitter @alanaustin001.