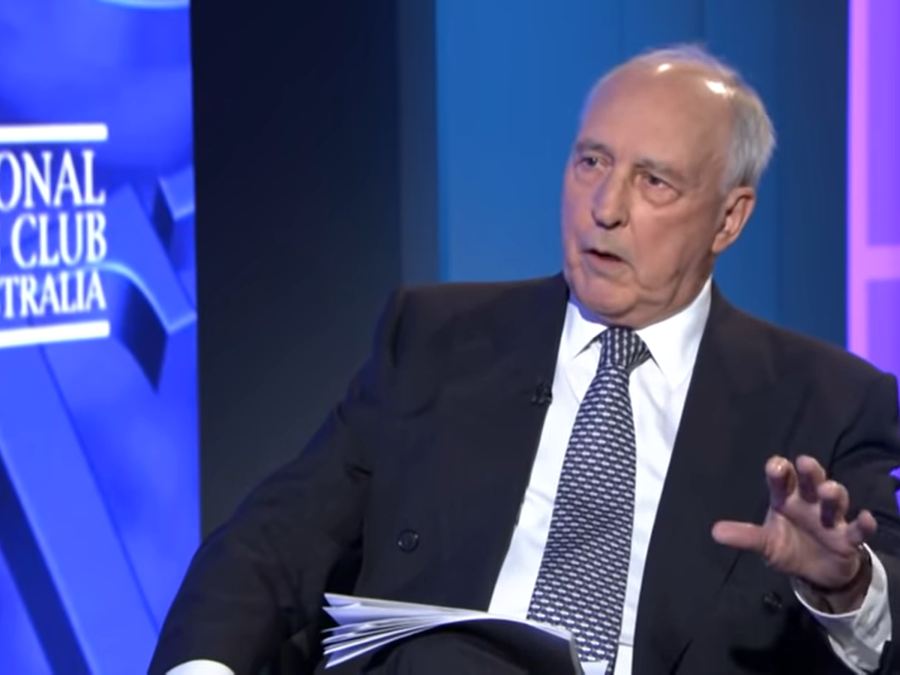 Paul Keating’s appearance at the National Press Club after a 26-year absence demonstrates one thing, at least: that each new prime minister of Australia is worse than the previous one.

Keating is streets ahead of Morrison. Keating correctly points out that Australia cannot go to war with China over Taiwan. It certainly cannot go into battle with the Chinese navy using American attack class nuclear submarines designed in Virginia in the 1990s. Keating should know: as PM, he had his own disaster with the Collins class submarines. The Collins submarines hardly ever left the docks and did not have sufficient trained personnel to put the entire fleet to sea at the same time.

Despite Keating’s attempt to dispel the confusion over China, the Australian media chose to attack him. The Sydney Morning Herald, The Age and even the ABC’s Q&A program hosted by Stan Grant. This is not helpful when there are ministers like Peter Dutton in government saying things like “it would be inconceivable that Australia as an U.S. alliance partner, would not join in military action”.

This is what Keating had to say about the United States’ attempt at coercion of China:

The United States says, well, that’s all very interesting. ‘But look, if you behave yourself, you Chinese. You can be a stakeholder in our system’.

And look, you wouldn’t have to be Xi Jinping [President of the People’s Republic of China] or anybody, to take the view of your Chinese Nationalist say, ‘Well, hang on, let me get this right. We are already one and a quarter times bigger than you will soon be twice as big as you and we may be two and a half times as big as you. But we can be a stakeholder in your system, is that it?’

And Keating is right to criticise the Government’s hypocrisy over Kashmir. Australian governments would rather sell coal and tertiary education to India than criticise that Government’s appalling human rights record in the independent state of Kashmir. On that score, India is nearly as bad as Israel’s occupation of Palestine.

But you never heard Keating criticise Israel, nor did he criticise Indonesia’s occupation of East Timor. Keating was the Minister for Northern development in the Whitlam Government when it allowed Indonesia to invade East Timor in late 1975. That was Fraser’s first mistake: to turn a blind eye to the killing of Timorese by the Indonesian military.

Keating was right to say that the U.S. cannot control three oceans. This is especially when the Chinese economy is bigger and is growing at a faster rate the United States’.

This what Keating had to say at the National Press Club:

I mean, there’d be outrage everywhere. So what the Chinese have been doing is, is getting what’s called in the trade sea denial, pushing the American fleet off their coast.

China is a big sea trading nation, so it wants its goods to be transported unfettered through the South China sea. The U.S. Navy is trying to challenge that; given the importance of trade with China for many countries including Australia, the U.S. government should reconsider this challenge to Chinese sovereignty.

However, Keating didn’t criticise U.S. imperialism nor did he criticise Henry Kissinger when he gave the Indonesian Government permission to invade East Timor.

Keating even quoted Kissinger on China:

Henry Kissinger said something which is worth repeating here, which is pretty much my own view if I can find it. I wrote this down a meeting I had with him. He said he did not believe China has a military base policy designed to achieve military domination. Nor is it policy about annexing contiguous territories. In other words, the country’s around it.

He thought his overarching policy objective was to keep the U.S. away from Chinese borders. He said he did not believe China wants a confrontation with the United States. He said being Chinese, the Chinese will develop a concept of coexistence.

But he left out that the U.S. Government had threatened war with China over the Taiwan Straits as long ago is 1958. The truth is United States has left its run too late. Keating is right: there will be no war over Taiwan. And if there were, Australia should keep well clear of it.

Glenn Gibson asked if Paul Keating can help with diplomatic relations with China? Keating, when in power, followed a strategy of building up the Australian bourgeoisie, in order, in his terms “to break with the branch office mentality” inside Australia and so as to strengthen it as a regional power.

In the National Press Club, Keating opposed the purchase of the nuclear subs and the AUKUS alliance. He prefers to build nationalist pride rather than dependence on the U.S. and Britain. Predictably, Keating wants to build submarines in Australia. Failing that he came up with the crazy idea of buying “off the shelf” nuclear subs from France.

What’s that got to do with the defence of Australia and what possible impact could we have militarily with eight submarines? These Virginia class submarines were designed in the 1990s. By the time we have half a dozen of them, it will be 2045 or 2050, they will be 50 or 60 years old.

In other words, our new submarines will be old tech, like buying an old 747. And here we are, we’re going to wait 20-odd years to get the first one and 35 or 40 years to get the lot for what will be then very old boats.

On the ABC’s Q&A program, Stan Grant suggested that China would be very concerned about the threat of the Australian Navy having eight nuclear submarines, despite the fact that the are not yet built, may never be built, and their delivery date is not until 2040.

By contrast, China built its first nuclear-powered submarine in 1974. With the world’s largest armed forces, China has increasingly worked to advance its naval capabilities. Beijing has at least 59 operational submarines, 12 are nuclear-powered and half of those are ballistic missle submarines (SSBNs). They make “mutually assured destruction” possible after a first strike.

Much of the public debate on commercial and public media is based on a premise of inflated importance of Australia both in the world and in respect of China.

Keating never gives up on Australian-U.S. alliance, even though China is a major trading partner for Australia.

Meanwhile, experts from the Independent Australia Peace Network (IPAN) have called for an independent and peaceful Australia.

We have received a tremendous number of submissions, many of which point to the sidelining of the Australian public from defence and foreign policy decisions, particularly in relation to its alliance with the United States.

Foreign policy is rarely discussed publicly and almost never democratically decided. However, the reluctance of politicians to discuss foreign policy is by no means reflective of the Australian public’s own interest and engagement.

Paul Keating, at the National Press Club, was in agreement with sentiments expressed by Ms Tranter.

If you go from Wuhan, a city where the rivers cross, and the railways cross; the Chinese will be the major influence between everything between Wuhan and Istanbul. Partly to increase their strategic power. And secondly, all of the old tech, which had been replaced by the new tech, that is steel, glass cement.

Ian Curr is the great-great-grandson of Australian settler and politician Edward Curr. You can listen to Ian’s podcast 4PR Voice of the People, read his blog Workers BushTelegraph and follow Ian on Twitter @WorkersBushTele.