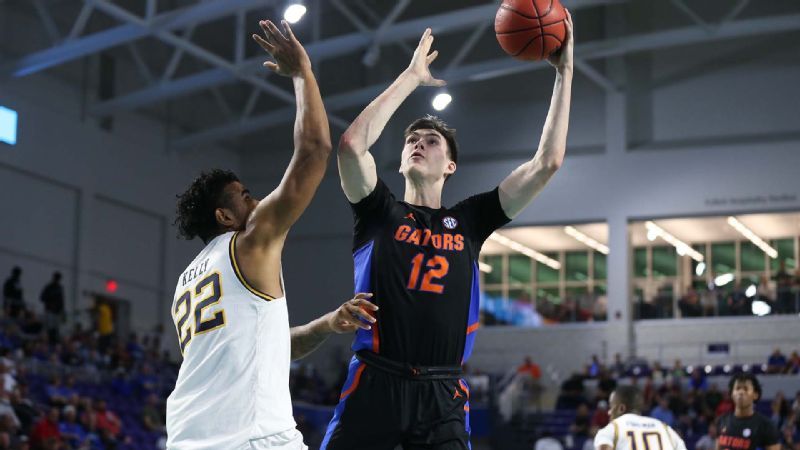 WHAT HAPPENED: Senior forward Colin Castleton had 16 points and eight rebounds, while fifth-year senior point guard Tyree Appleby threw in 15 more points to pace four Gators into double-figure scoring Monday night as the 23rd-ranked UF waxed the Bears 80-60 in opening-round play of the Fort Myers Tip-Off at Suncoast Credit Union Arena. Castleton fell short in his quest for a third straight double-double, but made six of his 11 shots from the floor. Appleby hit four of his eight shots, all seven of his free throws and added three assists. Senior guard Myreon Jones had 13 points and backup swingman Phlandrous Fleming Jr. had 11 off the bench. In the end, 10 different Gators found the scoring column on the way to shooting 51.9 percent, including 8-for-19 from the 3-point line (.421). The Bears shot 44 percent, made only two 3s and committed 18 turnovers (compared to just seven assists) that led to 19 UF points. The first 10-plus minutes were played at Cal’s methodical pace, with the Gators missing 11 of their first 17 field-goal attempts in a game that was tied at 17 before UF settled in on the scoreboard by getting to the free throw line. The Florida lead was five with five minutes to go in the half when four free throws by point guard Appleby and reserve center Jason Jitoboh, plus a 3-pointer from backup forward CJ Felder accounted for the Gators’ points in a mini-run of 7-1. They led by a dozen with just over three minutes left when Jones hit the first of three straight 3-pointers that helped open a 19-point spread, 46-27, at the break. UF went up by as many as 26 in the second and never led by less than 18, despite substituting liberally in the second half.

WHAT IT MEANS: The Gators are 4-0 for the first time in four years and now have two high-major victories on their early season resume. They not only get a chance at third Wednesday, but probably will be facing their best opponent to date. Read on.

IN THE SPOTLIGHT: Felder’s stats didn’t jump off the shee (8 points, including a pair of 3-pointers, plus 3 rebounds in 17 minutes)t, but for first time this season he showed how his size, length and strength can impact a game. Remember, he only played two minutes in the win over Florida State and came in with just five points and seven rebounds on the season. He will become more and more of a factor.

UP NEXT: Florida (4-0) moved into Wednesday night’s tournament championship game, where the Gators will face Ohio State (3-1). The Buckeyes, who fell out of the Top 25 after losing to cross-state foe Xavier last week, won an opening-game thriller against No. 21 Seton Hall earlier Monday, thanks to a 3-pointer by guard Meechie Johnson Jr. with just 2.2 seconds to play. The Pirates (3-1), who last week stunned No. 4 Michigan on the road, will face Cal (2-3) in the tournament consolation game at 6 p.m.. The championship game will follow at 8:30.