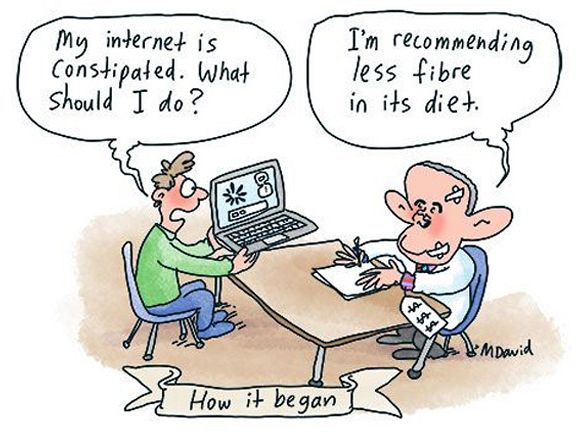 A new revelation published in The Guardian shows that the NBN is much more expensive than what the Coalition let us believe in 2013.

The beginnings of the NBN date back to the Howard Government with Kevin Rudd in the Opposition seat. Around 2005, both Parties agreed that extra money was needed to ensure that regional Australia would receive an equal quality broadband service in comparison to metro Australia.

They both estimated these costs at around $5 billion. When in 2007 the Labor Party came into office, this was the broadband plan they brought to the table and as such still had bipartisan support.

Things changed when the Global Financial Crisis (GFC) hit. At that point in time, the Government launched a range of stimulus projects including an upgrade from a regional NBN to a national NBN. The estimated costs were $41-$43 billion, with the completion of a full-blown Fibre-to-the-Home (FttH) network to 94 per cent of the population to be ready by 2020.

However, all the GFC stimulus projects were heavily attacked by the Coalition Opposition. While until that time the National Party had been one of the major proponents of better broadband for the bush, the political reality of Tony Abbott now leading the Opposition, suddenly meant a total turnaround of the National Party. They fell in line with Abbott’s policies and strongly opposed the NBN — one could argue in direct conflict with the national interest of regional Australia. Regional Australia lost one of their key broadband champions overnight.

The new revelations in The Guardian indicate a significant cost blowout. While you can argue about the 2013 data – as NBN Co and the Government do –  the bottom line is that there is a cost blowout. Malcolm Turnbull as Minister for Communication at the time mentioned he could do it for $25 billion to be ready by 2016.

Once in power as PM, he did a more proper study and mentioned that the Labor Party’s FttH plan would cost $74 billion (even $90 billion was mentioned to make it look even more dramatic) and would not be finished until 2024. He revealed that the Coalition’s NBN could do this for $41 billion and that would be ready by 2020.

Whatever way you look at the data as revealed by The Guardian or to the comments from NBN Co and Communications Minister Paul Fletcher, the reality is that the current costs of the NBN are going to be significantly higher.

As Independent MP Tony Windsor at the time commented “do it right, do it once, do it with fibre”.

NBN Co, of course, also understands the need for a much deeper deployment of fibre and has announced a range of fibre upgrades of the NBN. So much for doing it right in the first place.

This month a delegation of international internet companies will meet with the Government to exactly argue for that. They want the Government to significantly invest in full-fibre backbone infrastructure in regional Australia.

The Biden Administration in its recently approved Infrastructure Plan has put aside US$42.45 billion (AU$57.82 billion) in federal grants to states for the construction of broadband projects delivering speeds of 100Mbps/20Mbps for broadband in underserved areas. This development will also be used to put further pressure on the Morrison Government, especially in the wake of the upcoming elections in 2022.

In other words, the costs of the NBN are rising and rising. So, let’s not squabble over specific data or words used in the past or recalculations and other financial adjustments. The reality is that the so-called Multi Mix Technology, with upgrades to Fibre-to-the-Premise and FttH networks, will by the time it’s finished have crept up towards the earlier taunted $90 billion with full completion more likely sometime in the second half of this decade.