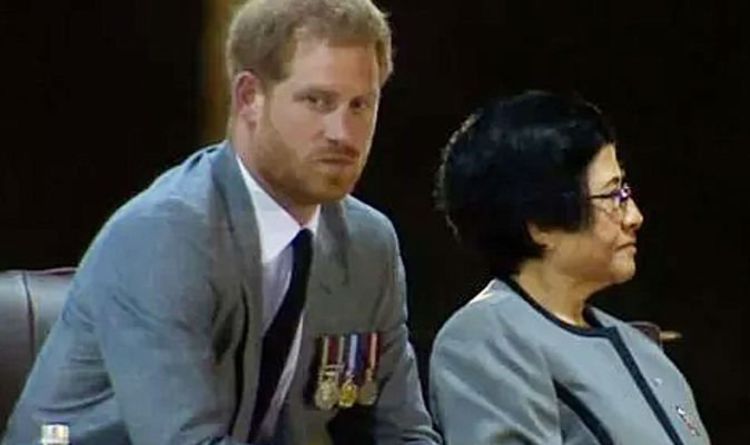 Prince Harry, 37, ventured off on a tour of Australasia with his wife Meghan Markle, 40, and a press pack shortly after the couple tied the knot in 2018. But the trip ‘Down Under’ appeared to show just how much the Duke of Sussex disliked the press.

The tour, which would see the Duke and Duchess of Sussex touch down in Australia, Fiji, Tonga and New Zealand, was held around the time of the 2018 Invictus Games in Sydney.

During the first episode of the two-part BBC documentary ‘The Princes and the Press’, The Times royal correspondent Valentine Low recalled how Prince Harry spent the opening ceremony of a visit to an Oceanic island “glowering” at the press pack.

Mr Low said: “Harry had been pretty grumpy on that tour.

“I do remember there was a long and incredibly boring welcoming ceremony in Fiji.

“And it was incredibly interesting watching them both because Meghan was sitting just absolutely perfect on a little throne.

JUST IN: ‘No morals’ BBC slammed for Royal Family documentary after Diana interview

“Harry was just glowering, he was very cross, he’s cross with the media and he spent the entire welcoming ceremony just diverting his gaze to one side just to stare daggers at the press pack.”

The Sussexes’ tour of Australasia was the couple’s second since their Windsor wedding in May 2018, having previously visited Dublin just a few months before.

However, Mr Low suggested the Duke of Sussex was equally as combative with the press during their flight from Tonga to Sydney.

Mr Low said: “Harry was persuaded by his staff to come to the back of the plane and say some things to us.

“He came back and said something to the effect of ‘Thanks very much for coming guys, not that you were invited’.

“It went down incredibly badly.”

But the BBC’s royal correspondent Jonny Dymond explained why the Duke reacted the way he did.

Mr Dymond said: “He did it not because he thought ‘I’m going to go back and insult them’, he did it because he went back, he saw us and just [gestures the Duke uncontrollably vomited it out], like that, because it is absolutely built into him.”

The BBC’s royal correspondent added that Harry “cannot bear the press” and claimed the Duke’s “visceral reaction” can be seen by the way he shuns cameras and scowls at journalists.

Co-author of ‘Finding Freedom’ Omid Scobie suggested Harry did so because “he had seen a different side to the press” since meeting Meghan.

They provided the following joint statement: “A free, responsible and open press is of vital importance to a healthy democracy.

“However, too often overblown and unfounded claims from unnamed sources are presented as facts and it is disappointing when anyone, including the BBC, gives them credibility.”

The second episode of ‘The Princes and the Press’ airs next Monday at 9pm on BBC Two.