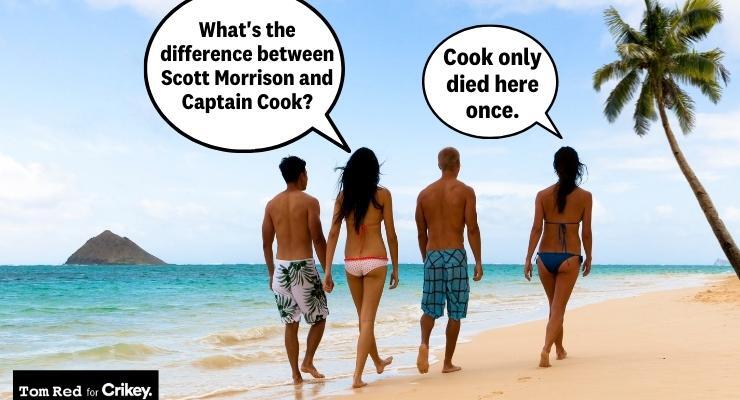 They are doing that to protect their own workers. To protect their other clients … it’s got nothing to do with ideology. And, this, you know, these issues around liberty and so on. We all believe in freedom, but we also believe in people being healthy, and the sheer fact of it is, if you’re not vaccinated, you represent a greater public health risk to yourself, to your family, to your community and others about you. So, it’s only sensible that people will do sensible things to protect their public health.

It’s bad enough that the prime minister has shredded the last vestiges of his credibility on an important issue like vaccine mandates. It’s worse still that his unapologetic backflip — right down to overriding one of his own senators to allow Pauline Hanson to introduce a stunt bill to ban vaccine mandates — has failed to prevent the government from sliding into chaos and risking his election strategy.

The government’s agenda for what could be the last sitting fortnight before the election is on hold, with the determination of Gerard Rennick and Alex Antic to withhold support for government legislation, and three other right-wingers — Concetta Fierravanti-Wells, Matt Canavan and the Northern Territory’s Sam McMahon — crossing the floor to support Hanson.

It’s as if Morrison’s constant stream of lies and falsehoods has made others disinclined to believe him when he announces his latest position on an important issue, cognisant as they are that it’s merely five minutes since Morrison said something entirely different.

This is the real cost of slowly but steadily acquiring a reputation as someone who says whatever is convenient at the time — no one believes you, and demands that you act rather than merely announce, which is what extremists like Rennick and Antic want from the PM. Angry backbenchers might previously have accepted an assurance from Morrison that he would pressure state leaders in national cabinet. But Scott Morrison’s assurances are now worthless, a barrowload of paper money in a political economy marked by a hyperinflation of bullshit.

But more gravely, Morrison’s entire election strategy — portray himself as the fearless leader of the forces of freedom from government control — is now in the balance, because people don’t believe what he says. It was already an absurd premise for the leader of the biggest government since World War II, committed to increasing the tax burden on Australians way above levels inherited from Labor. It’s made much worse by the fact that the very people he is seeking to woo, including fringe elements of his own party, don’t buy the act.

The link between the budget and the vaccine mandate issue isn’t spurious — there’s a real resentment within conservative ranks of the Liberal Party membership over Morrison’s embrace of big government stretching for years off into the future, and a view that Morrison believes in nothing.

And the questions about Morrison’s judgment keep coming. In question time yesterday, all but one of Labor questions were about Morrison’s lies, falsehoods and reversals. And the pressure paid off — Morrison produced another falsehood, about the infamous Hawaiian trip, claiming he’d told Anthony Albanese where he was going, only to be forced to come back twice and correct the record, admitting he hadn’t, with the tortured excuse that when he said he told Albanese “where” he was going, he meant “on leave”.

Peter Dutton would have been watching with interest as Morrison stumbled.