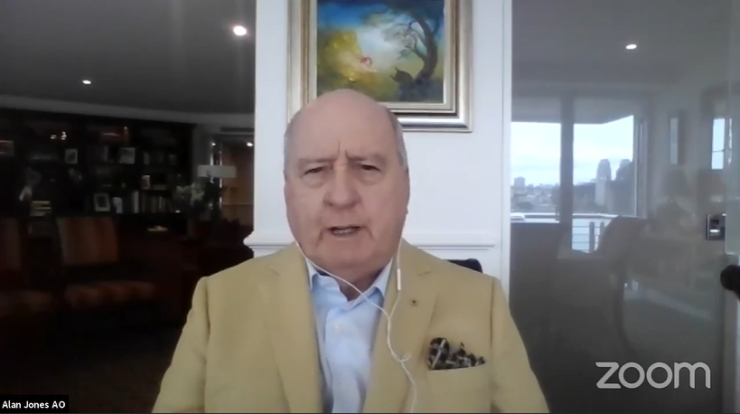 After being shown the exit from Sky News, Alan Jones has barely skipped a beat, embracing his status as an online populist shock jock.

Three weeks ago, the former titan of commercial radio was nudged towards the door by News Corp. Jones, always the fighter, took the hint and marched out rather than accepting a much-reduced role at Sky News’ new streaming service.

There was much speculation about what he would do next. Had he run out of places to go? Would bosses want to roll the dice once more on a man who always manages to attract trouble — from advertisers, regulators and courts?

Jones has pivoted to creating content directly for social media. Since finishing at Sky News, he’s posted more than a dozen editorials — long swathes of text that could have been published as a print article or spoken to camera — directly to his Facebook page. Topics have mixed global culture war subjects like critical race theory and “the great reset” — dog-whistles for his more conspiratorial followers — with local broadsides at Prime Minister Scott Morrison and Oatlands Golf Club.

His digital output has been about the same as when he worked at Sky, but with his own content rather than repurposed clips. Jones’ online following is continuing to grow, now up to 166,000 on Facebook. He has even dipped his toe into self-produced video content, hosting a virtual Q&A with former prime minister Tony Abbott and CLP candidate Jacinta Price, which racked up more than 56,000 views.

Jones hasn’t been just confined to his own digital properties either. He popped up on Sunrise on Saturday to launch an impassioned defence of cricketer Tim Paine after Paine’s sexting controversy. (Jones, naturally, plays to the audience in front of him, keeping quiet about the fringe ideas he plays up online.)

So what’s the end game?

Well last week Jones sent the clearest indication yet that he is building towards something digital. A placeholder website alanjones.com.au has appeared, offering visitors a chance to sign up and “find out where Alan goes next”. Nine papers reported that Jones had accrued 1000 subscribers in the first day.

One model Jones could follow is that of former Fox heavyweight Bill O’Reilly who, after leaving Fox News following numerous sexual harassment allegations, set up his own venture No Spin News. It went from a podcast to a live show streaming online, and as of mid-2020 has been available via conservative broadcaster Newsmax TV.

While such a path lacks the glamour and prestige of working directly for a major publisher, it also comes with the benefits of complete freedom and a chance to earn directly from an audience — something that can be quite lucrative.

It’s yet to be seen whether Jones commits to going solo or if he hopes that some other media company will swallow up his new digital organisation. But one thing is for sure: you haven’t heard the last of Alan Jones yet.