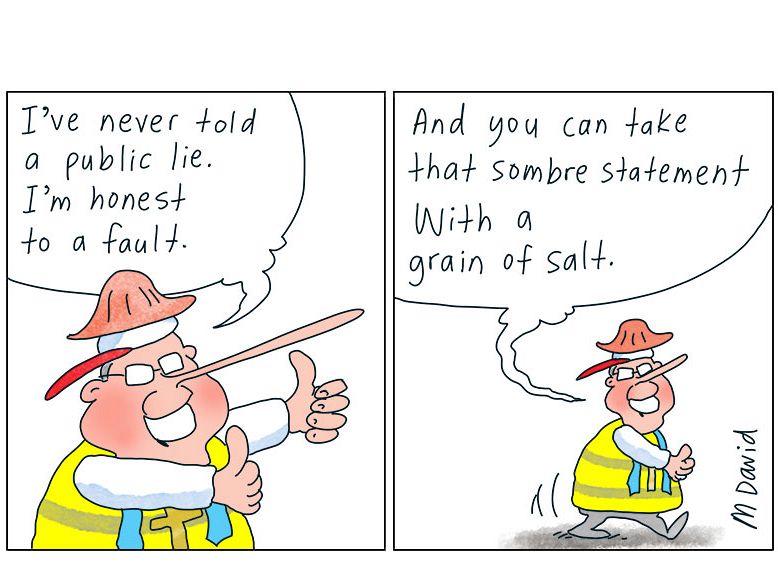 What are a few outright lies between friends, international leaders and the entire nation when you’re the Prime Minister? Managing editor Michelle Pini looks at Scott Morrison’s best porkies.

IS SCOTT MORRISON the most brazen liar in Australian politics?

It is possible that there are lies, belonging to politicians other than Morrison, that are yet to be exposed. However, going simply on his track record and the law of averages, we can make an educated guess that our Prime Minister is the biggest liar in politics today.

The interesting thing about him is that each time one of his lies is exposed, Scott Morrison – or Scomocchio as he is now known – appears only motivated to spout further, more brazen lies. This is an extraordinary reflex action for anyone in public life, let alone a prime minister.

Of course, Australians have illustrated that we have terrible memory retention but at today’s rates, it is likely that the sheer volume of Morrison’s untruths will leave an indelible mark capable of jolting almost everyone’s recollection.

It is indeed a litany of lies seemingly without end.

It’s also important to remember that, like Triple J’s top 100, this is a constantly evolving hit parade. But to keep things simple and try and ensure the PM’s most significant, biggest and fattest lies aren’t forgotten – replaced by the next national security threat or union misdemeanour, for example – we offer the following short (and by no means exhaustive) list of Scotty’s greatest lies.

This week has regurgitated the Prime Minister’s secret December 2019 exodus to Hawaii on family holiday while the nation literally burned as bushfires raged across the country.

This is a lie that keeps on giving as the PM’s office originally lied about his whereabouts. Then the PM pretended he was in Australia until photos of him sunning himself on a Hawaiian beach appeared on social media.

Now, unprompted, during Question Time in Parliament, the PM said that he had sent a text to Anthony Albanese accusing the Opposition Leader of knowing where the PM had gone. Finally, Morrison had to admit his fabrication as Albanese had retained the text message, which did not corroborate the PM’s version of events.

Scott Morrison has a problem telling the truth. pic.twitter.com/pEglM5bOKM

The Morrison Government’s vaccine rollout has been characterised by incompetence, lies and cover-ups since the pandemic began.

In September 2020, the Prime Minister announced that Australia was at the “top of the queue” for vaccine delivery. But as Australia’s vaccination schedule began in February 2021, that was never the case with 200 million vaccines already delivered worldwide.

Morrison then blamed the EU for blocking supply. He then denied ever pointing the finger at the EU, since this was promptly and categorically denied by the Commission.

The PM consequently pretended that the vaccine rollout was “not a race” – then claimed he was referring to the “vaccine regulation”, not its rollout.

Finally, Scotty went on an absurd rant, referring to Victoria’s vaccination regulations and announcing his

“…sympathy for Australians who have had a gutful of governments telling them what to do.”

Maybe the PM forgot that he championed the “No Jab, No Pay” rule back in 2016, denying access to government assistance for families with non-immunised children.

3. ELECTRIC VEHICLES ARE  A NO-GO/GO!

4. WHAT HAPPENS IN SHANGHAI…

Morrison denied referring to former Labor Senator Sam Dastyari as “Shangai Sam”. Of course, he did only use the term 17 times.

Morrison’s links with billionaire mining magnate Clive Palmer likely secured the last election for the Coalition. But given Palmer’s on-the-nose activities, these connections are probably best played down. Which explains why Scotty lied about the Government’s support for Clive Palmer’s High Court action against Western Australia’s border closures.

In answer to MP Patrick Gorman’s question on this, Morrison claimed in Parliament:

Except that in June 2020, the Australian Government filed a Notice of Intervention under s.78A of the Judiciary Act 1903, in the matter of Clive Palmer and Mineralogy v the State of Western Australia and WA Police Commissioner Chris Dawson, which stated:

‘…The Attorney-General intervenes in support of the position of the plaintiffs [Clive Palmer and Mineralogy].’

It was French President Emmanuel Macron who highlighted, with the whole world as witness, the simple fact that our Prime Minister lies.

Morrison cancelled a major defence contract for submarines with our longstanding ally in favour of a “better” offer and then lied about it. He also misled United States President Joe Biden about misleading France into believing it was business as usual.

Morrison lied to French President Emmanuel Macron. Then Scotty lied about lying to Macron, attacking the person to whom he initially lied. Then he pretended Macron attacked all Australians when the French President clearly had not.

Asked by Australian journalist Bevan Shields whether Scott Morrison had lied to him, President Macron called out a liar when he saw one:

SHIELDS: Do you think [Morrison] lied to you?

MACRON: I don’t think, I know.

Have we told you the one about the Prime Minister of Australia?

The PM is asked on radio:

“Prime Minister, have you ever told a lie in public life?”

To which the PM replies:

Anyone would think Scott Morrison was a pathological liar! Oh, wait…

This is an abridged version of an editorial originally published in the IA weekly newsletter. Subscribe now to read the full version online in the IA members-only area.