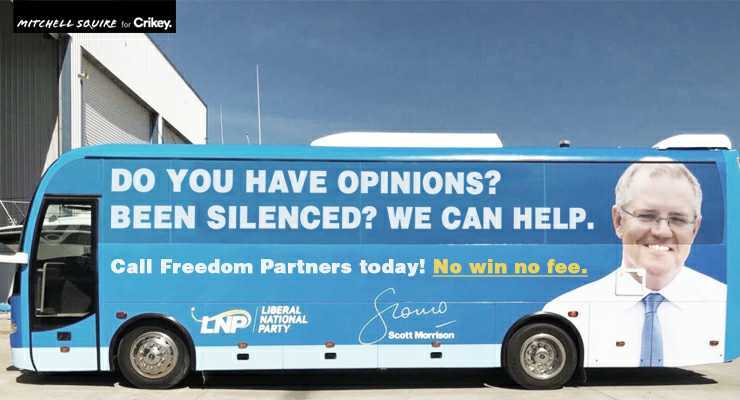 Scott Morrison might be resigned to his religious discrimination bill going to a Senate committee — even a joint committee — and therefore not being passed before the election, but be in no doubt it is personally important to him. Not for anything to do with religion or his faith, though. It is a core part of his reelection strategy of appealing to discontented right-wingers and manufacturing a narrative around freedom versus government.

Morrison’s “freedom” narrative is the rebadging of an existing right-wing strategy from the United States which has served Donald Trump, the Republicans and even more extreme elements very well: convincing socially privileged, powerful, usually white, usually male people that they are the victims of a powerful progressive agenda aimed at harming them in favour of “minorities”, aka most of the population — women, people of colour, LGBTIQ people, people with disabilities.

It’s a variant of a long-standing conservative tactic of using cultural, racial and social issues to distract people from structural causes of inequality and economic discontent, which has been successful for over a century. These days it is no longer clothed in the language of the pre-civil rights south, but uses more modern baggage — the anti-Semitic “cultural Marxism” trope, the “critical race theory” fiction, the myth of a feminist assault on men, the warnings that religion is under threat from secular (or, in the US, where such adjectives are taken seriously, “satanic”) forces on the left.

As that list shows, this is a tactic that in its current form is fully imported from the US, where aggressive religious groups have far more effectively suppressed basic freedoms than in Australia, but far more aggressively portrayed themselves as victims while doing so.

Trump weaponised this tactic so successfully vast numbers of religious Americans were prepared to overlook his deeply irreligious behaviour and support him, as he cultivated an image as the saviour of Christian America, prepared to teargas Black Lives Matter protesters to “defend” a Washington church he could pose in front of.

At the core of the Trump/heaven-sent concept was the lie that religious freedom in the US was under attack. Morrison trades on the same lie here, that there is some kind of threat to religious freedom.

There is no restriction on or threat to religious freedom in Australia; indeed, albeit to a lesser degree than in the US, religion occupies a privileged place in society, ranging from enjoying billions of dollars in tax concessions to public funding for religious education and exemptions from anti-discrimination laws. And religious people are overrepresented on both sides of politics compared with the Australian population.

Morrison’s bill would further strengthen this position of privilege, overriding state laws aimed at ensuring non-discrimination in employment and protecting offensive speech on religious grounds. As in the US, legislation aimed at protecting religion from attack in fact strengthens its already privileged position.

The legal consequences of the government’s bill, however, are less important than the message Morrison wants to send with it. It’s the same message he is sending when he tells extremists and those making death threats to politicians that he “understands their frustration”, when he says it’s time for governments to pull back from telling people what to do (while running the biggest government since World War II and the highest-taxing since the Howard years) and that he’s all about freedom in contrast to Labor.

That message is that people with considerable privilege and power — tax-protected churches which broke sexual assault laws and community norms for generations with impunity, Pentecostalist church groups operating like corporations and exploiting their ties to the top of politics, religious lobby groups with entry rights to the ministerial wing of Parliament House despite a track record of vilifying and demonising LGBTIQ people — are the real victims in Australia. That they are under assault from a tide of secularism that is destroying not merely the freedom of religious Australians but civilisation itself.

The other deep lie within the government’s bill is that this purported exercise in freedom in fact curbs freedom (similar to the way the government’s response to terrorists who “hate us for our freedom” is to curb our freedom). Freedom of employment free of discrimination for LGBTIQ people, for women; freedom from abuse and bigotry for anyone who happens to trigger a religious person’s hostile instincts, freedom for professional groups to set standards of conduct for their memberships.

Direct from the Trump playbook, this is about selling victimhood to some of the most powerful in Australian society, and selling the God-sent Morrison as the saviour — capitalise it or not, as you like — who will protect them.