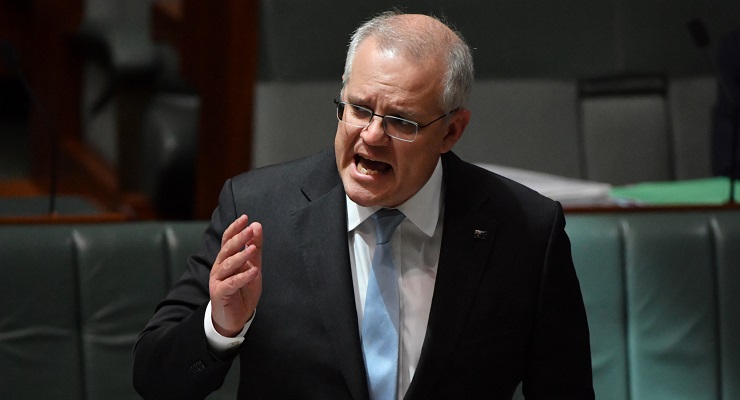 The prime minister has slammed the corruption watchdog in the country’s most populous state as a “kangaroo court” and told critics of his federal watchdog model — described as toothless — to basically take it or leave it. The spectacular outburst came after Tasmanian Liberal Bridget Archer made good on her threat and crossed the floor over Morrison dragging the chain — gutsy considering her seat of Bass is marginal. The Conversation’s Michelle Grattan reckons that the uprising of the moderates is in response to the loud voices in the Liberal right, described to her as “asymmetrical warfare”. What a week — The New Daily has a cracking breakdown of the five big scandals that disrupted parliament in the last four days.

Morrison continued that former premier Gladys Berejiklian’s treatment by NSW’s ICAC was “bad process and an abuse” — just to recap, she was being investigated because while treasurer and then premier Berejiklian was secretly dating then-MP Daryl Maguire and has been questioned over grants that were given to him, as Guardian Australia explains. Why the sudden support for Berejiklian? Maybe it’s a sign the rumours are true and her next gig is the federal seat of Warringah, AFR‘s Phil Coorey muses.

Speaking of ICAC — two land councils have complained about what they say is an over-representation of self-identified Indigenous staff and students at the University of Sydney, The Australian ($) reports. The councils — representing 40,000 Indigenous people — told ICAC the uni is failing to check the bona fides of the people receiving resources and access to programs intended for Indigenous people, including jobs, scholarships, earlier enrolments, and lower minimum ATARs. Metropolitan Local Aboriginal Land Council’s Nathan Moran met with the uni’s vice-chancellor to complain but he implied it fell on deaf ears.

There are big changes on the way for NSW — people won’t need a mask anymore unless they’re on public transport, planes, at airports, or are unvaccinated hospitality staff. The relaxed rule will come in on December 15, or when 95% of the state is double vaccinated — whichever comes first, ABC reports. And QR code check-ins will only be in risky settings like hospitals, aged and disability care facilities, gyms, places of worship, funerals, and beauty businesses, the SMH adds. About 92% of the 16-and-older population in NSW are double-jabbed at the moment.

Further north, the NT’s leader has slammed “tinfoil hat-wearing tossers, sitting in their parents’ basements in Florida” making up stories about children being forcibly vaccinated and Indigenous people being forced from their homes. The remote town of Katherine is in a seven-day lockdown amid a COVID cluster that has grown to 52 cases, ABC reports. The conspiracy theories may have spiralled after the ADF’s deployment in the area — Guardian Australia reports NT Chief Minister Michael Gunner clarified “they aren’t carrying weapons — they are carrying fresh food”, while Aboriginal health worker Luke Ellis explained some people are being careful and temporarily moved because isolating can be a problem when “20-30 people live in one home”.

UNREST IN THE SOLOMON ISLANDS

Australia is sending 43 defence force personnel and 73 Australian Federal Police to the Solomon Islands after the archipelago entered its second day of civil unrest, the ABC reports. Photos show the damage. Its capital city, Honiara, is seeing large crowds calling for the resignation of their prime minister, Manasseh Sogavare — they’re angry about government services, corruption, and the government’s closeness to China, after Sogavare broke ties with Taiwan to side with China in 2019, The Age explains. The premier of the most populous of the 12 islands’ reckons he was offered a bribe to support the switch.

Prime Minister Scott Morrison says we’ll hopefully help provide stability and security so the constitutional processes can take place, but we won’t get involved in the island’s “internal affairs”, as The Australian ($) reports. The Oz’s Greg Sheridan writes that it’s a good move — humanitarian reasons aside, it helps limit China’s influence in the South-Pacific — but pointed out the last time we helped restore order, in 2003, it lasted more than a decade.

If a sleep-in is on the agenda this weekend, might The Guardian’s Emma Beddington suggest a couple of other things, too? Beddington set out to test the seven types of rest. “We can’t function forever fuelled by adrenaline and caffeine, fogged brains scrabbling to function, nerves frayed like a cheap phone cable,” she writes. So she dove into physician Saundra Dalton-Smith’s prescription — rest found in physical, mental, emotional, social, sensory, creative and spiritual ways.

For physical rest, Dalton-Smith suggests a little body fluidity, like rolling the neck, clenching and unclenching the hands, and rocking on one’s heels while standing. For mental rest, Dalton-Smith suggests the pomodoro technique — no social media or emails for 25-minute blocks of work, with a five-minute break at the end. For emotional rest, reduce time with people who drain you and for social rest, prioritise people who make you feel good (for Beddington that meant going to her sassy longtime hairdresser for a cut and a chat). For sensory rest, be aware of extra sound around the home, like switching off that yappy television in the background. For creative rest, Dalton-Smith suggests we build mini sabbaticals into our daily lives, where we do something we love but maybe don’t get around to most of the time. And for spiritual rest — what she describes as a feeling of “needing to be really seen, that our life has meaning” — it could be as simple as spending a brief half-hour in a quiet meditation class.

Have a restful weekend ahead.

We have to veer away from the artificial, phoney conflicts, boycotts, controversies and cancelling created by anonymous and cowardly bots, bigots and bullies.

The PM is at it again with his usual Dr Seuss tongue-twisters. It’s an interesting line to take considering rugby union star Israel Folau’s post about gay people going to hell was what largely kicked this whole religious freedom conversation into the spotlight. Morrison says bigots shouldn’t create controversies and phoney conflicts — that’s true, but perhaps not in the way he meant it.

“Minister for the National Disability Insurance Scheme Linda Reynolds is calling for states and territories to increase their contribution to the scheme, arguing the program is coming over cost and was never intended to function as a ‘welfare scheme for life’.

“But experts say there are several issues with Reynolds’ claim. Firstly, the NDIS is not welfare, and has never functioned as such. Secondly, there is limited data to explain the ‘cost blowout’ the Coalition have complained about in recent months.”

“Experts have warned the lack of clarity in the bill could impact safe access zones around abortion clinics and allow doctors, nurses and pharmacists to make statements stigmatising women or members of the LGBTQI+ community.

“Much of the bill is still muddy. This morning, assistant attorney-general Amanda Stoker said whether schools could fire gay teachers depends on ‘what the school is prepared to be upfront with the community about now’ — meaning if homophobia was embedded in their faith, they likely could.”

“Michael Yabsley’s Dark Money isn’t merely a 10-point plan for reform of political donations and election spending, aimed at decoupling donations from policy and decision-making, but the extended screed of a former insider who has turned on the system he mastered and is determined that voters should understand just how dangerous it is …

“There’s a palpable hit on every page as the former federal treasurer of the Liberal Party opens fire.”

Flood management in [Canada’s British Columbia] is left up to municipalities. Should it be? (CBC)

We’ll never give up an inch, Jakarta signals China (The Australian) ($)

Channel tragedy: Whose lives were lost off Calais? (BBC)

LeBron James gets fans ejected from courtside on return (CNN)

The jailing of a young climate protester is a prime example of Australia’s authoritarian drift — Isabelle Reinecke (Guardian Australia): “The jailing of a 22-year-old climate change protester is a prime example of this authoritarian tendency. Eric Serge Herbert was sentenced to 12 months in prison for his part in a two-week anti-coal protest under the banner of Blockade Australia. Herbert had blocked a coal train by climbing it in the Hunter region of New South Wales …

“Australia is the only democracy in the world without a national human rights framework. Australians do not enjoy a universal right to protest, protected by law, even though our history is littered with popular movements and disruptive protests that have helped to create modern Australia … It is helpful to contrast the treatment of the ‘freedom protesters’ in Victoria — who erected gallows in front of the parliament and called for the execution of elected officials — with the sentences meted out to those who protest Australia’s extractive industries by causing a nuisance.”

Why a return to ‘normal’ is sparking career changes down a more rewarding path — Bruno Doring (The Age): “Very often, people get trapped in jobs using their dead skills. In careers counselling, this is a term we use to refer to skills you use every day but ones you don’t necessarily enjoy which can lead to burnout. Take a step back and look at what you enjoy doing and, equally, what you don’t enjoy doing. Conduct an audit of your personal strengths and weaknesses to consider what you’ve got in your toolkit that could transfer to another industry.

“Taking the leap and committing to a career change can be daunting. You’re probably held back by stability, good income and letting go of a job that’s served you well. All valid concerns, but job satisfaction bleeds into many aspects of life. Work accounts for over a third of our time, so having a career that’s aligned with your passions can drastically improve your mental health and feeling of purpose. However scary and terrifying a career change may seem, know that it could be the best decision you’ll ever make.”