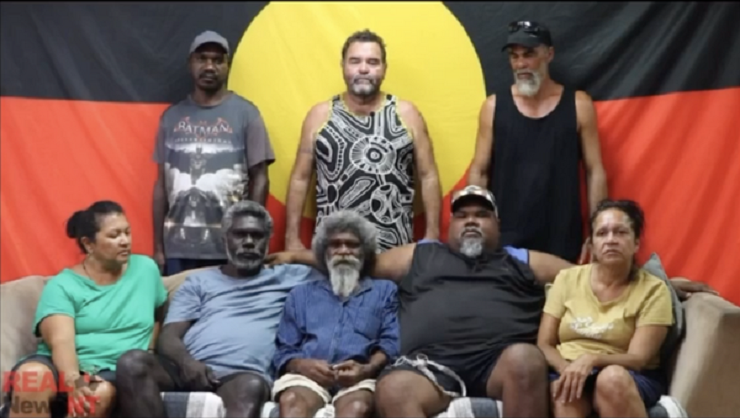 Positioned in front of a giant Aboriginal flag, a group of First Nations people speak one after another about the Northern Territory (NT)’s COVID-19 response.

The eldest, wedged between others in the middle of the couch, speaks briefly but generally about a need for unity and sovereignty. The next speakers are more specific: they rail against lockdowns (“corporate tyranny government”) and claim that COVID-19 vaccination programs are genocide.

A 14-minute video of these speeches was posted to an independent news publisher’s website on Wednesday, where it got 30,000 views in the eight hours before it was removed. Another version posted by an anti-vaccine Instagram account that purports to be run by Indigenous Australians has 100,000 views and counting.

But the harsh lockdown recently imposed on parts of the NT have provided fertile conditions for misinformation. In remote communities like Binjari and Rockhole, where daily temperatures are north of 40 degrees, hundreds of residents have been ordered not to leave their homes — sometimes with 20 people to a two-bedroom house — for any reasons other than emergencies or medical care. Close contacts of COVID-19 cases in the communities have been transported to the Howard Springs quarantine camp, with the army brought in to provide transport and food supplies.

Now, anti-vaxxers and other bad actors from the NT, around Australia and abroad, are capitalising on the tough measures and confusion to spread conspiracy theories on social media, including some targeting Indigenous Australians, to sow discord. Claims have ranged from suspicion around quarantine camps (the same ones that international travellers quarantined in) to far-fetched ideas of forced vaccinations, military takeovers and mass deaths from vaccines.

A statement by Traditional Owners in Binjari and Rockhole refuted claims of forced vaccinations, deaths or an army takeover, NITV reports. They criticised the claims on social media that they say don’t match what’s happening on the ground: “People on social media saying that our people are being mistreated need to realise their comments are hurting the very people they claim to care about.”

Misinformation around the quarantine camps has dominated social media, according to social media analysis tool BuzzSumo. Of the top 10 pieces on content across Facebook, Twitter, Pinterest and Reddit in the last week featuring the keywords “Australia” and “quarantine”, only two are from mainstream publications. The rest — including the entire top five — are either from international conspiracy or fringe publications or accounts that have promoted or dog-whistling conspiracies, such as far-right libertarian blog ZeroHedge. The same trend goes for “Howard Springs” and, to a lesser extent, “Northern Territory” — showing that the most viral viewed content about what is going on is coming from unreliable or discredited voices.

User-generated content by individuals on social media has also played a large role in misinformation during the lockdowns. Viral posts about second-hand accounts about what’s happening have been circulated as fact, despite first-hand accounts disputing them.

A Facebook Live from the personal Facebook account of June Mills — who has attended previous anti-vaccine and anti-lockdown “freedom” rallies and believes that vaccinations are a scheme to kill Indigenous Australians — captured the Larrakia elder claiming she wasn’t able to contact anyone who had been transported to the quarantine facility.

It was viewed more than 70,000 times on her own account, but widely shared beyond that by Australian anti-vaccine influencers and groups on Telegram, Instagram and TikTok.  (For comparison, a Facebook Live done by Mills on another topic a week ago received fewer than 500 views and 5 likes).

Voices sharing unproven claims like this have been elevated by existing anti-lockdown and anti-vaccine networks. As the Age reports, Melbourne-based anti-vaccine campaigners such as Reignite Democracy Australia’s Monica Smit have amplified these secondhand and spread misinformation further. US-based rapper and bounty hunter turned COVID-19 conspiracy show host Stew Peters interviewed Sydney-based anti-vaccine activist Maria Zeee, who again repeated claims that were shared to Peters’ 313,000 Telegram followers. These networks reinforce themselves: bigger influencers source local misinformation and broadcast it back to local activists who believe it.

Those who’ve tried to counter misinformation have earned the wrath of online fringe communities. Ernie Dingo was inundated with death threats after he began touring northern Western Australia promoting vaccines.

One major source of misinformation has been David Cole — who also goes by the name Lurnpa Lurnpa — a NT youth worker who is a leader of the Original Sovereign Tribal Federation. The Federation, which claims to have registered dozens of tribal groups, blends a push for Indigenous sovereignty with sovereign citizen ideology, a pseudo-legal movement that refuses to acknowledge the authority of governments.

Along with fellow leader Mark McMurtrie, the pair have promoted “legal advice” that laws do not apply in Indigenous communities for more than a decade. Followers have cited their baseless ideas as defences in court, unsuccessfully. The pair have links to broader conspiracy communities: McMurtrie co-owns a company that tried to develop property in NSW that has a relationship with disgraced celebrity chef Pete Evans, and the Federation signed a short-lived memorandum of understanding with Rod Culleton’s Great Australian Party.

Continuing a trend of cross-pollination between sovereign citizens and other conspiracy movements, Cole has seen a boost in popularity as he embraced anti-vaccine ideas during the pandemic. A speech at an anti-vaccine, anti-lockdown rally where he falsely claimed vaccines were “premeditated genocide” earned him a rebuke from NT Chief Minister Michael Gunner and were the subject of a confrontation by Larrakia traditional owner and elder Dr Aleeta Fejo.

Despite this, Cole has continued to propagate lies through Facebook, Instagram and YouTube. He is one of the seven people speaking in the 14-minute viral video where he calls the vaccine a bioweapon. Another Facebook post from his personal account purporting that hundreds of people in Robertson River and Binjari were forced to get vaccinated has been shared more than 500 times, and screenshots of the post have been circulated even further. He called for international intervention in an interview with Riccardo Bosi, a conspiracy theorist who leads fringe political party Australia One who has called for Australian politicians and media to be executed.

What distinguishes Cole and others’ rhetoric from typical misinformation is how they tie in the traditional abuse and mistreatment of Indigenous Australians to lend credibility to their claims.

Early in the pandemic, anti-vaccine influencers promoted a 1970s book by a Greek Australian that rejected “medical racism” of vaccines given to Indigenous Australians and instead promoted the experimental treatment of massive doses of vitamins. The echoes of historic injustices such as the Stolen Generation and the NT intervention provide credence for ideas like a military takeover. Cole ties claims of an “experimental vaccine” with other government policies: “They tried the universal card, the basic income card”, he cites as proof of the government’s willingness to treat Indigenous Australians as guinea pigs.

Comments by the Chief Minister Gunner that criticised those opposed to lockdowns and mandates as “anti-vax” and other criticisms also added fuel to the fire.

Luke Ellis is a 33-year-old health worker currently in quarantine in Howard Springs after testing positive for COVID-19 who took to Twitter to dispel myths about what was happening. He called out anti-vaccine campaigners whose interest in the welfare of Indigenous Australians began after lockdowns.

“​​To see so much bullshit being shared around, especially by people that have no love for indigenous people suddenly jump on the ‘genocide’ bandwagon when it suits them is fucked,” he tweeted.

“To try use us as props now is disgusting.”